Virgon is a planet located in the Core of the Cyrannus Galaxy, notable for being one of the Twelve homeworlds of the Libertus. Often considered to be Capricaerón's major rival in basically everything, the two culturally similar worlds were often at odds due to the history of Virgon’s imperialisation. There was a time, before the Intercolonial Wars, that the Virgon Empire was known across the systems as the sole superpower, a nation that none could compare to. This ended with the constant feuds with Virgon's equally imperial rival Leonae, while the rise of Capricaerón did much to limit the power of Virgon in the Four Systems.

In the aftermath, the Virgon Empire’s power dwindled, and its royal family lost power to the democratic parliament. After the Intercolonial War, the Virgon Empire was dissolved and it joined the new unified government -- the United Worlds of Calithilaen. Still, conflicts remained quite close to home; the moon of Hibernia was a thorn in the side of the Virgons, leading to a civil war which resulted in the independence of the Hibernian Republic as an independent nation within the United Worlds. Though the two powers are now close partners within the Twelve Worlds, the war did much to damage Virgon prestige.

Though well-regarded as one of the most prosperous colonies known for its splendour and opulence, Virgon is perhaps most famous intergalactically for being the homeworld of the Dvottie, a species famed throughout the Gigaquadrant for their visually appealing appearance. Though Virgon was attacked by the Cognatus during the Intergalactic War, the prideful Virgons consider their world to be the safest in the Twelve Worlds. Nevertheless, it is also one of the most pro-Imperial worlds within the New Cyrannian Republic, a point of considerable tension amongst the Twelve Worlds.

Like the other worlds in the Four Systems, Virgon was settled by tribal Libertus in the distant past by Oikoumene artificial intelligence constructs in a bid to ensure the survival of the species. A warm, temperate world, these early Virgons made good use of the plentiful natural resources found throughout the planet, expanding from the central continent—which had split from a large supercontinent in the recent geological past—to cover every corner of the globe. Though many forms of government arose from Virgon's early modern period, it would be the constitutional monarchy based out of the opulent city of Albionis which would come to unite the globe, forging the Kingdom of Virgon, which would in turn give rise to the Virgon Empire when the natives began branching out throughout the Four Systems.

Spreading throughout the Four Systems, Virgon would heavily influence the culture and languages of many of the other Worlds, with Piconae and even Capricaerón falling under the banner of the "Imperial World", though in the latter case, Virgon's hold was quickly broken. The First Intercolonial War was fought between the Virgon Empire and the nearby Leonae Empire, a civilisation regarded by the Virgon monarchy as their world's existential enemy. Embroiling most of the Calithilaen System, the bout ultimately resulted in the collapse of both imperial regimes, resulting in the rise of worlds such as Capricaerón and Taurophon in the inter-war period.

Nevertheless, Virgon would remain one of the most prosperous worlds in the Four Systems and became closely allied with the Unified Capricaerón Government in the period leading up to the outbreak of the Second Intercolonial War. During this period, Virgon saw internal conflict when the colony on its moon Hibernia revolted against monarchical rule. A short, though vicious, war was waged between Virgon and Hibernia, which ultimately ended in the independence of the moon by a Capricaerón-brokered peace agreement. During the Second Intercolonial War, Virgon fought alongside Capricaerón against Taurophon and Cancerti in a conflict which ultimately resulted in the formation of the United Worlds of Calithilaen—the unified government of the Twelve Worlds.

Even with the formation of the United Republic of Cyrannus in 53 BNE, Virgon remained an oddity within Libertus space. It maintained a monarchy—a point of considerable derision amongst the more democratic-minded colonies of the Libertus. Nevertheless, the inhabitants of Virgon maintained a strong emotional attachment to the entirely ceremonial leaders, proud of their history as "Imperial Virgon". Despite Virgon's importance within the Four Systems, it did not face the same magnitude of attack during alien invasions such as the Trucinex War and the Intergalactic War, though a small skirmish did erupt between the Cognatus and the Republic fleet during the final days of the war.

Under the Galactic Empire of Cyrannus, Virgon was briefly considered to house the Imperial administration overseeing the governance of the Twelve Worlds, an idea which was ultimately dismissed due to the abiding power of Capricaerón. Nevertheless, Virgon tended to be highly supportive of the Imperial government, to the point where statues of the Galactic Emperor Tyrómairon began replacing those of the Virgon Royal Family. When the New Cyrannian Republic gained jurisdiction over the Twelve Worlds, public opinion on Virgon was dubious—particularly when the Republic government dismissed a noted Imperial sympathiser within the Royal Family who had been supplying Imperial spies with information on Republic fleet movements in the Calithilaen System.

During the Second Great Cyrannus War's second year, Virgon, as with the rest of the Twelve Worlds, was attacked by the Galactic Empire of Cyrannus. During the subsequent battle, Virgon held out against Grand Admiral Sarcophoneus' fleet, until word reached the planet's prime minister that nearby Libraen had fallen. Two hours later, on behalf of her government, Queen Renestrae officially surrendered the planet to Imperial forces.

A world of opulent cities and a proud people, Virgon is home to the finer things in life, setting the style in the latest Libertus fashions and trends. A secular world, much like Capricaerón, most Virgons have little time for religious or spiritual pursuits in favour of Libertusian art and culture. While these qualities are similar in many respects to a typical Libertus world, Virgon stands as an oddity—due to the abiding presence of a monarchy. Though the Virgon Royal Family has gradually ceded executive powers to the planetary parliament over the centuries, it remains synonymous with Virgon's prestige and stature. Nevertheless, though the monarchy is much loved by the Virgons, throughout the rest of the Twelve Worlds, it is viewed as a humorously archaic system of little relevance to modern galactic politics.

Like Capricaerón and Taurophon, Virgon's fauna is dominated by reptiles and saurians. On land, archosaurians are the dominant lifeforms, with large herbivorous sauropods dominating the vast blue plains, while smaller herbivores such as Sulcatusaurus are often found in the dense conifer forests. These animals are preyed upon by theropods such as Anaxosaurus, which can grow up to twelve metres long. Despite these iconic and fearsome beasts being well-known amongst the Twelve Worlds, it is the humble Dvottie which most associate with the planet. An affable and appealing creature, Dvotties are found throughout the First Gigaquadrant as one of the universe's most popular pets. 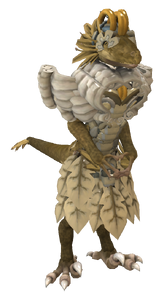 HRH Renestrae LXIII
Kingdom of Virgon
The current queen of the Kingdom of Virgon, Her Royal Highness Queen Renestrae LXIII fulfills an entirely ceremonial role within Virgon's largely vestigial government, which in turn plays a role in the equally vestigial United Worlds of Calithilaen. Per royal protocol, the political affiliations of Renestrae are entirely unknown, though most consider her to favour the New Republic in the Cyrannian Cold War—despite more than one of her relatives being arrested as Imperial spies. 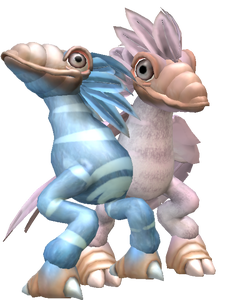 Dvottie
Deity
The Dvottie are a species of avian native to small island of Dvott in Virgon's northern hemisphere. In the location in which they evolved, there was a lack of natural predators resulting in the development of the dvottie as a naturally inquisitive and "friendly" lifeform. When the Libertus of Virgon made contact with the other Twelve Worlds, the Dvottie became popular pets throughout the Four Systems, becoming the pets of civilians and leaders alike. This led to the Dvottie becoming popular throughout Cyrannus, the Cyrandia Cluster and the entire First Gigaquadrant. 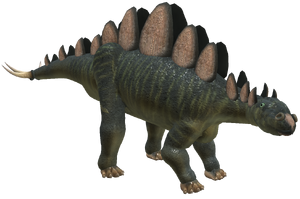 Sulcatusaurus
Stegosaur
A heavily built herbivore, Sulcatusaurus are perhaps the most recognisable Virgon dinosaur, known for their tail tipped with spikes and a distinctive array of plates along their back. These plates were used for a variety of functions, such as attracting a mate, warding off predators and thermoregulation. Though they may appear fearsome, Sulcatusaurs are qenerally quite gentle and were domesticated in the distant past by tribal Virgons, no mean feat given the low brain capacity of the Sulcatosaur. 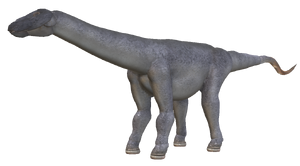 Tithonosaurus
Sauropod
The largest animal in the Four Systems, Tithonosaurus can reach up to fifty metres in length—symbolising in the minds of the native Virgons, the might and majesty of their homeworld. Though found throughout the planet, Tithonosaurs have been observed to prefer the semiarid regions close to the equator, particularly when these environments include large swamps or lakes. Though the massive size of a Tithanosaur is generally enough to ward off potential predators, they are highly social animals living in herds of many hundreds for protection. 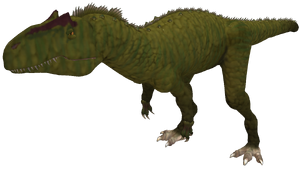 Anaxosaurus
Therapod
The apex predator of Virgon's forests and plains, Anaxosaurus is an eleven metre long theropod with large claws, strong jaws and a mouth fully of razor-sharp teeth. Though Anaxosaurs are proficient hunters when solitary, they have been known to engage in pack tactics against massive prey such as Tithanosaurs or dangerous foes such as a male Sulcatosaur. Nevertheless, Anaxosaurs are generally quite territorial when dealing with their own kind and seldom take well to incursions into their claimed territory. 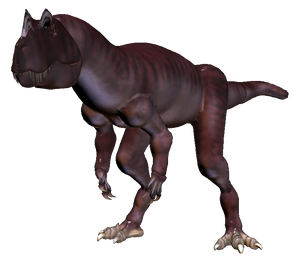 Nasicosaurus
Therapod
Nasicosaurus is a genus of theropod dinosaur native to the southern plains of Virgon's largest continent. Although it often lives alongside the larger Anaxosaurs, it occupies a separate ecological niche, and tends toward opportunism, being more likely to seek out carrion rather than make their own kills. Nevertheless, gangs of Nasicosaurs are feared by the herbivores of Virgon, and have even been known to harass lone Anaxosaurs.

Albionis is the capital of Virgon and was once considered to be the most important cities of the Twelve Worlds, a position which was ultimately taken by Capricaépolis on Capricaerón. Located along the banks of Dvoskiran River, Albionis is most known for the grand Royal Palace of Virgon, a vast building located within the Queen's Landing quarter of the city. Dating back to 1400 BNE, the Royal Palace is an architectural marvel which many have attempted to replicate on other worlds throughout the years, most noticeable on Virgon's colony of Cybele in the Cruan Sector. Beyond the walls of the Palace lies a distinctly modern city a world apart from the old-world style of the Palace, inculcating many Capricaerónan styles and even some inspired by the galactic capital Orbispira. Considered to be one of the galaxy's cultural capitals, Albionis is highly influential in the fields of art, fashion and HoloDomain entertainment.

The entrance to the Royal Palace

“A monarchy in the Core Worlds? How bizarre.”

“You know you're doing well if you can get an apartment in Albionis. I should really book a spa day there with Claire.”

“Tigarlu's people come from there. Would recommend exploding place completely.”

Retrieved from "https://spore.fandom.com/wiki/Planet:Virgon?oldid=796292"
Community content is available under CC-BY-SA unless otherwise noted.