“Though once considered a small planet, Venetia will be forever immortalised as the bastion against which the forces of order faced down the forces of evil and emerged victorious.”

Venetia is a planet in the Coru Secundus region of the Cyrannus Galaxy and an Ermitant colony loyal to the New Cyrannian Republic. Founded in 03 NE, the Ermitant loyal to the ideals of their own fallen republic hoped to build a new life on the planet away from the nefarious forces of the Bisistar Domain. However, the Bisistar soon found the planet, sparking the Great Battle of Venetia, a cataclysmic conflict between the Bisistar and the united forces of the Pax Infinitus Armada of the Mou'Cyran Accords, the latter of which was ultimately victorious.

After the battle ended, civilisations from across the universe became involved in the reconstruction of the planet, which was transformed from a wartorn ruin to a verdant paradise of life and civilisation. Though the planet prospered throughout the following decade, during the Second Great Cyrannus War, it was conquered by the Imperial Navy during the opening stages of the conflict, though it was subsequently liberated by the New Republic during the Liberation of Coru Secundus.

“Those are my people down there sir... How many of them are dying as we speak?!
"Too many. But there will be more if we can't find a way to save them. Keep focused and we'll emerge victorious.''”

- Lieutenant Relgalll and Fleet Admiral Willelmus Cretacea during the Battle.

Venetia was founded as a colony of the Ermitant loyal to Milinitt Loransia in 03 NE, soon after they became members of the newly formed New Cyrannian Republic. Though planning to finally live in peace since their ordeals during the Cyranai Civil War, they were tracked down to the planet by the nefarious Bisistar Domain, which besieged the planet with deadly World-Eaters. Rallying the forces of the newly formed Mou'Cyran Accords, the New Republic's response was swift, sending a massive allied fleet to the planet to fight off the Bisistar.

The resulting Great Battle of Venetia was considered one of the largest battles fought in the Gigaquadrant since the War of Ages and saw much destruction on both sides of the conflict. Ultimately though, the Bisistar fleet fell to the might of the allied forces, which liberated the planet and saved the native population from annihilation. In the aftermath of the battle, Venetia saw a massive reconstruction effort spearheaded by the Republic and several other members of the Accords who vowed that such an attack would not happen again.

To the horror of the people of Venetia, their beloved Senator Milinitt was present on Mou'Cyran when it was destroyed by the Empire at the beginning of the Second Great Cyrannus War. Several months later, it was occupied by the Imperial Navy for three months, before the New Republic captain Tymonir Vargeryan liberated the planet in 16 NE.

Like all New Republic planets, Venetia is a cosmopolitan melting pot of hundreds of different species and yet the peaceful Ermitant are by far the most common, making up at least eighty percent of the population as of 05 NE. Most of the planet's population reside in large cities along the southern coast of the northern continent which mix the architectural splendour of Libertus cities with those employed by the Ermitant throughout their long and hallowed history. In the aftermath of the Great Battle of Venetia in 04 NE, the planet also became home to a sizeable number of extragalactic individuals, many of whom loyal to the tenets of the Mou'Cyran Accords.

Venetius City is the capital and largest city on Venetia, being home to the planet's parliament and many of the financial institutions created by the profit-minded Ermitant. Founded in the opening months of 04 NE, the city was still under construction when the Bisistar Domain attacked, deploying massive tripodal walkers with the intent of exterminating the Ermitant. During the Battle that followed the city was ultimately saved primarily through the efforts of the Indoctrinate Collective warrior Gavakar, who defeated the Bisistar commander Catulus in combat sparking a chain of events which would lead to the Bisistar defeat.

After the battle, the Republic Senate concentrated its efforts to repair and rebuild the city, deploying defences capable of detering another planetary invasion. In the second month of 05 NE, the Universal Trading Union opened an expansive office in the centre of the city, linking it with other trade centres of the Cyrannus Galaxy and the First Gigaquadrant.

“It was one of the most difficult fights of my life defending Venetia from the Bisistar scum. By my honour, it will not suffer a fate like that again.”

“We have lost Puria, but we have this now. We will cherish it all the same.”

“Bombard it from orbit, I say! No good can come from letting these rebels go amok thinking they won!”

“We will never forgive the humiliation of defeat in this feeble rock. Your transgression against us will yet be paid in blood.” 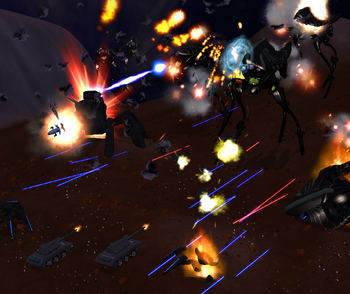 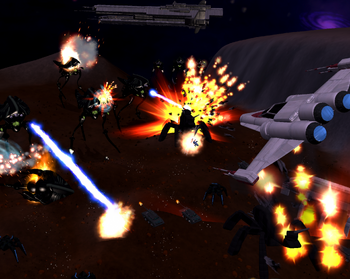 Retrieved from "https://spore.fandom.com/wiki/Planet:Venetia?oldid=749005"
Community content is available under CC-BY-SA unless otherwise noted.