“Vasuband is the bastion of order and civility in the Outer Rim. From it, the true rulers of Cyrannus will bestow upon the galaxy the true meaning of peace.”

Vasuband is a planet in the Outer Rim of the Cyrannus Galaxy. The homeworld of the powerful and advanced Basileus people, Vasuband serves as one of the few centres of civilisation in the relatively lawless expanses of the Outer Rim. Under the xenophobic government of the Basileus Imperium, Vasuband remained off-limits to other species, with the first alien visitors to the planet occurring after the formation of the Galactic Empire of Cyrannus.

A mountainous world of lush rainforests, teeming wildlife and towering cities built with beautiful care, Vasuband stands as one of the cultural and political capitals of the entire Cyrannus Galaxy, though the distrust many of its inhabitants feel towards off-worlders hampers the planet's successes on the galactic stage. Notable is the fact that throughout its long history as a world at the heart of a vast Imperium is the fact that Vasuband was attacked only once, by a small Neraida probe. The failure of this threat to cause damage to the planet has given its inhabitants a belief that any attack made against Vasuband is doomed to failure.

Despite this view, the planet fell to the Cyrannian Imperial State under the leadership of Imperator Tyermaillin. Thanks to Tyermaillin's popular support on Vasuband, the planet became the centre of the Imperial State in the ensuing New Cyrandia Wars. However, as the conflict drew on, the reconquest of Vasuband became the key objective by Imperial forces led by Grand Admiral Carandial, who ultimately led a large coalition of fleets from the Empire, the New Cyrannian Republic and Rambo Nation and conquered the planet for the Empire, and with it the Imperial State.

The homeworld of the Basileus, Vasuband became the centre of their space-faring civilisation, the Basileus Imperium when it developed space travel several hundred thousand years before the rise of the Galactic Empire of Cyrannus. A fiercely xenophobic civilisation, the Imperium's successive Imperators refused to allow aliens to step foot on Vasuband, with the exception of slaves gathered during the glorious campaigns of Basileus warriors. This tradition continued even into the days of the Confederacy of Allied Systems, with one of the key facts that kept the Basileus within the Confederacy was the deal between Imperator Tyranus and Chancellor Wullf Dasa that no alien would enter be able to land on their precious homeworld. Vasuband later became the capital of the New Basileus Empire when it was formed during the later periods of the Great Cyrannus War.

With the rise of the Galactic Empire of Cyrannus, the Basileus government was forced to relax its xenophobic laws in the face of membership in the far more cosmopolitan Galactic Empire. Within the next few years, Vasuband became a hub of trade and commerce in the Outer Rim, with aliens being welcomed by those who embraced the more liberal outlook of the Imperial government. During the first year of the Dark Times, Cogsangui conspirators hoping to oust Voro Acetenus from the leadership of the Cognatus Remnant discovered the Tra'ssahk hunter, Garnossk who agreed to kill Acetenus. While this event was beneath the notice of the planet's citizens, it served as testament to the changing times on Vasuband.

After the death of Imperator Tyranus for his role in the conspiracy against Tyrómairon, many Basileus citizens on Vasuband began to harbour doubts about the Empire.

Rela: "Soon we will march on Vasuband and with the Emperor's blessing bring Tyermaillin and his ilk to justice."
Carandial: "Indeed. My homeworld has been sullied by that rebel scum for far too long."
―Rela Loupál and Carandial during the New Cyrandia Wars.

This growing sense of unease aided the newly formed Cyrannian Imperial State under the leadership of the self-proclaimed Imperator Tyermaillin, who launched an invasion of the planet despite not firing any weapons. Though much of the intergalactic community condemned this violation of Imperial sovereignty, the vast majority of the citizens of Vasuband agreed with the new leadership, with Vasuband becoming the centre of the Imperial State.

Throughout the New Cyrandia Wars which followed, Vasuband remained as the capital and throneworld of Tyermaillin and his new Imperial State. With it, much of Basileus space ceded from the Empire and stood alongside the cradleworld in its fight against Imperial oppression. Though the conflict initially favoured the Imperial State, as it progressed, the Empire's vast array of weaponry began to pummel the State's defences to the breaking point. Enduring for two years, the State eventually faced the inevitability of an Imperial invasion.

When the Siege of Vasuband began, State commanders were shocked to find that the New Republic and Rambo Nation had joined with the Empire for the final push against the Imperial State. In both the skies above the planet and on the dusty plains below, the various factions fought for control of the galaxy. Ultimately however, the State was outmatched by the sheer volume of enemy resistance and began to collapse across the planet. With the arrest of Tyermaillin by Agent Caranye Valaeris and the surrender of the last remaining State forces, the planet once again fell firmly into the hands of the Empire.

With the fall of the Imperial State, the planet once again fell under the control of Grand Mandator Erissare who appointed her previously imprisoned associate Cenrond as a figurehead Imperator, who was charged with ensuring the loyalty of the Basileus to the Empire in the years to come. When the Second Great Cyrannus War erupted throughout the galaxy in 15 NE, the defence fleet of Vasuband was diminished in size and scope, owing to the planet's isolation from the New Republic. However, this left it vulnerable to invasion by an entirely different enemy.

Seeking revenge against the Emperor, the demonic lord Mar-Júun enacted his grand plan, and besieged his homeworld with a horde of demons poisoned by the Corruptus. Upon smashing through the Imperial defences, Mar-Júun forced Erissare to act as his slave, and declared the formation of a new power known as the Crimson Imperium. This Imperium was short lived, however, when the Aldárae Order, the Order of Cognalorilos and the New Republic launched a retaliatory strike against Mar-Júun. Simultaneously, Grand Admiral Carandial arrived in the system, and destroyed the Corruptus presence in orbit at the very instant that Mar-Júun was struck down by Kara Inviá. After the battle's conclusion, Erissare resumed his post as the sector's Grand Mandator.

As the homeworld and apex of Basileus civilisation, Vasuband houses a population of over twenty billion individuals, who dwell in the planet's massive cities both on the surface, under the ground and floating in the skies and seas. Most notable Basileus active in the galaxy call Vasuband home, with the planet holding a deep spiritual meaning for the Basileus people, who for the most part, have lived without religion. The planet is also home to several thousand different species of animal with a degree of diversity that rivals that of Capricaerón, Terra or Serindianiliae. 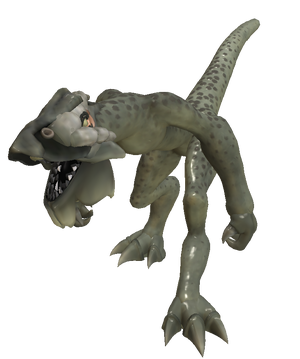 The Apotoma are a bipedal, non-sentient lizardian race native to Vasuband. One of the fastest predators on the planet, the Apotoma are feared by Basileus children, due to common stories passed down from parent to child about a lone youngling who ventured into the forest and was eaten alive by wild Apotoma. Despite this gruesome story, the Apotoma rarely attack Basileus with their main food being the eggs of other lifeforms, though in times of great hunger, an apotoma may instead turn on their own kind. Some Basileus keep Apotoma as pets, though it is illegal to do so in the more densely populated areas. 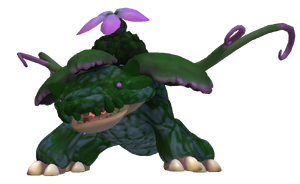 The Benavylsaur are a massive race of herbivorous beings that inhabit Vasuband. Believed to be related to the mystical Scions of the Quadrant Galaxies, the Benavylsaur are known for their temperamental attitude and their incredibly slow speed. With their primary defense being their massive size, the Benavylsaur manage quite well and it is not unknown to mistake them for a moving patch of trees due to the natural camouflage that they possess growing on their huge backs. 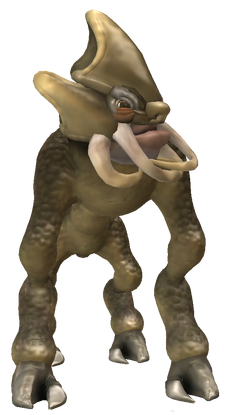 The Galoskera are a species of extremely territorial mammals native to Vasuband. They inhabit regions on the planet such as lush rainforests, where they are often found searching for subterranean creatures that live just below the surface of the planet. Galoskera eat just about anything they find and are primarily nocturnal unlike many other species of Vasubandian life, affording them a time of relative safety on the incredibly dangerous plains of Galoskera. Before the Basileus became advanced enough to ensure the continuity of the species, the Galoskera were almost hunted to extinction by the Apotoma, though today their numbers are healthy. 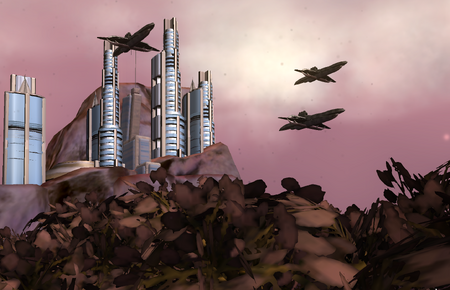 Basilban is the official capital of Vasuband and has historically been the centre of the Basileus civilisation, with the opulent palace at the peak of the Basil Mountain being the home of the Imperator. Home to over twenty three million people, almost exclusively Basileus, the city is considered by many to be a focal point of Basileus traditionalism, with most of the city's inhabitants being sceptical to the belief that in order to succeed, the Basileus need to work with other races. Nevertheless, the great vistas from the city as well as its gleaming spires serve as the example against which other settlements in the Outer Rim are measured.

Vasiliás is the largest city on Vasuband and is one of the most famous settlements in the entire Outer Rim, being considered by some who have visited it as the "Orbispira of the Rim". In contrast to Basilban, Vasiliás has seen an influx of non-Basileus residents in recent years with the city being as cosmopolitan as a Basileus city could ever hope to be. Stretching over an entire continent, Vasiliás is the pride and joy of many Basileus who have decided to embrace the greater galactic community, such as Guolivian. As such, in the past the city has been difficult to govern by the totalitarian government based in Basilban.

“My glorious homeworld has seen a new golden age thanks to the Empire.”

“Vasuband for the Basileus! No alien should step in our sacred cities.”

“Now that I govern Vasuband, I plan on turning it into an Erissare-themed theme park.”

“Nothing good comes from this planet.”

“A jewel of a planet that I would be eager to visit one hopeful day.”

“The Basileus may be to proud of themselves, but there is no denying that they have crafted a beautiful home for their brightest and most esteemed members”

“It would be very impolite of me to say that I enjoyed the devastation of Vasuband during the New Cyrandia Wars... but I enjoyed it, and I enjoyed it thoroughly.”

The Basileus, Lords of Vasuband

Retrieved from "https://spore.fandom.com/wiki/Planet:Vasuband?oldid=861040"
Community content is available under CC-BY-SA unless otherwise noted.