Independant
Thelliria is the homeworld of the Thellirian, a tropical planet with lots of small islands and large seas, filled with marine wildlife and fauna. Thelliria was once located in the Tigris Galaxy but ever since 07 AQF, after time relocation by the Typhon-Class the planet was relocated just before its destruction during the Tigris War in 04 BQF to 07 AQF, with her new home sector the Unclaimed Territories of Quadrant 82.

The planet was formed millions of years ago in the southern sectors of the Tigris Galaxy, homeworld to the Thellirian. The hot and tropical world gives a variety to wildlife, her oceans teaming with marine life and with volcanic islands, the land was rich to minerals and perfect for harvest. The earliest records of ancient civilization dates back to well over 35.000 BQF, to wich the later Thellirian would refer as the "guardians" and the Gods. The first and most ancient city constructed was Thelliria City around 10.005 BQF, with the ancient walls dating back to well over 25.000 BQF. From here, the Thellirian civilization began to thrive and grow in power and influance, spreading over the continents and islands.

Around 852 BQF the first space ship was launched from the surface. Since 21 BQF, upon the outbreak of the Tigris War the planet was visited for the first time in history by others than the Thellirian, and became one of the last free planets near the end of the war when victory was inevitable for the Congregation.

At 04 BQF the planet was destroyed when the Xhodocto destroyed the Tigris Galaxy. During the 8th month of 07 AQF, eleven years after its destruction the planet was relocated to the Quadrant Galaxies due to an anomaly created by the test trail of the Typhon-Class, a time ship in service of Rambo Nation. It was relocated in the Unclaimed Territories, away from the influance of super powers though the Thellirian were forced to defend their planet against among others the slavers of Sanderhal. At the second of january in 08 AQF, the planet fell under control of the Hutter Kingdom after a Hutter invasion force, led by Anjulius Gaitonius arrived at the planet and forced King Thelliam VI to surrender the planet.

In december 15 AQF, Rambo Nation made an unsuccesful attempt to liberate the planet by sending their new Caradhras-Class against the Kingdom. The Rambo were forced to withdraw when the Hutters began bombarding the planet. By the 6th of november 2818/20 AQF, after five years of occupation the new Hutter leader, Stekius Gaivel abandoned the conquest after meeting with High King Rambert Ramveral and Thelliria became a protected state of Rambo Nation. In February 2820 (22AQF), cadet Solana Cholia Stefani and lt. commander Antonio Tennant visited the planet as part of Solana's second internship at the Academy to study the architecture of the main city.

Thelliria City is the capital city and seat of King Thelliam VI, the most ancient site found at the entire planet, the outer wall and carved statues date back to well over 25.000 BQF. Access is only granted by three gates and harbours, with the main harbour located near the beach and allows multiple boats to dock. In the center of the city lies the palace, a massive structure ordained with obelisk statues, its inside is decorated by ancient tiles featuring somekind of labyrinth. The main hall features massive pillars and underneath the walking bridges a small lake lies shimmering, as well as the throne of Thelliria, ordained with two bird statues on either side.

Various appartments and small houses were constructed within the city walls, providing shelter and homes for the Thellirians, but also allows visitors to make use of the inn for a night over at Thelliria. Located between two small volcanoes lies the main hangar, where most of the Thellirian cruisers are stored and launched from.

Houses and appartments inside the walls

Volcona Isle is one of the many isles found at Thelliria. Most the Thellirian who were banished from the main cities as they wished to advance and drop their ancient and traditional views. Those banished began settling on these tropical islands. The islands and seas around provide the Thellirian of the Isle with all they need, though live is often in poverty. Volcano Isle was once owned and pursued by the notorious bounty hunter Thellma. After seeing the actions of his own government, he allowed those banished to settle at the islands, though with his own house and the new inn build, the rest live in shelters patched together of various materials, including metal and wood. Though in poverty, Thellma tries to bring more civilization to his people, but also rallies them to rally against the monarchy.

Most on the islands are unware of Thellma’s history as a bounty hunter, something the elaborated fashioned wearing outfit Thellma tries to keep a secret at all costs.

Thellirian fishing in a canoe near Volcano Isle 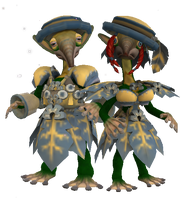 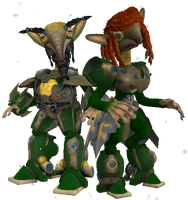 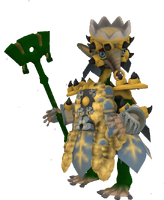 Most of the wildlife found at Thelliria are friendly and gentle, like the Thellirian themselves, most of them are Scions and mostly marine like. 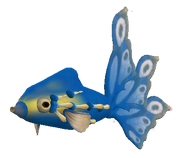 ButerFins are small water Scions found at Thelliria. These small yet fast and agile fish are often hunted upon for food, their back fins resemble the wings of butterflies, as such their name comes from it. Often described as gracious creatures, they are often kept as pets in aquariums.

They use water based attacks to defend themselves. 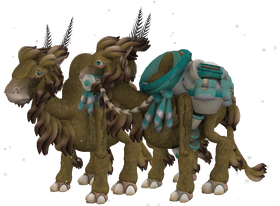 The Cammedarius are gentle and friendly Scions, the only mammal like found at Thelliria. Wandering the continents, they have a great knowledge of where to find fresh water, a trait that the Thellirian use when riding them, as they are perfect mounts and pack animals when tamed. The Cammedarius can walk for days without fresh water, are very endurable against heat though the longer without fresh water, the more their stench grows. For defense and attack, they are known to stomp their foes with their feet, or use sand based attacks. They are more likely to run away from a fight though. They are sometimes preyed upon by the Catacilli who allow a wave to carry them to the beach before grabbing an unaware Cammedarius.

The mysterious and powerful Catacilli are elemental Scions, a rare kind among them as they can use all kinds of elemental powers, though the Catacilli prefer to either use ice or water based attacks. Actually the only hostile creature found at the planet they prey upon the Butterfins and Thellirian alike, often known to sink their boats and canoes. They love jumping out of the water and playing with their prey.

No records have been made of one tamed.

Thoobster are lobster like Scions, with a soft and unique tast that is favored among the Thellirian and also known beyond the planet. The Thoobster are shy creatures by nature, using water based attacks and their claws to defend themselves and in search of food.

When trained, the Thoobster are fiercly loyal, though also have a tendecy to get over emotionally when losing a battle or by doing something wrong.