Democratic State of New Home, Nivenian Empire
Thadus 0037 (known to the former locals as New Home) is a colony founded by rouge Nivenian citizens in 231 BNE. It was effectively a superpower for thousands of astronomical units in the interstellar cometary cloud during its two and a half centuries of independence, and supports many self-sufficient fusion-powered habitats on the surface and in the rings, before becoming part of the Nivenian Empire. Its name represents its status of the 37th object detected by the Thadus infrared telescope.

Thadus 0037 is approximately 1.52 light-years from the Nivenia System, but only became a part of the Nivenian Empire in 24 NE during the Nivenian-Thadian War of Annexation, due to their not knowing of its existence until recently.

Thadus 0037 effectively controlled space for about three to four hundred astronomical units, and was very politically influential for nearly two thousand during its heyday. It is the only rouge planet within two light years of the Nivenia System.

Due to its formerly low temperature and small size, it was not observed by the Nivenian Empire until the middle of 21 NE. It was named after the Thadus infrared observatory, and it was the 37th object discovered. It is now a shared planet between the Nivenian Empire and the Null Empire, and was terraformed accordingly.

Thadus 0037 was controlled by the Democratic State of New Home (termed by the Nivenian Empire as the Thadus 0037 Faction), an egalitarian democratic regime which controlled Thadus 0037 and its immediate vicinity between Thadus 0037's founding in 231 BNE and the Nivenian Empire's invasion in 23 and 24 NE. This government was run by direct democracy, where petitions for new laws go to a popular vote immediately. Matters of state were determined by an elected official, but this official had no power except for enforcement of laws, and foreign affairs, and this official (Highest Official is the official title) could be impeached with a 70% popular vote.

The Nivenian Empire currently controls Thadus 0037, and has approximately two hundred billion soldiers and colonists on the surface. Thadus 0037 is expected to become a full Nivenian colony in the next few years, with a potential population of ten trillion plus.

All citizens of the Democratic State of New Home were displaced or killed during the Nivenian takeover, which partially entailed the use of fusion rockets to torch the surface of the planet.

As part of an agreement between the Nivenian and Null Empires to help strengthen trade routes, 20% of the surface of Thadus 0037 was given to the Null Empire for colonization. This territory entailed an artificial floating continent resembling four conjoined hexagons, and vast swaths of ocean near it.

Thadus 0037 has many lighted communities on the surface, usually completely isolated from both space and other lighted areas. These communities used to look more like parks than anything else, with as much life from Nivenia Prime as could be found (The nuclear war almost completely annihilated the ecosystem). These areas also exist in O'Neill cylinders in orbit of Thadus 0037. Much of the time, these are layered two or three layers high, with a ceiling designed to look like a sky.

When the Nivenian Empire took over in 24 NE, unnessesary power expenditures were cut, and most of these habitats were turned off until population increases to fill them.

These habitats are powered by fusion reactors that burn the hydrogen from the planet's icy outer layer, and have fuel to continue working for potentially billions of years.

These habitats are now inside massive cities on top of artificial floating continents on top of an ocean/ice layer hundreds of kilometers deep. It is worth noting that the cities have massive population densities, being several layers deep in most places. In addition, numerous habitats are not completely submerged, and not visible from orbit.

The planet has been terraformed to T3 by using a Megastructural Construction Corporation Ultimate Terraforming Lightbulb 1.0™ (a nuclear fusion-powered artificial sun) to heat and light the planet, and modifying the atmosphere to be thicker and less deadly to Nivenians, along with constructing artificial floating continents out of plastics for habitation. The terraforming schedule is shown below: 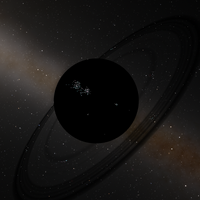 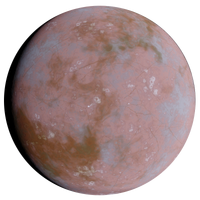 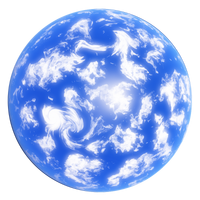 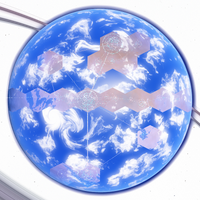