“A true beacon of hope in the Plazith Rim. May the fire that lights Terrae's brilliance never falter.”

Terrae is the third planet of the Taranis system in the Milky Way Galaxy, serving as the capital of the Allied Terran Republic, a major centre of Humanity and one of the primary hubs of both the Milky Way Cooperative and the Seven Starr Alliance. Founded by human unificationists fleeing from the chaos of human space during the Colonial Wars in the 22nd Century, Terrae quickly grew to become a key planet in the region, ultimately becoming the capital of the expansive Terran Republic when it was founded in 2754, becoming a key Gigaquadrantic capital in the process.

Most of the surface of Terrae consists of gleaming oceans, rolling hills, verdant forests and cities constructed in harmony with nature. The population of the planet itself stands at about ten billion, most of which within the capital city of Arcadia, the seat of the Grand Council and the cultural, political and economic heart of the Republic. In orbit above the planet however, the Milky Way Cooperative aided in the construction of vast megastructures such as giant rotating orbital habitats known as bishop rings which house most of the system's population.

Terrae is a key player in Gigaquadrantic politics, arts, culture and commerce for several reasons. Economically, the planet is located on the crossroads of several major trade routes including the Cyrannian-Delpha Route, which connects the planet to the vast trading hyperways of the Cyrandia Cluster and the vast wealth of the Universal Trading Union. Politically, the planet is considered a Gigaquadrantic centre of diplomacy akin to Mou'Cyran or the Rambo Capitol.

The origins of the colonisation of Terrae lie in the Human Colonial Wars. The chaos in human space resulted in the creation of an entirely new human faction, which claimed to act independently of what it referred to as "Old Earth" politics of national division and warfare, instead they supported the creation of a single unifying human civilisation to represent their interests on the galactic stage. However, the violence only increased resulting in the Unificationists fleeing to the distant Scutum–Centaurus Arm of the Milky Way, where they founded a new world; Terrae.

A new civilisation grew around the verdant planet, free from the restrictions of human-controlled space in the Orion Arm. Ultimately, these humans would create the Jovar, aid the Delpha Coalition of Planets against the Grox Empire and served as the focal point of the unification of large portions of the human species under a single banner during the cataclysmic War of Ages; the Allied Terran Republic.

Capital of the Republic[]

After the War of Ages, Terrae became the capital of the Terran Republic, a new civilisation formed from the merger of Old Earth nations such as the European Star Republic and more alien ones such as the Uplifted Cetacea. The planet became the seat of both the political Grand Council and the Council of Admirals and soon gained a reputation for being a centre of galactic diplomacy, with many wars being ended by agreements signed within Terrae's cities. Later, towards the dawning of a new century, the Milky Way Cooperative aided the Republic in constructing vast megastructures in the Taranis System which now house most of the system's population, leaving Terrae unspoiled.

When the Allied Terran Republic (in agreement with its associative members) established colonies in the Cyrandia Cluster in 2799, the native Empire and Republic agreed to link Terrae to the vast Delpha Trade Route, which links the central territories in Cyrannus to the central territories in Plazith. This, coupled with the Republic joining the Universal Trading Union greatly increased the prosperity of the planet.

However, when the Plazithian Seismomachy began in 2800, the citizens of Terrae began to fear that this age of plenty would find itself victim to the endless march of war.

Despite being a healthy T3 world about the same age as Earth, until the arrival of human unificationists in the 22nd Century, the planet was devoid of sentient life. In the centuries since, the planet has become a bustling world home to over ten billion people with the planet's infrastructure being interwoven with the beautiful environment of the planet. Native species to Terrae include the docile Spoffit, which has managed to adapt to the influx of Earth fauna brought by the colonists. The planet is home to many of the most important individuals in the Terran Republic as well as most foreign ambassadors representing their nation.

Tursiops: Councilor of the Uplifted Cetacea 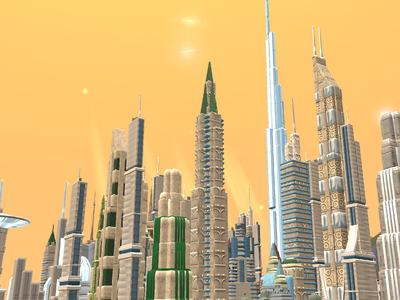 “The beautiful crown on the head of the Republic.”

Arcadia is the capital and largest city on Terrae. The city is home to most of the Republic's administrative offices, including the seat of both the Grand Council and the Council of Admirals. A thriving urban centre, Arcadia is home to industry, trade, commerce, scientific discovery and culture with one of its most prominent features being its famous skyline considered amongst the most impressive in the Milky Way Galaxy. The city is nestled neatly between the gleaming waters of the Atlas Lake and the picturesque mountains of Whitestone, where many foreign ambassadors stay when visiting the city. Much like other Terran colonies, Arcadia's architecture can be distinguished by the merger of old Earth-inspired designs first constructed when the city was founded and far newer towers inspired by alien cities such as Orbispira. 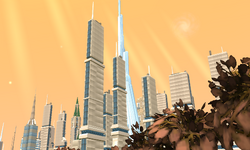 “It reminds me of my own homeworld in many respects. Perhaps someday I can visit it.”

“Earth may be my cradle world, but it is no longer my home. Terrae is.”

A Terran fleet above Terrae.