The desert planet known as Terra Desaria is a planet inhabited by Quadrantia Humanoids, it's hot temperatures and harsh climate make living only possible near the few rivers. Venturing into the deserts is one at your own risk. The native wildlife consists out of Scions, some gently and cute others fearsome and dangerous!

Terra Desaria is a desert planet, with barren areas of land where little precipitation occurs and consequently living conditions are hostile for plant and animal life alike. It seldom rains at the planet, with the only vegetation growing near water sources, most wildlife can be found there as well. With hot temperatures found at Terra Desaria, the blistering sun is dangerous for those not dressed or equipped for travelling through the barren areas of lands. The ground itself is filled with rocks as well, making it even harder to cross.

Not much is recorded of the early history of Terra Desaria, known records indicate that around 448 BQF the first humanoids settled themselves at the plane, shortly after the fall of the humanoid empire. Since then, the humanoids lived in peace and prosper, far away from dangers and galactic events. The humanoids, colonist from the former Humanoid Empire refused to go into space again and used their technology to build homes from the rocks and sand found at Terra Desaria. The people were led by their newfound lord, Lord Barask, a remnant of the once royal bloodline of the humanoids. The early years were hard for the humanoids, it took them years to get used to the blistering sun and heats common on Terra Desaria. However, the humans managed to adept with building their homes near natural water resources and their skin color had a darker tan then before, a result of spending a lot of time in the sun.

Due to the lack of space stations or space crafts, Terra Desaria escaped conflicts like the Second Galactic War. However some took advantage of the war and the Barask Dynasty came to an end, now with Lord Sinistaria, once Hand of the King acting as Regent, plans were made to go back into space and find and unify the other humanoid planets under one banner.

Humanoids of Terra Desaria are recognised by their blue hair and darker tan, the armored ones are the royal guards and law enforcers at Terra Desaria

All of the native wildlife of Terra Desaria are known as Scions, some are gentle and friendly, others are known to be aggressive and hostile.

Azmaril is a small blue colored water type scion living in the waters of Terra Desaria. This small Scion is friendly and gentle, often found cute by little girls they are a populair pet among the humanoids of Terra Desaria. Sadly their strokability turns out to be quite profitable for smugglers and Scion dealers.

The Azmaril use the end of their tails to float within the waters, while their larger ears give them excellent hearing abilities. They can use various water attacks for defense and offense. When captured, the Azmaril are often found to be very loyal and gentle to their trainers and summoners. 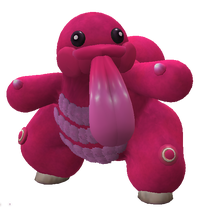 The Licky are a rare kind of Scion found at the desert world of Terra Desaria. These Scions use their appearance and large tongue to disable their opponents, though also use it to aid others in need. The Licky are most of the time in a very happy mood, though when angered shows itself to be a fierce battler.

When trained, the Licky are very gentle and often aid the trainer or summoner in need. They also show a tendacy to learn new things, like opening doors, using medical equipment etc. 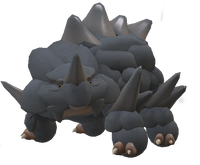 The Rhidor are large but slow moving rhino like Scions. With rocky scales they are well defended against threats, the blistering sun at Terra Desaria and allows them to keep their inner body cool while walking the deserts. The Rhidor are quick to anger, and when on a rampage they are difficult to stop. Though they can be found near waters to drink, they refuse to swim or enter the water due to their heavy mass, as they would sink and drown.

When trained, the Rhidor can be used as steed, are loyal to it's trainer or summoner though they keep their quick to anger attitude, they also turn out to be easily insulted. The Rhidor managed to wound up at Ramalivua, where they can be found within the Thirsty Desert, often used as mounts by the Green Orcs as well. 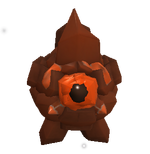 Rockma is a small stone Scion, though rather frail it is believed they can grow, but none no into what. The Rockma can use stone based attacks, like throwing rocks or use somekind of hardening to strengthen their physical defense.

They are kind and friendly, with sturdy stones as scales they can take quite some damage. Often energetic and most of the time in a good mood, they show themselves to be vulnrable to negative emotions to wich the Rockma often express in somesort of cyring/screech. 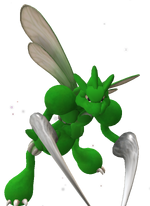 Slashers are a dangerous and hostile kind of Scions. Living among the trees found at the desert planet of Terra Desaria, most citizens know to avoid the Slasher Swarms. Living together in swarms, the Slasher are highly territorial, using their sharp claws to defend or claim new territories. The Slasher are incredible fast and agile as well, making it difficult to capture one.

The Starsea are a starfish like Scion, with the control of water elemental powers. The Starsea are living in the waters of Terra Desaria, often collected by others for display. Though not easy to capture, as the Starsea are fast, agile and can use powerful swift attacks in combination with water attacks.

When trainer, the Starsea turn out to be loyal companions.

The main city of Terra Desaria, simply known as the Main City or Desaria is the largest settlement found at Terra Desaria. Constructed near a large river, the water provides all the citizens need: a natural fresh water resource, ground able to grow vegtables on etc. The city has various narrow streets, larger buildings with docking ports for small crafts to land on and various bridges to cross the river streams.

At the hill, the royal palace was constructed, allowing the royalties and the guards to look over the river and the city below. Though crowded by humanoids, often traders from Sepherian and Gaskhanwill visit the local markets to sell their goods. Also the slavers of Sanderhal have their own stands to sell slaves. The Main City is the only official place for space craft to land with aid of communications.

Crowded and often found less attractive by others, the main city has various notable things associated with it.

The local markets of Terra Desaria are well known across the Unclaimed Territories as a place where you can buy and sell almost everything, from equipment to scions and slaves. The markets are found near the river, where the narrow land paths allow various stands to be placed where traders can either buy or sell their goods. The markets are often inspected by the guards, as the selling of fire-arms is forbidden, the rest is all allowed, including selling slaves.

As such the markets attracted neighbouring planets to sell their goods, including Sepherian Whisky, Gaskhan traders and slavers from Sanderhal trying to sell their slaves. Slaves are often bought to work in either the larger houses out of sight, or to work into the deserts in places where the citizens of the main city do not wish to have any knowledge of. Some slaves can also be put to work as escorts.

Terra Desaria houses a Scion Arena as well, where trainers and summoners can earn a skill token. Unlike Terra Prime, the Terra Desaria arena features a differant approach to earning the skill token. In the arena, where visitors will often come to watch, the challenger and defender will have to stand on their respective plateaus. Both can use one Scion to defend themselves, as the goal is to use the Scions to push of the other trainer from it's plateau. As such teamwork and defense is very improtant, the moment the other falls of his or her plateau the battle is over. Injuries to challenging trainers and summoners is quite common and the nearby Scion Health Center can provide medical assistance for the injured Scion and limited care for the trainer/summoner.