Taurophon is a planet located in the Heran Alpha subsystem notable for being one of the Twelve Worlds of Calithilaen. Located close to Capricaerón and Piconé, Taurophon is counted amongst the most prosperous worlds in the Four Systems – though is culturally quite distinct from its neighbours. Taurophons are considered to be very honorable and are rarely inclined to back away from a fight. This stubbornness in the face of danger has contributed to their reputation as the greatest warriors of the Twelve Worlds.

These traditional aspects of Taurophon culture stand in contrast to those of Capricaerónans – who instead espouse reason and liberalism, prompting many Taurophons to denounce Capricaerónans as materialistic fools. Nevertheless, the two worlds were generally allied to one another during the era of the Intercolonial Wars, though Capricaerón was known to intervene in internal Taurophon conflicts, working to ensure that dictators did not gain control over the often fractious world.

The famous admiral, Willelmus Cretacea came from a Taurophon family, despite being born and raised as a Capricaerónan. As a result Apollo, also has roots in the planet, a fact that many Taurophonns are eager to mention to others. During the Intergalactic War, Taurophon was a theatre of the final conflict against the Cognatus, who managed to devastate the world to the point where the subsequent recovery was considered to be amongst the most ardous of the Twelve Worlds. A decade later, during the Cyrannian Cold War, Taurophon increasingly became used by the New Republic government to host state visits with more militaristic empires interested in the martial culture of the planet.

Like the other Twelve Worlds, Taurophon was seeded with tribal Libertus from Capricaerón many thousands of years prior to the formation of the United Worlds of Calithilaen. The harsh and unforgiving conditions of Taurophon molded these unwitting colonists into a hardy and resilient people who developed strong notions of honour and tradition. The scarce resources of the planet ultimately bred conflict between the disparate population of Taurophons, cultivating the most martial culture in the Twelve Worlds. Nevertheless, this military prowess would not prevent the planet's fall to the Leonaen Empire in 2015 BNE.

Taurophon would languish under the imperial power of Leonaen for over two centuries and while the native Taurophons often attempted to resist, it would be Leonae's conflict with their old rival of Virgon which would provide an opportunity for planetary independence. Under the leadership of Auro Yetoeyn and her famous phrase, "Leonae's difficulty is our opportunity", vast swaths of Taurophon rose up in rebellion against the Leonaen administration. After a long and bloody struggle for control over the planet, Taurophon would be liberated – greatly damaging Leonae's imperial prestige.

Though Auro Yetoeyn attempted to introduce a meritocratic democracy as the official government of the entire planet, Taurophon descended into internal conflict which would impede on the planet's economic growth. Nevertheless, Yetoeyn's faction would ultimately emerge victorious largely due to the backing of the prosperous world of Capricaerón, beginning centuries of an uneasy alliance between the two worlds. This peaceful detente would end with the outbreak of the devastating Second Intercolonial War. Silas Homadama, regarded by wealthy worlds such as Capricaerón, Virgon and Scorpiae as a "playboy dictator", usurped control of Taurophon and declared war on the Unified Capricaerón Government. Homadama's government would be propped up by Taurophon's old imperial masters Leonae, as well as Cancerti and Gemónae. Ultimately however, the war would end in a Capricaerónan victory and would provide the impetus for the creation of the unified government of the Twelve Worlds – the United Worlds of Calithilaen.

Though the people of Taurophon generally distrusted the government of the United Republic of Cyrannus when it was formed in 53 BNE, many Taurophons rushed to defend it during the Intergalactic War against the First Cognatus Empire. During the titanic final battle of the conflict, Taurophon – as well as every other world in the Four Systems was attacked by the Cognatus. Though the battle for Taurophon was fierce, it ultimately concluded with the partial glassing of the planet by Cognatus destroyers in orbit. The Republic and its allies liberated the planet two days later, beginning the long process of reconstruction.

After the conflict ended, the Taurophons were aided in the reconstruction of their homeworld by the Republic government. Though the damage wrought on Taurophon was minimal compared with that of Scorpiae, it was substantial enough to last three standard years. During the Great Cyrannus War, the government of Taurophon had largely warmed to the Republic, particularly due to the President of the Republic – Apollo – having some Taurophon origins on his father's side of the family. Many Taurophons would join the Republic military to defend their way of life against what they saw as the Mortalitas-dominated Confederacy of Allied Systems.

When the Galactic Empire of Cyrannus rose from the ashes of the Republic at the close of the Great War, Taurophon quickly became a thorn in the side of the Imperial administration based on Capricaerón. Three separate Taurophon uprisings against Imperial forces were recorded by impartial observers, but were quickly hushed up by Imperial propagandists. When the New Cyrannian Republic gained control over the Four Systems, most Taurophons were apprehensive about yet another galactic government meddling in their affairs, prompting the New Republic administration under Senator Apollo to work to restore positive relations with the planet.

During the Fall of the Twelve Worlds, Taurophon was among the last planets to be attacked by Imperial forces, defended by Fleet Admiral Cretacea's armada when it was forced to abandon Heran Delta during the fall of Scorpiae. Nevertheless, though fighting on the planet continued after the space battle concluded, the Taurophoni government begrudgingly agreed to the terms of the P'ax Cyrannica Concordat, thus accepting a place in Occupied Republic Space.

Taurophon Libertus are noticeably quite distinct from other Libertus, having been hardened by the harsh environment of their homeworld and the myriad of wars fought throughout Taurophon's long history. This resulted in the development of a strong martial culture which stands in stark parallel to the peace-loving natives of Capricaerón, a planet which many Taurophons consider to be their world's great rival. Though Taurophon is considered to be amongst the most prosperous worlds in the Four Systems, the history of its planetary government was one of corruption, with many dictators manipulating the fragile democratic system of the planet for their own gain. This ultimately ended with the death of Silas Homadama at the end of the Intercolonial Wars, an era of deep shame to many modern Taurophons.

Taurophons are considered to be a close-knit, loyal and stoic people who value strength, reason and honour. Much like the people of the planet, Taurophon's animal life were forced to evolve to adapt to the planet's harsh conditions. The vast supercontinent of Permithera dominates the globe, within which vast deserts sprawl from pole to pole. Only the most resilient lifeforms can exist in the sprawling heat of the Permitera desert, with most species being found along the more humid coastlines or in the arid fringes. 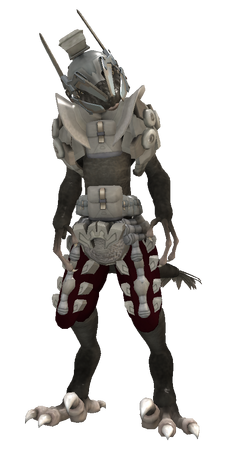 Silas Homadama
People's Union of Permitera
The most famous son of Taurophon, Silas Homadama is one of the most controversial figures in Libertus history. Derided by Capricaerón, Scorpiae and Virgon as Taurophon's "playboy dictator", Silas Homadama led the People's Union of Permitera during the Second Intercolonial War against what he perceived to be Capricaerónan imperialism in Heran Alpha. Various war crimes were attributed to Homadama during the conflict, though he went to great lengths to ensure that Taurophon emerged from the centuries of poverty which had plagued it. Killed at the conclusion of the conflict, Homadama is regarded as a hero by many modern Taurophons, while most other worlds consider him to be one of the worst despots in the history of the Twelve Worlds. 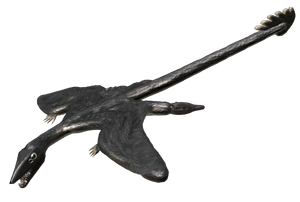 Novaphodon
Pterosaur
A long-tailed species of pterosaur, novaphodon are among the most common species on Taurophon. Native to the dusty badlands of the supercontinent, novaphodon possess jaws housing dozens of fragile, needle-like teeth, an evolutionary trait which allows them to hunt their favoured prey, fish and insects. With a wingspan of only thirty centimetres, novaphodon were demesticated by early Taurophons early in the planet's history, remaining popular pets in the modern age. 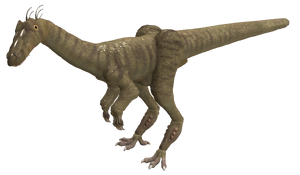 Rhodeusi
Therapod
A common pack hunter native to the inland deserts and scrub plains, rhodeusi are a slender species of therapod representing a far more primitive family of saurian to the more advanced tyrannosaurids and maniraptorans. Nevertheless, rhodeusi are an effective oppurtunisitc species which prefer to prey on the abundant small lizard species which can be found throughout the planet. 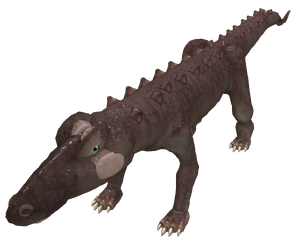 Tyroposuchus
Rauisuchid reptileThe largest and most dangerous carnivore on Taurophon, tyroposuchus are fearsome seven metre long rauisuchids closely related to crocodilians. The undisputed apex predator in the regions it inhabits, tyroposuchus hunt down rhodeusi, large herbivores and even other tyroposuchus. In terms of locomotion, tyroposuchus tend to be quadrupedal though can rear up on their hind limbs and become bipedal when chasing fast prey.

The largest metropolis on Taurophon, Tauronsopolis is regarded by the world's native population to be the original location where the gods planted them upon their beloved world. Now, a bustling city and the capital of the planet, Taurophon is quite distinct from most of the other planetary capitals of the Twelve Worlds, in that the central district has barely changed in the last millennium. This is largely due to the deeply embedded conservative elements which remain powerful in the city. Nevertheless, in recent centuries the city has expanded beyond the old walls into the surrounding hills and plains, reaching a population of over 7.5 million. During his time as Senator of the Twelve Worlds in the Galactic Senate of the New Republic, Apollo traced his ancestors to a family of merchants based out of the city as part of Republic News Network's "Reunions in the Stars" reality holodomain program.

“My paternal ancestors hailed from Taurophon, you know. A group of merchants based out of the capital city, who struggled to earn a living during the darkest days of our people. But they persevered and prospered. I consider myself a child of both worlds.” 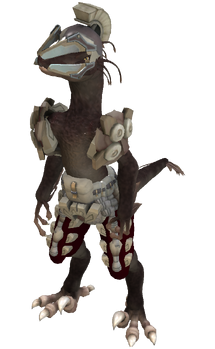 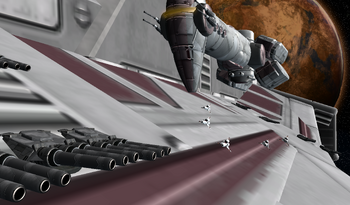 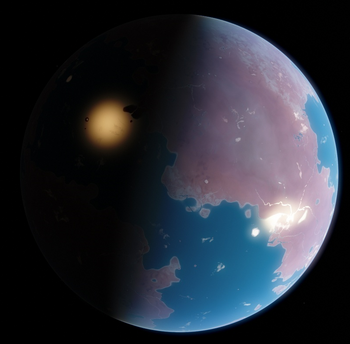 Taurophon, bathed in the warmth of Heran Alpha and Heran Beta.

Retrieved from "https://spore.fandom.com/wiki/Planet:Taurophon?oldid=783892"
Community content is available under CC-BY-SA unless otherwise noted.