4th planet from the sun

Northern Sector of the Unclaimed Territories

Sanderhal is the home planet to various humanoid species and the saurien Saurdoshans, located in the Unclaimed Territories of Quadrant 82. Sanderhal is a muddy and rainy planet with the planet's surface covered by a diverse flora, from trees to large mushroom like plants. Due to the large amount of rain, the planet is very muddy, a dangerous place to those who are not familair with such a terrain. The wet climate provides the flora the perfect oppertunity to grow, and some plains of mud are as deep as the few oceans at Sanderhal- considering them to be former meteor impacts the amount of rain filled the craters with mud and water over time. Electric storms are also often found at the planet, preventing crafts from landing or taking off the planet.

Not much is known of Sanderhal's history, as the many civil wars destroyed most of the ancient libraries. The planet stayed out of the Quarantic Conflicts and the humanoids managed to become the dominent species at Sanderhal over time (circa 150 BQF). Starting trade relations with the native Saurdoshans, the planet florished under her own rights and rule. The native Sandarians are often captured by the Saurdoshans for food, while the humanoids enjoy them as pets. Sadly, over the course of history the green skinned humanoids gained the ruling positions over Sanderhal and as of 01 NE they are the supreme rulers over Sanderhal, with Chancellor Xidan as their supreme ruler. Under the Green skinned rule the humanoids managed to launch their own space vessels, though small the grey/red colored cruisers can provide powerful laser blasts and are quite agile for their small size. The smaller grey vessels are their cargo freighters, transporting goods and commerce (including slaves etc) and were often sold to other individuals within the Quadrants. The yellow vessels are the ships of the Saurdoshans, equipped with weapons they are even a danger for the humanoid their cruisers but luckily the two are allied.

Since 0 BQF the Saurdoshans and humanoids began trading in commerce and goods, though the Saurdoshans also capture animals to fight in arena's for amusement, slaves for their own pleasure or to be sold elsewhere. Where the humanoids dissaprove this, they do not act against it as their ruler, Xidan provides funds for the Saurdoshans to continue their hunting and abducting.

Rise of a Slave Imperium[]

During the 4th month of 02 NE Sanderhal allied the New Rambo Resistance in hopes of avoiding an invasion by Rambo Nation or the Empire. They pledged their support in fighting those two superpowers whenever they dared to enter the unclaimed territories. Sadly their first joined operation above Kreeta resulted in failiure as Mortikran destroyed the Resistance base their and forced the Sanderhals to withdraw back to Sanderhal. Afterwards, the people of Sanderhal continued their daily matters, though become more bold as they began making a name as their own slave imperium and began raiding convoys as well.

During the 11th month of 06 AQF the crew of the Falcon caused some trouble at Sanderhal, including at an arena fight and became wanted by the slaver of Sanderhal, with a lot of credits to bring them to Sanderhal alive!

The planet Sanderhal houses various species, mostly humanoids who evolved at the planet next to the native Saurdoshan and Sandarians.

Blue skinned are humanoids of Sanderhal, loved by many and an attractive sight. Their head tails are often found attractive and are sensative as well. The blue skinned are kind and gentle, but stand low on the hierarchy at Sanderhal and are often sold for slavery or kept in slavery themselves for various functions in households, dancing or escorts.

The Blue skinned are experts in mechanics and are able to repair most of the machines they encounter. As such they are the main labour force of Sanderhal, working as slaves in the Sanderhal Shipyards, fabrics and all mines. 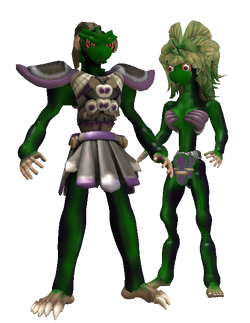 Green skinned humanoids are humanoid reptillians and supreme rulers of Sanderhal. The green skinned approve and cooperate with the Saurdoshans in slavery and abduction, and they do not hesistate to even sell their fellow blue skinned humanoids to slavers. As such they are feared and respected. With natural pheremons they can force their own will upon others.

The Green Skinned are ruthless and make the main decisions for Sanderhal, they have a great dislike and disrespect for both the Blue Skinned and the Sandarians, who they both view as lower life forms and not worthy of living at the same society level at Sanderhal. The Green skinned, due to their high position at Sanderhal control the navy, and as such have dominance over Sanderhal. 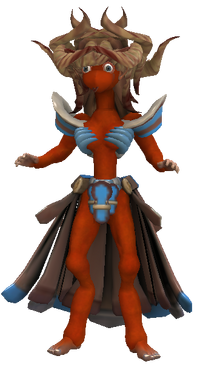 Orange skinned are humanoids of Sanderhal. Their orange skin reflects their hot temperant and are well known for their exotic likes and hot tempers! They have quite some influance in the humanoid matters though stand lower than the Green skinned, but above the Blue Skinned.

The Orange skinned are a rare kind of humanoids found at Sanderhal, often found in religion levels of their society. Not much is known about them else as they mostly are hidden among the White Citadel, and are low in numbers. 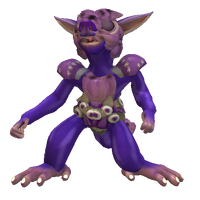 Sandarians are the monkey natives of the planet Sanderhal, though small they are a bold and a proud race. They live in small wooden farms, where they harvest for fruit to survive in the swamps of Sanderhal. They keep as far as possible away from Saurdoshans and humanoids whom they dislike as they are kept as pets or slaves for both races.

The Sanderians as such became a hunted race and some tribes began living as nomads, attacking all who they encounter in fear of being hunted down and captured. The Saurdoshans like to hunt down the Sandarian as preys, and often eat them for food. 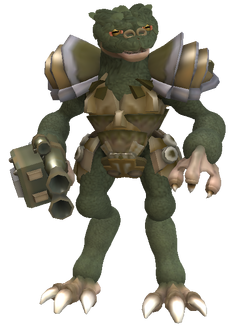 Saurdoshan are natives of Sanderhal and are relatives of the Cyrannus Tra'ssahk, though the Saurdoshan are larger and more fierce- yet they lack the agility their smaller cousins have. The Saurdoshans easily measure form 2.2 meters to 3.2 meters in height. They talk in slithering tongue and have their arena located near their village where they can held tournaments to fight against species and wildlife from all around the Quadrants.

They became experts in hunting down prey, whether for slaves or food their ships are a feared sight. Rumors have it, their own ships posses enought fire power to keep a Rambo ship at bay. 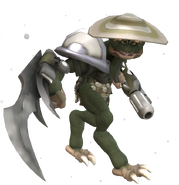 Pidarrow is a small bird like Scion, easily trained and a loyal friend Pidarrow is a perfect scout and companion. With an average height of 1.1 meters, the Pidarrow are one of the more smaller Scions, though still posses impressive wind-type powers, capable of creating strong winds to the point of small tornado's.

They are easily trained and kept as scions, though people are required to travel to the slaver planet known as Sanderhal to obtain one, making the Pidarrow not commonly seen among summoners or scion trainers. 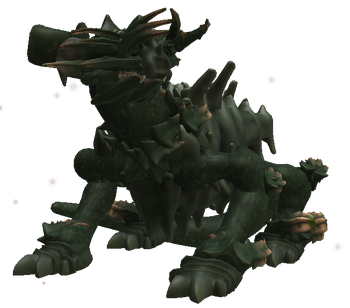 The Sanderhal Dragons are large dragon-like creatures, wingless, large and with a bad attitude these creatures lurk in the swamps of Sanderhal, waiting for their unlucky prey. The Sanderhal dragons are wingless, and instead have large pointy scales on their backs and belly, protecting their vital organs against other lurkers in the swamps and against weapons. Though not able to breath fire, the Sanderhal Dragons can breath a poisonous gas from their mouth, comparable to acid. The Sanderhal Dragons, few in numers are often tried to be hunted down by the Saudoshan to prove their worth, though few ever managed to actually bring down one of these mighty creatures. The dragons can be found deep in the swamps, far away from the cities of the people of Sanderhal. The creatures have an average length of over 8 meters, with an average height of 4 meters when fully grown.

The humanoids live in the White Capital, a large white city, once housing a temple dedicated to knights and large living towers and bunkers. The White Citadel is the only place as the planet where the sun is shining due to a secret wheather control device located deep in the former temple. As such the White Citadel acts as the capital where the sun shines her wonderous light at the white stones.

The Saurdoshans live in metal bunkers, keeping themselves safe from the constant rain and thunderstorms raging the planet. The Saurdoshan stronghold features landing plattforms for their ships as well, and nearby the stronghold lies the massive arena, where the Saurdoshans keept tournaments for sports and fun.

The Sandarian farms are small villages, with houses and barns, a water tower and nearby fields to harvest fruit, their main food supply. In recent days the farms and villages become more rare near the borders of the White Citadel and the Saurdoshan Stronghold, many have been plundered or destroyed and it's villagers enslaved.

Deep inside the swamps, where Saurdoshan and Humanoids do not venture, various farms are still found, though are often the target of the native wild life.

“The place to be for arena fights and fun!”