Rambo Nation
Sainte-Église is a planet located within the Quadrant Galaxies and is the ancestral home world of the Amiaeria. The planet is lush and green, harbors a variety of life and fauna and is often described as peaceful. However its history featured conflicts as well. The local Amiaeria take great care of their planet and the Scions living on the planet.

Together with planets like Terra Prime and Terra Desaria, it houses a large diversity of Scions.

As the home world of the Amiaeria, Sainte-Église has a rich history of wealth, plenty, events and conflicts. Various cities were once ruled by monarch and kings that often disputed over territories, borders and land.

Among the greatest and most promising on the planet is Avignon, a fortress city located near the coast and well protect by natural barriers. Known for its wealth, wisdom and reference to the mythical Qo-Oh this city was often seen as a neutral place to meet.

Within the city the mythical and legendary Scion Qo-Oh would visit the local Amiaeria, give those gifted with a pure heart its blessings. People from around the globe travelled towards Avignon for a chance to visit the temple and perhaps get a glimpse from a Qo-Oh. Sadly, like with many things jealously proved to be the undoing of this special relation. After a terrible attack at Avignon and a partial burning and collapse of the temple, the Qo-Oh fled the city and took the sky, never seen by anyone since then. Scientist claim this event occurred around 480 BQF. Saddened by the loss of one of their most referred Scions, the people around the globe stirred upon and disposed their kings and monarchs and managed to unify the planet under a single government, the Republic of Église.

Sadly the Qo-Oh never returned even though the temple was repaired to its original appearance. Even since the Amiaeria began to thrive together, gaining technological advances, building new cities and eventually managed to go to space. For years the planet remained a mystery though opened its doors to outsiders when the Amiaeria signed the Treaty of Fornaeria in 02 AQF and became members of Rambo Nation.

The castle of Avignon is an ancient place found at Sainte-Église and often seen as a spiritual and sacred place due to its historical connection to the mythical Qo-Oh. The most notable feature of the place is its massive castle, constructed on a hill near water the structure overlooks both bays, the walled city nearby and was once the seat of one of the Amiaeria Kings of Old. Now a days the castle is more of a tourist attraction and the wealth of the kings are displayed inside.

The inside of the temple features a landing platform for the Qo-Oh, various statues, flames that give the warmth inside the open temple and a small waterfall and pool;- known as the sacrad waters of Qo-Oh. The temple is guarded by the Celestial Guard, a female only guard of Amiaeria. Clad in ceremonial armor and robes, armed with a spear they stand guard at all times. Often mocked as the virgin guard as well, as the woman have taken vows of poverty, chastity, and obedience for the duration of their carreer. They are free to leave the guard at any time and as such most of the guard are the young who wish to serve their people before settling down with a family. In recent times though these vows are seen as antiquated.

Another notable structure is the "Celestial Temple of Qo-Oh", in ancient time it was inside the temple that the Qo-Oh would visit those with a pure heart and give them its blessings before it vanished after Avignon was once besieged. The city is filled with pillars with ancient statues resembling Qo-Oh or Avlias, the two principal scions and guardians of Avignon.

The buildings inside are build in brown sturdy stones, giving it a medieval look with either green or red roofs. A nearby dock allows transport ships to dock, to bring either commerce and goods or tourists.

Celestial Temple of Qo-Oh inside

Château Église is a small fortress structure just build outside Avignon and was once the residence of the guests that visited the kings and queens of Avignon. After the fall of the kings the building was left without purpose and became a library for a while but was soon abandoned. Upon the arrival of Ramgasdruil the Rambo Serindia wizard, the house was given to the wizard and soon became the main institute where people learn about the Scions, their abilities and how to interact.

All under the tutelage of Ramgasdruil who loved to study the myths of Qo-Oh and Avlias, believing that they have a role to play in the survival of the Quadrants and Rambo Nation. He soon become known as a professor on Scions. Unknown to the public at large he lives on exile at Avignon, away from the Rambo authorities where he can conduct his studies and travels in private. 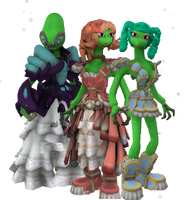 The individuals listed below either hail from the planet or still live on it. 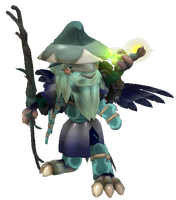 Avlias is a bird-like Scion with powerful psychic abilities. With its aerodynamic body and glass-like feathers this mythical being inspires many. Colored in bright red with jet-plane wings it soars through the sky and waters of Sainte-Église. It is able to become invisible as its feathers can enfold its body and refract lights. It also has the ability to change appearance.

A highly intelligent being, this mythical being is endangered and rare, sighting one is often seen as sign of luck. Often found near water the creatures are rather shy. It is one of the principal guardians and refered Scions of Avignon and is even featured in it once royal insigna.

The Crowven are an avian Scion with black feathers. With a yellow beak, three featherly tufts on its head give it a crooked appearance. With its red eyes, high pitch screech and often laughing sounds make this creature an annoyance and many dislike the Crowven. It is known to steal food, make a mess of garbage and sometimes harm other Scions when disturbed or bored. It often steals food or sparkly items like jewelry.

Many consider meeting a Crowven at night a bad omen. 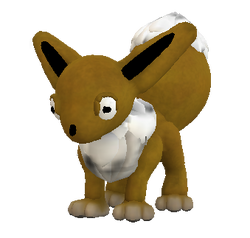 Eiveon is a mammalian, quadruped Scion with brown/white fur. It has short, slender legs that allows the creature to use its agility and speed. Its long pointed ears allow it to hear sounds over large distances. It can be found in the nature around the globe, often living near trees or woods where they search the grounds to acorns and berries.

It has a rather naive and shy personality and when tamed are very friendly though sometimes a bit posh. They are a favorable pet at Saine-Église and since the Treaty of Fornaeria also gain popularity within the Nation at whole. They are known to grow or evolve when at other planets or when meeting certain requirements. 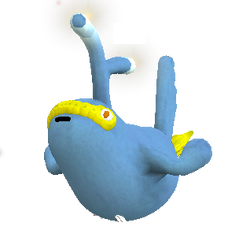 Eletarn is a medium sized, blue fish-like Scion with a pair of small blue fins. It has yellow markings on its front, often giving it an appearance of a "mask". The tip of the bottom of its tail is also colored yellow. Its dorsal fin features two yellow orbs, giving light underwater and the main source of its electric powers.

Though appearing slow it is actually quite agile and difficult to catch. They can be befriended though when giving wild Eletarns at regular times food. 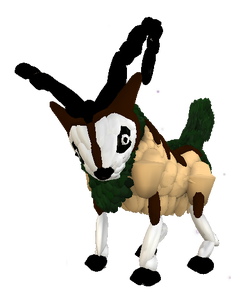 Goatling are quadruped, hoofed Scions resembling goats or mountain goats. Covered in brown fur and with somekind of grass/plant-like mane around their neck, that extends down their spine and ends in a short spine. Their eyes are surrounded by black markings. On their head, two large horns that extend from its head. They use their horns for defense and mating. Female Goatling have smaller horns.

They can reach high speeds and can carry heavy weights. Known to be found in forests, plains and mountains they are one of the most common and tamed Scions at Sainte-Église. They are often used for riding and pack animals. Male leaders often lock horn in mating seasons and it is advised not to stand in between. 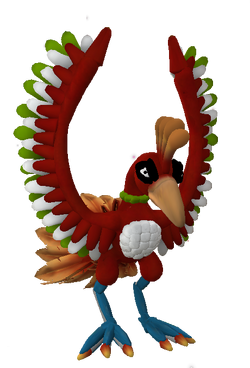 Lenght: Estimated between 2.5 and 3.8 meters

The Qo-Oh is a mysterious, mythical and legendary Scion found at Sainte-Église. One of the principal guardians and Scions of the city of Avignon, many statues can be found of this noble creature within the city. The Celestial Temple was build in honor of the creature and was a place where those believed to be pure of heart could recieve the blessings of this creature. It vanished after Avignon came under attack in the past and has not been seen since.

Qo-Oh, as ancient scrolls indicate is an avian Scion that resembles a phoenix. With gold/red/white and green feathers this mythical being brings awe in those that see it. It has a yellow crest on it head. Its wings are prismatic, leaving a rainbow trail behind it. It is believed the creature can resurrect the dead and could use devastating fire attack that turn entire cities to ashes. Its flames of wrath so hot, it could even melt stone.

Upon its blessing, it is believed that the ones with pure of heart live a life of happiness and plenty. 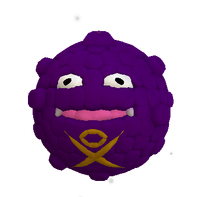 Smogash is a levitating spherical Scion filled with toxic gasses. It has vacant eyes and a wide mouth with two pointed teeth. Several crater-like protrusions mark its body, able to release either smoke or poison gasses. To create these gasses, Smogash mixes natural toxins within its body with garbage, effectively being a natural garbage cleaner and as such found within cities and villages. The gasses are known to cause sniffles, coughs, and teary eyes to those around it.

The Png files require both the Dark Injection and CambBen Color Mods.