Kingdom of the Netherlands

Rottum is a lone planet in the northern territories of the Kingdom of the Netherlands in the Finduila Sector and is considered one of their military outpost, housing a single squadron of 12 space F16 starfighters.

Rottum is an ancient outpost of the Kingdom of the Netherlands and one of the first military installation raised upon their arrival in the Finduila Sector. For hundreds of years the base withstood the events of the Finduila Sector and often kept watch over the Zone de Libres. Upon the rise of the Legatus Finduilica, Rottum became the first area of the Kingdom to fall before the relentless might of the Legatus.

In february 21 AQF, the rebel half-elf Yvenne Thalyssaera stole the Legatus Finduilica Gozantia-class cruiser, LF-389 from lieutenant Timothy Winthazen and learned he and his crew were to supply this rather remote outpost after downloading the cruisers database. During their infiltration of the base, after some heavy fire fighting Yvenne and her crew managed to steal a sqaudron of F16 fighters. During their flight, they managed to disable a patrolling Arquitens-class Star Frigate which arrived in orbit to answer the call of help by the Legatus personnel at Rottum.

Rottum Base is military outpost originally deployed by the Kingdom of the Netherlands though later used by the Legatus Finduilica as well. The base is surrounded by the sea, its runways manmade and are used by the squadron of space F16's starfighters. The base houses at least 12 F16's and can harbour one to two small-medium sized cruisers or freighters (LC-class or Gozanti-class) that supply the base. The base is used as a listening and stanging area as well. The features a single traffic control tower, a large barrack complex for those inhabiting the base on rotation and a beach for leisure time.

The base is protected by two massive cannons, similair ones found on the Imperial Autokrator-classes. 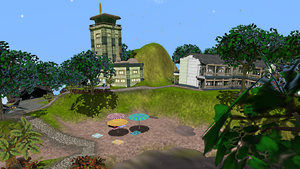 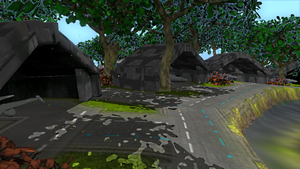 Retrieved from "https://spore.fandom.com/wiki/Planet:Rottum?oldid=845837"
Community content is available under CC-BY-SA unless otherwise noted.