Rambo Loyalist:
Ramrevera was a former Rambo Nation settlement and colony that fell during the First Galactic War in 2794 (04 BQF) after its surface was annihilated by the dreaded Imperial Alliance. Suffering a climatic change from a green world into a frozen and desolate world the remaining citizens were forced to migrate and abandoned the planet.

By 2813 (15 AQF) it became the main base of operation for the resistance movement known as Santa Company.

Ramrevera was settled by Rambo Nation during their Golden Age and grew out to an important trade port. It grew famous for its tolerance of alien cultures and counted a large number of non-Ramboidae as its inhabitants. A great holiday site, famous for its mountain roads and perfect hiking locations across lakes and mountains.

The colony was invaded by the Imperial Alliance during the First Galactic War in 2794 (04 BQF) and its cities were reduced to ash. The fallout of the devastating caused massive climate changes and the green world changed into a frozen and desolate world. Afterwards the planet was abandoned though at times bold hikers loved to visit the frozen planet though at the outbreak of the Second Galactic War in 2798 (0 BQF) the planet was totally abandoned.

By 2813 (15 AQF), General Doohan and his supporters settled at the planet and raised Santa Base. The main base of operations for the resistance movemetn known as Santa Company- part of the larger Rambo Loyalist movement.

Ramrevera Prime was the capital city of Ramvrevera, once a pearl amongst Rambo Nation at whole and home to various Ramboidae and non-Ramboidae citizens. Known for its peaceful streets, markets and canals the city was a popular tourist destination.

It featured various light houses and watchtowers, squares for markets and various landing docks and a popular zoo featuring various species from within the Ramboidae Realm. The city was destroyed by an orbital bombardment by the Imperial Alliance and left in ruins. After the drastic climate changes the remains and ruins became covered by snow and by 2820 few buildings and remnants remain visible on the surface of Ramrevera Prime.

The ruins, and in particulary one of the ruined watchtowers is used by the Santa Company as a scouting post and resting and training area for the Santa forces.

Santa Base is the main base of operations of the Loyalist Santa Company and is constructed inside a partially mountain/iceberg. Three large tunnels were carved into the mountain and were sealed by massive metal doors. The entrances are used for its various fighters and transport ships to enter the main cavern. The main cavern features various shelters, a large workshop for the walkers and various starfigher maintance docks.

Near the shelters lies the command center and the mess hall. The messhall is decorated with various plants to provide a more warmer feeling and comfort. Inside the cavern it is far less cold than outside though it often still freezes inside. The surrounding of the base is protected by either natural mountains and various man-made trenches and turrets emplacements. 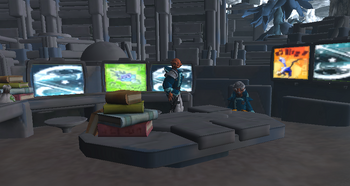 Command Center inside the cavern 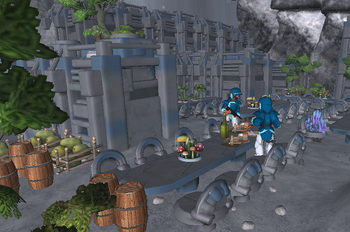 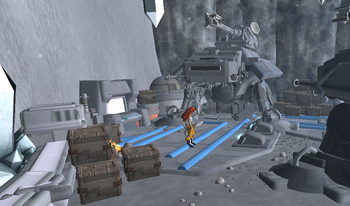 After the drastic climate change much of the native wildlife went extinct, though various managed to thrive including one that was introduced after being brought to the planet by smuggling itself onboard freigters. The current wildlife inhabitants of Ramrevera are all considered Scions. 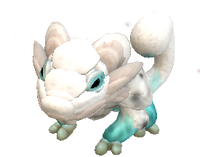 These small mouse scions are found on numerous planets within the Cyrandia Cluster. The ones at Ramrevera arrived by smuggling themselves onboard freighters and invading the natural ecosystem on Ramrevera. After the climate change they survived by adepting. Their fur became white and as Scions they changed element and are able to use small ice attacks for protection.

They are (in)famous for their habit of stealing Loyalist food supplied at night and sometimes nagging at conduits and wires. 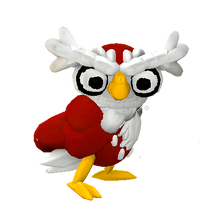 The SantaOwl are native owl-like scions to Ramrevera and once prized for smuggling. Surviving the climate change the SantaOwls found new prey in the form of Rattatoi and foxes. They use ice powers to ensnare their prey.

Loved for their colored feathers and rather gentle attitude, the creature became featured on the sigil for Santa Company. The Company is named afer the bird as well. 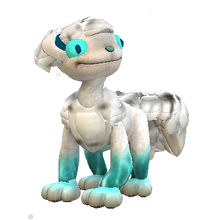 The Verfoxes are native to Ramrevera and were originally found on the polar regions. After the climate change the foxes spread across the globe, finding new prey in the form of Rattatoi and sleeping SantaOwls.

They are able to summon small ice attacks and blizzard and are often a nice sight to behold as they often play with others of their kind and are not shy. When trapped or feeling threatened they can be snappy though.

The Png files require the Dark Injection mod and the CamBenColorPack