House Ramcelsior
Ramgotheria is a small settlement within the southern regions of the Ramboidae Realm. Often seen as a peaceful and wealthy place it houses Rambo Serindia who wish to escape their busy lives on other major planets. Many wealthy Serindia have a holiday house on the planet as well. It falls under the authority of House Ramcelsior.

Shorlty after the fall of the colony, the Sylit Republic came to the aid of the Serindia and Rambo Nation and retook the planet. By the end of the war, the planet would suffer another invasion by the Imperial Alliance and leveled most of the settlements. The Imperial hold over the planet was eventually lifed by the Core Federation. After the war the settlements were rebuild by the native Serindia and prospered for a while.

The Ramgotheria Settlement is the only location left on Ramgotheria after the devastating battle raged on the planet during the Second Galactic War in 2798. After the war, the native Serindia gradually rebuild their settlement and created a place of harmony and peace. Introduced Herbisciosa creatures from the wild- and farm stock on the planet.

Featuring common buildings found within the colonial sectors of the Ramboidae, the settlement lies near a river and provides a warm and gentle feeling for those visiting it. The only structure that survived the war is the bridge spanning the valley and is often seen as the main memorial reminding the citizens of the war and those that fell. 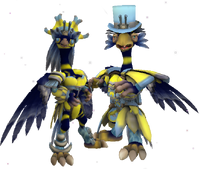 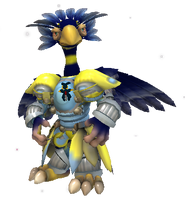 The Herbiciosa are herbivors and cow/goat like creatures. They are often found in herds and tamed by the Ramboidae to serve as farm animals. They produce very good milk, which is considered a delicate among the Ramboidae. Although these creatures have horns, they only use them in defense (example as Veloraptorae attack them). Mostly these creatures can be considered as slow and kind creatures who mean no harm. That is the reason why they were used a pets and are easily herded.

Though native creatures to the Rambo Capital, Herbiciosa were introduced on Ramgotheria and are thriving ever since.