Second planet from the moon

falls under the Rambo Goverment

Ramghatulk is the homeplanet of the Rambo Zombilia, also known as the Nauglazcm. The planet is most known as it houses the most secure, fortified and secretive prison within the Quadrant Galaxies, the Ramghatulkiaga Orbital Prison. The lave planet is considered the ideal place for a highly secured prison, build above a sea of lava, it's providing a natural protection against escape.

Ramghatulk is a pretty unknown colony, though is vital for the order and securing of the most dangerous criminals within Rambo Nation.

Not much is recorded of the history of Ramghatulk and the Orbital Prison. When the Rambo Nation met with the other Ramdoidae that lived in the Quadrants between 446 BQF - 442 BQF the Nauglazcm joined the Nation and became a valauble member of them. When Rambo Nation became involved in the Trogg Wars in 442 BQF it became clear the Nation needed a prison, where prisoners could be housed and interrogated far from the Rambo colonies. The Nauglazcm volunteered and constructed the orbital prison.

Over the history of Rambo Nation many war criminals were send to Ramghatulkiaga Orbital Prison, for many it became the last place they would ever visit. Over history only a handful managed to escape the prison, attributing to the fact that the prison is quite secret and not many known of her excistence. During the Second Galactic War (0 BQF) the Imperial Alliance became aware of the location of the prison as well, but never attempted to free the ones asociated with the Alliance.

Sadly in 05 AQF/01 NE, during the second month of the Great Cyrannus War many prisoners were freed by the Confederacy of Allied Systems. Afterwards a few of prisoners were re-captured, and the attack became classified, ensuring the secrecy of the orbital prison for the public.

Afterwards the planet was reinforced with anti-space cannons and a large fleet to protect it from further attacks.

Rambo Zombilia are the native sentient species of the planet 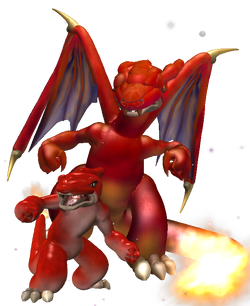 Charzargon are medium sized lizard/dragon-like creatures found at the lava planet Ramghatulk, together with the native Rambo Zombilia. The Charzargon can be found at Ramghatulk at desolate regions and mountain sides, far away from the villages of the Zombilia.

These vicious and aggressive dragons are fire-breathers and a danger to woods, swamps and forests. Their fire-breath is feared by many and is able to burn the flesh of your bones. Though when not disturbed, the Charzargon rarely venture outside their domain and remain out of sight. Their stage II has powerful wings and claws, their dangerous fire-breath and cunning nature the Charzargon are a dangerous scion and not easily tamed nor do they give their grattitude and blessing easy. When the flame on their tail fails, the Charzargon dies. They have a orange/yellow skin and can variey in size between 1.8 and 5.2 meters. Though aggressive, they are actually noble creatures and when a person earns it's respect and grattitude, the creature can choose to become a scion- able to be summoned by the one it deemed worthy.

The Charzargon are often challenged by Saurdoshan who wish to use the creatures within their arena fights, defeating a Charzargon indicated you are ready to face a Sanderhal Dragon at your own. The stage II of the Charzargon is rather rare and many believe them to be extinct. 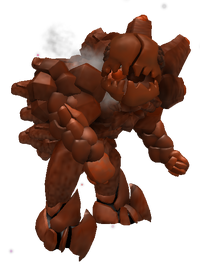 Quadrantia Magma Eaters are mysterious and large creatures found at lava planets all over the Cluster, how they travel from one planet to another remains a mystery though they seem to be natives of Ramghatulk.

The Magma Eaters are giants, though looking fierce they are rather kind and humble in nature. As their name suggests, they mostly eat lava and somehow get all the vital supplements from it to survive. Their movement and appearance at planets indicates the various herds of Magma Eaters are actually moving from one planet to another, and reappearing months later again. Magma Eaters in herds are not dangerous, lone Magma Eaters on the other hand can be dangerous and agressive. Though normally Magma Eaters avoid populated areas. Some Magma Eaters can become over 28 meters in height.

The new prison location of Rambo Nation, a former lave mining facility is was rebuild as a back-up prison if Section 001 should have been exposed or destroyed. After Captain Tul escaped, the prisoners were transported to facility 082 and now houses the criminals. Heavily guarded it lies above a lava sea and lies always directly into the sun, and almost never sees the dark of the night, due to it's most nothern position.

Facility 082 is overseen by various Nauglazcm guards and lies close to their main village. The prison houses various prisoners, who are given life sentences and are never allowed to escape they are placed there, waiting for the day they die of sickness, old age or insanity when jumping down into the lava sea. For years, the Rambo Nation Goverment has been discussing the possibility to open the prison for other empires as well, to dump their most notorious criminals at Ramghatulk under the watchfull eyes of Rambo Nation. However, Rambo Command doesn't feel much for it and campaigned against it. Most prisoners inside have to remain there for the rest of their lives, however other important criminals who only have a term to remain in the prison can also be found inside.

The small village located near Facility 082 houses the main population of the Zombilia. While many of the Zombilia live within the small nest towers, only with wings you can enter their houses and their height provides shelter against possible lava floods. The main building of the village is known as the Courthouse, the office of the Senator who acts as the Warden as well. Further more the Courthouse also houses the only saloon at the entire planet.

Nearby lies a small port for shuttles to dock and for passengers to enter or leave the planet. Within the Courthouse, the prisoners recieve a last medical check and they can drink and eat something they want before being send for eternity into the prison facility. As Courthouse and Warden the building houses all the files and rapport. The Court was once build in ancient Founder style, but due to the climate on Ramghatulk the building became pitch black.

The Ramghatulkiage Orbital Prison, or Section 001 is a prison which floats above the lava. It is inhabited by the most dangerous and famous captives of Rambo Nation. Only shuttles are allowed to land on the prison docking port.

The prison is black and hot because of the lava, it is also dangerous because a misstep could mean a long plunge towards the lava.

It should be noted, that no one has ever escaped the prison. The oldest prisoner is former Rambo Admiral Ramcelsior, who was responsible for the GN3Dura Experiment and the developing of the Planet Busters.

It was the longest excisting prison of Rambo Nation, but due to Captain Tul's escape and the notification of the prison's location to the Imperial Alliance, Rambo Command was forced to abandon the Orbital Prison and transported all the prisoners to another location on the planet. It was later destroyed by the Confederacy during their attack on the planet. 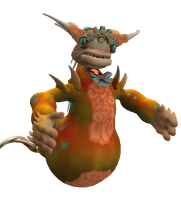 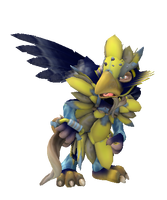 The following prisoners have once been housed at the prison:

“The vile, ugly and most dangerous criminals will serve their terms here! Some for eternity!”

“A most disturbing place!”