Rametru Nui is one of the most important and magnificant colonies of Rambo Nation, located in the vital and wealthy sector known as the Mid Colonial Sector. Due to it's unique scenery and it's cities constructed on floating rocks marks the planet as one of the Great 5 planets of Rambo Nation and a populair tourist attraction. It is also seen as the secondary capital of Rambo Nation. The planet is also of strategic importance, located on the Nui Passage Trade Route it connects Koerband with Matakoro and acts as one of the first planets in defense against a possible Quadrantia Grox attack, as the borders of those dreaded creatures are located north of Rametru Nui.

The ruler of Rametru Nui has since it's construction has been House Ramdorian and protected by it's private fleet and the Rametru Nui Guard.

The Great and levitating Cities of Rametru Nui are over 430 years old, the colony was build by efforts of the Serindia, Pantorilisea and the Rambo Founder in 430 BQF after members of the noble House Ramdorian found the planet a suitable place to colonise it in name of Rambo Nation. The building took a long time, and when it was seen they needed a levitating City, they were eventually aided by the Aviadactyl, marking a speed in it's construction. After 85 years of constructipn, the cities were finally finished around 345 BQF, following a ceremonial event House Ramdorian officially pledged fealty to the Royal Dynasty and the Head of House Ramdorian was given the title of Lord Warden of the Mid Colonial Sector, protector of all planets within it's sector, with priviliges of maintaining it's own guard and private fleet. The unique location and construction at the floating rocks attracted the Creckel, it was here where the Creckel and Rambo signed their peace treaty and trade continued ever since from that day.

For years the city lived in prosper and peace and was even spared from harm during the First Galactic War against the Imperial Alliance. Soon after the war, a serious problem surfaced for the inhabitants and it's current Warden, Andaurl Ramdorian as the leavitating parts of the city began needing extensive and expensive maintance to keep them floating and intact. There are some part, far away from the main city that are known to have chrashed into the seas below after the rocks grew instable.

During the Second Galactic War the colony came under attack by a joined fleet of Imperial and Ruin Sector Alliance ships, with aid of the Sylit Republic the colony defended itself. During the battle Sylit SE-Bumblebee flew within yards of an Imperial Light Cruiser, and then dropped SCWM-2000 VTRONs (Sylit war robots) onto the cruiser. They got into the ship through an air duct, and took the Imperials inside by surprise. The VTRONs took control of the cruiser and before the other ships in the Imperial fleet had realized what had happened, they were destroyed by what they thought was their teammate. The Fleet of Retribution entered the atmosphere of Rametru Nui and saved the Rambo there. As such the Sylit's prevented Rametru Nui her fall and the Sylits were greatly honored at Rametru Nui. It later became an important free zone and the Sylit's became a respected sight on the colony.

After the Second Galactic War Rametru Nui once again became a flourishing place and enjoyed a moment of economic grow. During the Intergalactic War the Acientia Captain Anciaddwia and Empress Ramashe met with eachother near orbit of the colony. During the following three silver years the colony grew even more wealthier and prettier than is already was. When the Quadrantia Disorder and the Great Cyrannus War broke out, the colony became reinforced by a fleet because the nearest mid colony Karzhamarhi-Nui had fallen into hands of the Confederacy of Allied Systems.

In the seventh month of the year 04 AQF the colony came under attack by a large Confederate fleet. Fleet Captain Trabl'krgte of the USS Apocalyptor lead the defense but realised that the battle was already lost. Heavy outnumbered he ordered his fleet to open a hole in the fleet, and it allowed various civilian ships to escape the battle. With covering fire of the USS Potemkin and the USS Aquila the remaining Rambo ships withdraw to Rambo Prime. After the space battle was won in favor of the Confederacy, the Confederacy launched their invasion fleet to the surface and with minimal resistance from a Rambo Trooper Regiment stationed there, the colony fell within three hours into Confederate hands. During the battle Senator Creckbo was captured and scheduled for interrogation.

Roughly a month after the fall of Rametru-Nui Rambo Nation experienced some surprising events, though unknown to the public Empress Ramashe defeated Dhazhrak in personal combat, as he had acted like her for almost two years. Though the citizens of Rametru-Nui tried to live their daily life, it wasn't easy as food supplies of the colony were all taken by the Confederacy and the people were almost starving.

When the citizens reached news of an assasination attempt at the Girdo Ambassador at the Rambo Capital they feared Rametru Nui wouldn't be freed for a while, just as Kharzamahri Nui was in Confederate hands for multiply months. After Ramashe met with URC President Apollo salvation arrived for Rametru Nui in the last week of the 8th month of the year 04 AQF as the Second Battle of Rametru Nui had begun. A combined fleet of URC and Rambo Ships, better known as a task force of the Fleet of Retribution arrived at Rametru Nui under command of the famous Vice-Admiral Ramcard. With aid of the cloacking USS Attentive, Fleet Captain Trabl'krgte of the USS Apocalyptor, two other Rambo ships and three URC Star Destroyers the Confederate forces were driven from Rametru Nui after two hours of battle. Celebrations broke out at the colony and the captains of the URC and Rambo were hailed as heroes.

After the battle, as Ramcard and the captains left for other duties Fleet Captain Trabl'krgte remained at Rametru Nui to design a battle plan to retake Karzhamahri Nui. Meanwhile the citizens began repairing the damage done to the colony and houses and began distributing the arriving food and medical supplies.

In 01 NE Rametru-Nui became part of the protectrate of the Empire, upon the signing of the Concordat.

Rametru Nui City is actually the only city at the planet, spread out over various floating rocks and connected by bridges.

Due to precious nature and bridges, larget ships are prohibited from entering the city, instead they have to dock at floating docking ports and taking an airbus to one of the floating rocks. Smaller crafts and shuttles are allowed to use docking ports within the city. The city itself houses Old Founder style buildings found at the Rambo Capital as well, those also features the round houses unique to Rametru Nui, these houses are often build at the lower parts of the floating rocks, allowing only creatures with flying or glide abilities to enter them.

As such the colony houses only Rambo Serindia nui, as most other Rambo Nation species besides the Ramboidae do not posses wings to fly with. The cities feature harmony and peace, with a lot of libraries and appartments.

The halls of the capital building are filled with tepastries and paintings, statues and books.

Rametru Nui houses only Rambo Serindia, with it's subspecies the Serindia Nui, a proud and honorable kind of Serindia they are smart, intelligent, cunning and fierce to protect their homeworld. The planet houses also a small number of Quadrantia humanoids, though they are often living in the appartment buildings. 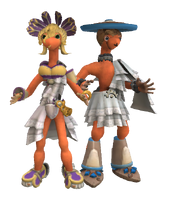 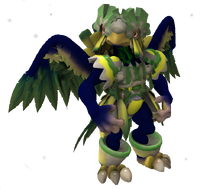 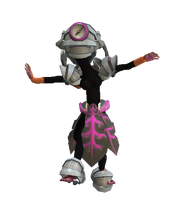 Rametru Nui has it's own private fleet as well as it's own guard, sworn fealty to the rulers of Rametru Nui, House Ramdorian. 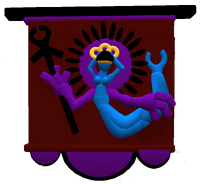 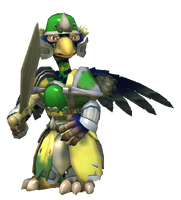 The local wildlife of Rametru Nui consists of mysterious creatures known as Scions. 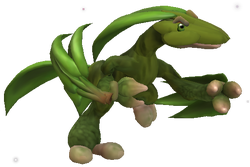 The Grotreedo are small lizard like scions, living in the trees of the floating rocks found at Rametru Nui. Swift, agile and very curious the citizens of Rametru Nui either like them or find them an annoyance as they like to trash garbage trunks in search for food. They can call upon grass based attacks and swift close combat skills.

When trained, the Grotreedo prove to be very loyal, often showing a refusal to admit defeat. 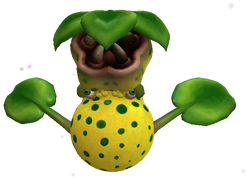 The Victreeion are a grass/posion like creature found at Rametru Nui. These vicious and agressive plant like scions can cause significant skin malfunctions due to it's poisonous attacks it uses for self defense. They live among the trees and floating rocks, using their two lower leaves to travel from one branch to another, as the branches connect the floating islands.

When trained, the Victreeion can show great affection, often wanting to hug it's trainer or summoner.

Most of the Png files requrie the Dark Injection mod

The Capitol Building of Rametru Nui in the distance