Rambo Nation
Ramaakota is a small planet located in the Badlands Sector of Rambo Nation. Remote and rather isolated, the hot and dry planet is home to the native Kzyterkz. For decades, Ramaakota remained independent and a protectorate of the Rambo until is suffered an invasion by the Imperial Alliance during the Second Galactic War in 0 BQF. The Kzyterkz later signed the Treaty of Fornaeria and the planet became a member of Rambo Nation. Ever since, Ramaakota acted as a space port for those ships patrolling the Badlands Sector and the Ramsoria Run, her saloon is a famous and well known shore leave for those serving in the remote southern areas of Quadrant 82, including those serving onboard Lianna-station.

The native Kzyterkz evolved into the dominant species of the planet around 3500 BQF, ever since they slowly expanded and grew into a sophisticated society. For years, the Kzyterkz followed their ancient traditions, worked hard to survive the hot and dry planet, until at least 150 BQF, when they made first contact with Rambo Nation. Though the Kzyterkz only could travel in orbital rotation and to another planet in their sector, the Rambo decided to befriend the wolf-like Kzyterkz after they requested a protectorate-status, as the Kzyterkz feared the Rambo's stories of war with the Quadrantia Heer Stekeveel.

Since then, the Rambo and Kzyterkz remained friends, Ramaakota became a populair and well known stop for ships travelling the Ramsoria Run, in return the Kzyterkz visited other planets of Rambo Nation as well, boosting their economic and tourism sector.

Upon the outbreak of the Second Galactic War in 0 BQF, the dreaded and malicious Imperial Alliance waged war upon the Quadrant Galaxies and eventually invaded Ramaakota as well. The Rambo fleet in orbit unable to protect the planet was utterly demolished. The Lizardian plundered the planet of supplies, food and artifacts and destroyed many ancient statues and structures. During the war the planet was eventually liberated, but the damage had been done. Ever since, the Kzyterkz population numbers and cities are slowly recovering from the damage done.

In July of 08 AQF, during the events of the Torments of Arcaniox, the Ragashota elder visited Ramaakota with aid of the smuggler Dil'inne'Dry to ask Rambo Nation to aid his people in need. In march 2820 the planet was visited by fleet-captain Garan Andarch and Cadet Jenna Lenissa Rambo during the Academy Adventures.

Ramaakota Port is the main settlement found at Ramaakota, the sand colored buildings and towers are easily recognized and resemble those found on other desert planets like Gaskhan and Terra Desaria. The largest rotunda-like building is known to the Kzyterkz as the Temple of the Atlantica. Within, the remnants of their once rich spiritual legacy was stored until its plunder by the Imperial Alliance. Now a days, three of the ancient statues still remain inside the temple, honored and prayed to.

Due to her remote location and close proximy to the Ramsoria Run, Ramaakota became a populair shore leave for those serving in the southern sectors or at Lianna-station for its famous saloon. The saloon is currently owned by the Gaskhan Gaskuark, rumored to be an employee of Morglûkia, who has a nose for profit, shadowly dealings and intelligence for sale. The city is also a favored hiding spot of the bounty hunter Zevracence.

The Kzyterkz are the native species of Ramaakota, these wolf-like species have a reputation as aggressive, dominant and physical stronger than humanoids and Serindia. The male Kzyterkz use their claws and sharp teeth in battle, while the female members are more known to use their looks for seduction and excellent use of untraceable poisons. Both sexes have a fur that keeps them warm in the cold of night and protects them from sun burn at day. The Kzyterkz, by nature are very traditional, spiritual and rather stay on their planet instead of exploring the vast dangers of space, unless it should be for holidays. None the less, in more modern years the Kzyterkz stood more open in serving onboard star ships and working on other planets instead on their own. Their as whole are fiercely loyal to the Royal Dynasty and a pro-monarchy to the point they refuse to hear otherwise about it. Their are a race that slowly reproduces and as such are quite vulnerable when large numbers of their kin are killed, like in example during the Second Galactic War.

By the rest of the Rambo species, the Kzyterkz are treated with respect and some are even a bit wary of them. They also seem to be a popular "bad guy" in horror movies.

The Kzyterkz maintain their own guards and military forces at their planet, who are skilled in the use of katana's. There species is rarely found serving within the general navy though there are exceptions like the officer Mykera K'rell.

Though the majority of the people of Ramaakota are Kzyterkz, some other species are known to live on Ramaakota as well and are well integrated into their society.

The Wildlife of Ramaakota is well adopted to hot and dry climate at Ramaakota, it has both Scions, dinosaurians and mammals. 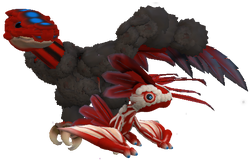 The Aaryxkota are large winged Scions native to the airs of Ramaakota. The smaller and infant Aarykota are often nicknamed Aaryxies, and are found to be annoying and pests, making a lot of noise and plundering garbage and leaving quite a mess. The fully grown or evolved Aaryxkota are more rare but are well respected, honored and feared as they are the main predators of Ramaakota. Many know to seek shelter when the shadow of their wings block the sun. Though normally leaving the Kzyterkz alone, they are known to prey on the swines, sauriens and sometimes on Kzyterkz as well. The Aaryxkota use strong wind and fire abilities, and seem to be quite stubborn when captured.

The Ankypiosaurus are large armored sauriens, though slow moving and often thought to be dim-witted, the Ankypiosaurus evolved over the centuries with a natural defense against the Aaryxkota. Bone like structure-plates covers their back, protecting them for hazards, the sun light and the claws of the Aaryxkota. Though it is their vulnerability as well, when toppled the Ankypiosaurus can get straight again without aid from others and their belly is not protected.

They often move in herds near water resources and use the club at the and of their tail for defense, offense and in the search of water and food. 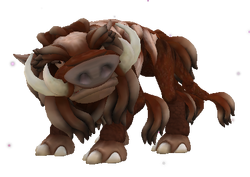 The small swine-like creatures are the mammal species on Ramaakota, the swines can either be herded on farms though live in the wilds as well. The swines are known to be aggressive when having children or in mating seasons, the horns on their snouts can cause fatal-injuries.

The swines are known and hunted for their delicacy, the Swine Ribracks!

The Png files might require the Dark Injection mod