North of the Inner Colonial Sector

At all times, three personnel

Proogency is since it's construction in 280 BQF an important and strategic location for Rambo Nation and it's closest facility near the borders of the dreader Quadrantia Grox. Formerly the facility was build at the surface until it's destruction and re-location to it's orbital astroid ring.

The facility monitors all Quadrantia Grox activities and the spacial anomalies surrounding the Quadrants, one of the more hidden installations the Proogency Facility is of vital importance to the Nation, as well as their first warning for a possible Quadrantia Grox arrival outside their borders.

Proogency is also known amongst the admirality of Rambo Command as the secretive starbase 20.

In 280 BQF, Rambo Nation under the rule of the Monarch Emperor Ramesgaroth continued it's exploration missions and eventually sought to discover the core of Quadrant 82, one of the five Quadrant Galaxies. Far from the core the Rambo exploration vessel made a disastrous first contact with the dreaded Quadrantia Grox, resulting in the assimilation of the vessel. Rambo Command build an emergency listening post facility at the surface to learn and study the Q-Grox, though after a few reports it became desirable to adopt a strategy of avoidance. Even since the facility remained operational by personnel of Rambo Command and continued it's monitoring of Q-Grox space. Eventually the facility was equipped with a large space dish, and gained a secondary role as listening post as well to monitor transmissions and if possible decipher them, the facility was placed under the Rambo Command Intelligence Deparment (RCID). The facility was upgraded with a shipyard as well, as a testbed for ships to combat the powerful Q-Grox spheres, for some within Rambo Command it became a wish to serve on the station, while others view it as the end of your social life and carreer.

During the Second Galactic War in 0 BQF, Proogency was taken by the Imperial Alliance in an effort to stop the Rambo's monitoring of Imperial transmissions. It remained in Imperial control until 03 AQF when Aur'Lodin actions brought the Imperial Aliance to an end. A mere year later, in 04 AQF the colony came under attack by the Grox Empire and the Confederacy of Allied Systems and was destroyed after an orbital bombartment. The destruction of the surface killed all native wildlife, changed it gravital rotation and power- turning it in a gas planet with an orbiting astroid belt as the remains of the once proud surface. Rambo Command re-installed a listening facility at one of the orbiting astroids and continued it role, though the facility was now also equipped with a small laboratorium for experiments. In 12th month of 06 AQF, commander Ramiron was send to be the new commander of the facility, together with lt. commander Tatsu Irana as his operation officer under command of vice-admiral Ramcard.

Their time however there was short, as during the second month of 07 AQF the USS Excelsior arrived at the facility and took the three crewmembers on their hunt for the Infernal, stolen by the bounty hunter Emtor and the dreaded Lizardian officer Lizrawn. The captain of the Exclesior, Chianwe Apanoida remained for three hours and the personnel of the facility were replaced by clone troopers, though it appeared it would only be a temporarily assignment. After the missions, the planet became the main base of operation for the USS Excelsior. 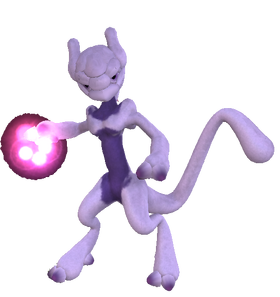 Qewtwo, also known as the Quadrantia Mewtwo is a mysterious creature created by Bianca Fiercehart at Proogency, this mystical and genetical creature came into excistance when Bianca gained visions of such a creature. Qewtwo has tremendous psychic powers and is angry at his creator for being unnatural and viewed as a mere experiment. More unique is his ability to mentally speak the common language. Due to his dangerous nature and powerful psychic attacks, it is constantly given anaesthesia to keep it dormant.