Pauvenris, one of the larger and original colonies of Rambo Nation during their early years and one of the first planets the Rambo settled one after reaching space. Ever since it colonization the planet was ruled by House Ramcelsior. Over the years, during the Golden Age the planet marked her importance by the massive cities constructed, a boost in population and economy. Though the cities were filled with sky scrapers, large natural parks remained throughout their cities, marking the planet as a populair holiday spot.

The Planet was mostly destroyed after a Xhodocto entity destroyed the native population and wiped out almost all life at the planet in 01 AQF. Abandoned for years, interesst in the planet returned around 08 AQF when Salt Mines were constructed in secret at the planet, housing a dark purpose.

Pauvenris, homeworld of the holy Rambo Goldianius grew out to be a peaceful planet where the native Goldianius lived in harmony with nature, erecting temples to honor the Atlantica. In 2350 (448 BQF), the Rambo Serindia, members of the newly formed Rambo Nation arrived at the planet during one of their exploration travels. As the planet was lush and green, the Rambo Government ordered Rambo Command and within the same year a small settlement was constructed. First contact between the Goldianius and Serindia soon followed and upon the signing of the Ramboidae Accords in 446 BQF, the Goldianius became members of Rambo Nation and the planet became incorperated in Rambo Nation, signaling it long time status as one of the Great 5 Planets and most important for Rambo Nation. Within years the planet population and wealth increased, the Serindia constructed sky scrapers and large parks to live in, marking the planet as a populair holiday spot and a wonder for Rambo Nation culture. Due to its importance, it recieved a space fleet and orbital cannons around 429 BQF, at the start of the Golden Age to protect the planet against future threats. Remarkable, the planet escaped all the wars since the formation of Rambo Nation and it was even spared during the First Galactic War when the Imperial Alliance wrecked havoc upon the Quadrant Galaxies.

In 2798 (0 BQF), facing invasion by the Imperials during the Second Galactic War, a timely intervention of the Rambo Fleet prevented an invasion and attack. Shortly after the ending of the war the planet suffered an attack by the Xhodocto entity of evil, Saem'Dkoa during the March of the Apocalypse in 2799 (01 AQG). The defenses were taken by complete surprise though had no chance against the malevolent entity who destroyed the metropolis and all life within as a warning to Rambo Nation that they never "defeated" the Xhodocto.

In the aftermath and fall-out of the attack, the once green and lush planet turned desolate and grey, where once the grand cities and metropolis of Pauvenris was located, a large crater remained. Upon Rambert Ramveral position as chief of staff in 2806 (08 AQF), he took a personal interesst at the abandoned planet and in secret began constructing a facility there: a slave labor camp for prisoners that are not of high importance and can be missed. Those of political interesst are send to Ramghatulk.

In 2810 (12 AQF) after Ser Rambert Ramveral usurped the throne he send Princess Ramanei Joy Feather into exile on Pauvenris. She lived together with her Elechu inside the small estate though was frozen into statis two years later in 14 AQF.

During the Precipice-storyline of the New Republic Civil War Pauvenris came under siege by a New Republic fleet backed up by many allies. The Rambo defense fleet engaged the allied fleet and a massive battle erupted. The Rambo wanted to defend Pauvenris while the allied forces made an attempt to extract Laoi Cretacea from capitivity. The battle turned into the favor of the allied forces when they managed to cripple one of the Paragavatus-Class super star destroyer that subsequently crashed on the surface. An extraction team managed to secure Laoi and escape with him in orbit just before Rambo reinforcements arrived.

Afterwards the remaining Paragavatus-class super star destroyers were stationed at Pauvenris and fleet-captain Rambam became the official Warden of Pauvenris. By 2820 March, amongst the prisoners included Marscalcus Kakharis, K'rell and Ramglover. By the end of March 2820 the young Sia was brought to the prison as well and recieved a welcoming whipping as an example for the others. In September 2820, admiral Apticyus ordered the fleets stationed at Ramsoria and Ramgotheria to fall back to Pauvenris as a large Imperial fleet was massing in an attempt to deal one final crushing blow to the Loyalists and their allies.

The Pauvenris Salt Mine is a classified and secret labor prison camp constructed by Rambert Ramveral during his tenure as Chief of Staff. As a test side to deal with the large amount of prisoners taken from the conflicts with the Hutter Kingdom, he smuggled some away to work in these mines. At first just a labor camp, the discovery of the large amounts of salt, Ser Ramveral used to place to gain additional profits while keeping the location secret from the authorities.

The work camp is a horrible place, its grey metal construction house the slave cell blocks for the inhabitants of the mines. On top of a nearby hill, overlooking the mine the Pauvenris Estate is located, build in the common found white stone constructions. Its walls protect and hide the estate from sight and many slaves would love to work up there as they believe it is a safer and nicer place.

Punishment is swift and harsh, dolled out by the overseers and whip masters as they see fit. Excessive cruelty, including beatings, rape, and death, is not an uncommon occurrence within the mines. In addition to the frequent whippings (with metal tipped whips), there is a solidary cell located outside, after whipping they are placed within it as an additional punishment, those that survive the harsh and cold night are set back to work afterwards.

Some who make minor mistakes are often send to spend the night outside, often falling victim to the elements or the aggressive Crepechu. 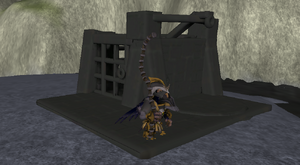 Guards keep their workers in line by using whips

The inhabitants can vary from species to species, depending on wich prisoners are send to the Salt Mines to work there. Overall, the life expectancy within the Salt Mines is 16 months. At all times, Ramveral Knights bearing the insigna of House Ramveral of Fornaeria are present within the mines, ensuring that the prisoners and slaves keep working and mining for the precious salt. 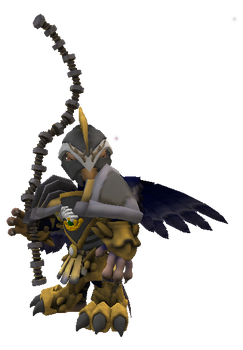 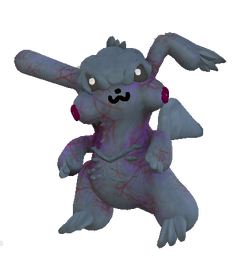 Crepechu are native mouse-like Scions to Pauvenris. Once creatures of kindness and beauty, after Saem'Dkoa destroyed Pauvenris the Crepechu were the only creatures that survived his onslaught. Mutated in the fall-out, these once cute Scions turned into creepy looking and hideous appearance that they have now. They can use dark electric powers that can kill anyone so foolish to wonder the desolate plains of Pauvenris.

The change and destrution made these Scions very agressive and crazy, attacking any at sight.

Retrieved from "https://spore.fandom.com/wiki/Planet:Pauvenris?oldid=840901"
Community content is available under CC-BY-SA unless otherwise noted.