Rambo Nation
Parjurba is the adopted home world of the Quadrantia Zazane that joined Rambo Nation as a member-species, its frozen climate and dangerous wildlife reflects the warrior aspects the Zazane hold dear. It is one of the least populated and visited planets within Rambo borders and few Zazane venture beyond the planet. Its climate is harsh, cold and its lakes frozen due to the freezing temperatures!

Around 225 BQF Parjurba was discovered by Rambo Nation explorers, soon an outpost was set up and remained just that. Until the outbreak of the Algernon War in 52 BQF, the outpost was attacked by the Quadrantia Algernon and the planet became abandoned for years. Around the Second Galactic War in 0 BQF, a large number of Zazane refugees and explorers arrived in the outskirts of the Quadrant Galaxies and soon settled down at the abandoned planet with the blessings of the Rambo Government.

The Q-Zazane Monastery is a complicated complex of various highly decorated buildings, compromising the domestic quarters and workplaces of the Q-Zazane warriors who work, live and train within the complex. Located in a natural valley, the monastery is protected by natural mountain barriers and if one does not know where to find it, is easily overlooking the spot. The entrance is decorated by stone dragon sculptures, somehow keeping the wraiths at distance. The monastery houses most of the Q-Zazane population within the Quadrants, though some are known to venture from Parjurba for various reasons.

The Monastery is decorated with ancient tapestries dating back from the time of the Zazane Empire. 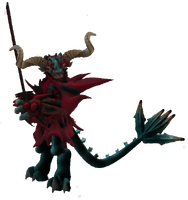 The Parjurba Wraiths are dark and lethal Scions, known for their sensibility and addiction to fear and despair of their victims. The three headed wraiths can summon dark energies to either defend themselves or to inflict severe injuries upon their prey or victims. When coming close their agony of drawing pure emotions from the soul leaves victims of a Wraith attack without emotions and some are rendered comatose.

The Q-Zazane combat these Wraiths to prove their worth as warriors and defeating a Wraith proves that the Q-Zazane in question mastered all of his emotions and is ready to embark on the path of the warrior!