Ozdudrahk is located at a distance of two weeks from Nexios in the western regions of the Cyrannus Galaxy. First planet in the north eastern sectors of the Space in Between, Ozdudrahk is the main space port and often the last port before entering the corridor leading to one of the few wormholes leading into the Quadrant Galaxies. Marked by one massive city between the mountains, plans life is harsh and most rely on trade and commerce to survive.

The history of Ozdudrahk is badly recorded, seemingly half-orcs of Ramalivua wounded up at the planet by using magical portals as early as 25.000 BQF. Ever since, the half-orcs survived in small settlements until larger groups set aside their differences and formed their main settlement and space port, Ozdudrahk.

With the rise of the Galactic Empire of Cyrannus in 05 AQF, the planet tries hard to escape Imperial attention to maintain their independece. With the outbreak of the Second Great Cyrannus War in 21 AQF, the government fears the Empire might take advantage of the Outer Rim sieges and conquer the planet as well. So far, Imperial representatives are welcome on the planet.

During the Valour of the Resistance-storyline Ozdudrahk harboured Rambo Loyalist forces that were tracked down by the Imperial elite Raptor Squadron. Mostly destroying the Loyalist forces on the planet Lady Astrosia invaded the planet and brought it under Imperial occupation.

The main city of Ozdudrahk is the massive capital city, easily recognised by the soft yellow spirals and towers that make their home in the massive and crowded city. Blue reflections of the windows give the city a feeling of tranquility and peace as trade vessels travel the skies to find suitable landing ports.

Two massive circulair openings that given the city their "eyes" as seen from above allow vessels and people to travel to the lower city where most of the less wealthy citizens live and often a safe haven from criminals, bounty hunters, smugglers and other less savory people. Most of the bars where you can travel unseen are located in the lower city as well, while in comparison the more luxurous establishments can be found in the upper city.

Outside the cities, spread over the planet small settlements or farms can be found in typical Ramalivua orc style building, mostly a single building and a tower like barn with windmill to provide the ones living outside the city with the means of food production and electricity. People from the country are often frowned upon in the city, though those that do not wish to be found often live in these settlements as well. 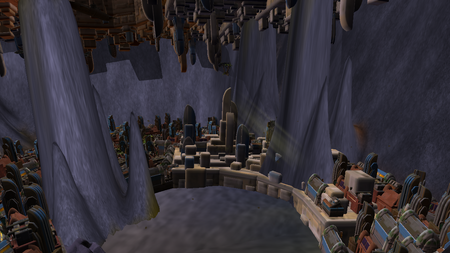 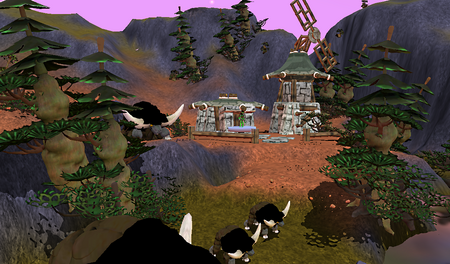 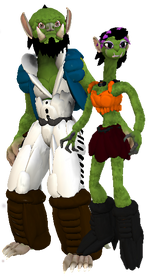 The main species that call Ozdudrahk their home are the half-orcs, descendents of the orcs found at Ramalivua in the Quadrant Galaxies. The Half-Orcs were banished and exiled into unknown magical portals in ancient times, a small number found their way at Ozdudrahk and over time became a large population of hard working people. The half-orcs of Ozdudrahk are the offsprings of Ramalivua orcs and Quadrantia Humanoids. Because of their mixed-breed nature, they were ignored and shunned upon at Ramalivua hence their exile.

The half-orcs of Ozdudrahk don't feel part of either humans or orcs and as such view themselves as an individual race with their own rights, hence their accomplishments on Ozdudrahk. They are physical stronger and quicker than humanoids though lack the raw strength and brutality of orcs.

The half-orcs of Ozdudrahk dress themselves in easy fitting cloathes and refuse to wear armor or pelts. Some of the half-orcs in the country cling to the old way of living but are often mocked for it when they visit the city. 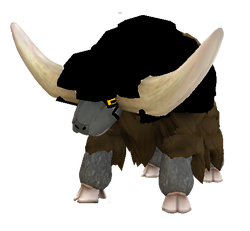 The Ozdouffalant is a large Scion buffolo normal type scion native to Ozdudrahk and often used as working, draught or pack animals by the native half-orcs. The Ozdouffalant are kind and gentle creatures, not easily provoked and love to walk the high plains and often graze grass the entire day for nuitritions.

The Png file requires the Dark Injection and the CamBenColor Pack

The Png file requires the Dark Injection and the CamBenColor Pack

Retrieved from "https://spore.fandom.com/wiki/Planet:Ozdudrahk?oldid=820472"
Community content is available under CC-BY-SA unless otherwise noted.