Confederacy of Free Planets
“Nosiso? Who'd want to go to that rock?”

Nosiso is a large desert planet located in the Outer Rim of the Cyrannus Galaxy, known for its dusty red sand and its extreme temperatures. It served as one of the capitals of the Confederacy of Allied Systems during the Great Cyrannus War and was home to huge factories, which created a large amount of the Confederacy's ground forces. However, after the Second Battle of Nosiso, Nosiso fell under the command of the United Republic of Cyrannus, which later was reformed into the Galactic Empire of Cyrannus. The native insectoid population was forced into slavery by the Imperial regime, though the planet was liberated in 03 NE by the Confederacy of Free Planets. Nearly two decades later, Nosiso was brutally attacked by the Imperial flagship Sovereign, which annihilated the Confederate fleet stationed in orbit and unleashed its cannons on the planet's surface. The resulting destruction eradicated the planet's population, and left Nosiso as a broken shell.

Nosiso has a thick dusty atmosphere, which make it difficult for creatures to live on the surface of the planet. However, the Nosisans evolved to deal with the hostile landscape on the planet, and evolved to adapt to the conditions.

The Nosisan are the insectoid natives of the planet of Nosiso, in the Outer Rim of the Cyrannus Galaxy. When the Confederacy of Allied Systems was formed, it lured the Nosisans to the newborn government creating a great alliance resulting in the the Nosisons became members of the CAS. However, within a few years the Great Cyrannus War erupted. However, despite Nosisan attempts to hide their planet from the United Republic of Cyrannus failed when the Republic launched a massive invasion of the planet. However, thanks to the arrival of the resurrected Zillum, the Confederacy was able to repel the invaders.

However, during the third year of the war, Nosiso once again came under attack by the Republic and despite the best attempts of the Confederacy, they failed to hold onto the planet thanks to the arrival of the Cognatus Remnant on the side of the Republic. As such, the planet fell under the Republic's jurisdiction, which later passed onto the Galactic Empire of Cyrannus when the war ended.

Soon after the war ended, a hive of Nosisans left their home planet for the first time in history, led by a new Nosisan Princess. These explorers eventually settled down on the world of Yudumarth in the Quadrant Galaxies. Under the control of this new Princess, the Nosisans on Yudumarth seek to conquer the planet. Meanwhile on Nosiso, after three years of living under the Empire's brutal regime, the Nosisans joined with the local resistance fighter Nak'kak'chish and the leader of the Confederacy of Free Planets, Cassynder, who eventually liberated the planet from the Empire. 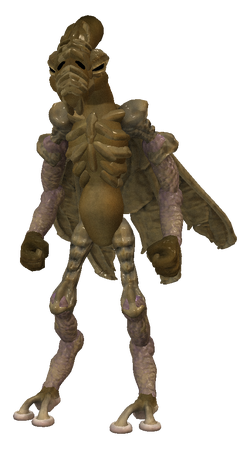 The Nosisan are the insectoid natives of the planet of Nosiso, in the Outer Rim of the Cyrannus Galaxy. Despite their frail look, they have a thick hide, and can shed their skin when they wish, however when they were introduced to the galactic community, they became known for their excellent ship building techniques, which lured the newborn Confederacy to the planet, a great alliance was formed that day, and the Nosisons became members of the CAS.

When the CAS fell, the Nosisan became common slaves for the newly created Empire, becoming involved in a great variety of construction projects across the galaxy. However, during the third year of the Dark Times, the Nosisans led by Nak'kak'chish and Taros Cassynder revolted against the Empire, ultimately liberating their planet.

“I have bad memories of this bug-infested desert. Needless to say, I don't plan on returning.” 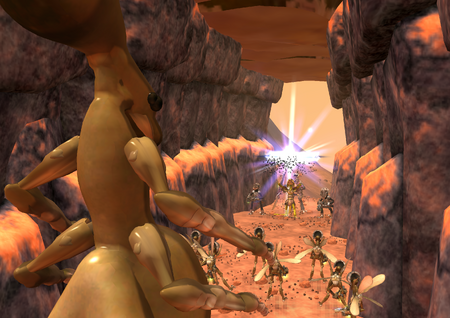