Starbase 30
Located at the Gorge

Noldágoral is a hot, dense and swamp planet located at the border of the Unclaimed Territories and the Neutrality Zone in the Quadrant Galaxies. Rambo settlers managed to inhabit the planet as early as 125 BQF, creating a small and peaceful community. By 19 AQF Rambo Command sieged the planet and absorbed and fortified it as starbase 30, one of the many fortifications along the infamous Gorge.

Surprisingly, to many unknown it also houses an ancient temple belonging to the Aldárae Order, led by headmaster Robert Lefler.

The history of Noldágorel is shrouded in mystery. Ancient records indicate the Yodian visited the planet during the height of their power though all traces of their presence have sunk benath the endless swamps.

As such, for countless decades the planet thrived without civilisations, nature and the wildlife had a free way. By 125 BQF, a group of settlers from Rambo Nation settles colonized the planet and build a small community. For the following years it remained out of massive conflicts like the Second Galactic War and was a rather unknown location. By 19 AQF, things changed as Rambo Command sieged the planet, build a military presence around the mysterious Vanguinar Shrine and designated it as starbase 30, one of the many fortifications along Rambert's Wall, better known as the infamous Gorge.

By 21 AQF, during the Second Great Cyrannus War the planet was visited during the Escalation stages by Inquisotr Akagêlth who attempted to besiege the Aldaraé Temple. However the timely intervention of Commodore Malegras prevented the arrest of headmaster Robert Lefler and resulted in the death of the Inquisitor, causing a diplomatic incident between the Rambo and the Empire.

The Aldárae Temple of Altum is an ancient temple tracing back to the original Aldárae Order and presumed to have been build by the Yodian, the last visible remnant of their presence on the planet. The temple is build on the slopes of a mountain, nearby lies a lake with a waterfall leading into a small pool before the water flows away into one of the rivers that eventually flow out in one of the swamps.

The waterfall and the small valley is known as the Valley of Wisdom, where native wildlife and Order students can medidate with the forces of nature and be at peace.

The temple has four large towers, holding sleeping quarters. In the center of the temple lies one big circular dome where the masters and the students enjoy lessons, have meetings or have social meetings or can study in silence. Within the main dome a hidden door lies to a secret entrace into the docking bay below, capable of housing at least two Order starfighters. The docking bay lies underneath the small lake near the temple and its underground passes are a well kept secret.

The headmaster since the temple has been rediscovered is Robert Lefler since 10 AQF. 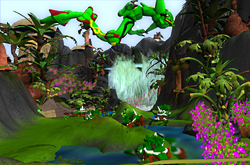 The Rambo village on Noldágorel was founded in 125 BQF when Rambo settlers settled down on Noldágorel and began a small farming community. Ever since, the village has been rather isolated and developed its own unique customs and building style. With grand houses build for luxary after a hard days work, the houses are popular amongst the people who wish to escape the busy and crowded areas on the larger main planets of Rambo Nation.

The village lies between various hills, shielding it mostly from the harsher temperatures on the planet as the valley provides natural shadows. However due to its location within the valley it can be quite dense as there is little wind in the valley. It is located near the military facility.

Some of the houses are populated by the nearby military forces stationed at the planet.

The Military facility is the actual starbase 30 and houses a battalion of clone troopers, various Rambo officers and a military vehicles and at least two Darkarg fighters.

The facility is build around and in the hills surrounding Mount Noldágorel, a unique stone mountain erupting from the swamps and hills. The facililty contains bunkers, sleeping quarters and a small landing dock up the hill. It contains a well kept secret, as the military facility was build for one purpose only, and not to be one of the fortifications along the Gorge. Its discovery was conviently during the Gorge Dispute, profounding reason to absorb the planet along the line of fortifications.

The mountain conceals the Shrine of Vanguinar, an old shrine was inhabited by Sinleri. As the elven race is quite a mystery, the Rambo study the place in secret and hope to discover the reasons why the unique Scion cannot leave its dome. 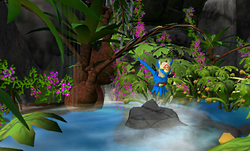 Noldágorel houses the unique and mysterious Scions as its native wildlife. 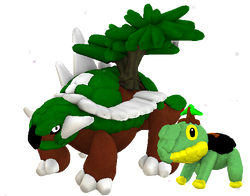 The Cordrata are bulky quadruped Scions resemblings tortoises. The infant is a small and cute looking creature, with a small seedling growing on its head. It loves being around moisty and water areas.

The adult Cordrate are bulky quadruped Scions with a large shell covering its back. With a single, oak-like tree and stony extensions resembling mountians peaks growing on its shell. They can grow in large sizes and can be very protective and agressive when protecting their young or after being startled. Moving herds are known as the walking forests of Noldágorel, as the herds create the illusion of "moving forests". 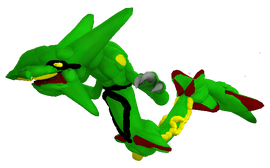 Mayquaza are large and legendary serpentine creatures native to the skies of Noldágoral and honored and respected for both their power and wisdom. It is green/yellow colored and has two limbs with clawed hands, two long, flat, horn-like structures on its head. It's "fins" are green/blac/red colored and seem to be used to distract enemy and impress its mate.

It can call upon destructive powers and is said to be able to summon the powers of weather. Though large and powerful, the Mayquaza seem to avoid sentient lives.

The Mushlossoms are small, green colored scions with a head decoration resembling a mushroom. Known for their dancing and hypnotizing eyes, the small creatures are honored and a loved sighted at Noldágorel. They can make use of grass powers though can also summon upon dangerous spores to stun those that threaten them. The Mushlossoms are shy creatures. 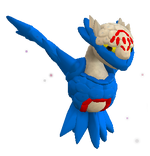 The Tavlias is a unique Scion found in the Shrine of Vanguinar at Noldágorel and the main reason Rambo Command raised starbase 30 at Noldágorel instead of leaving it in the capable hands of the Order of Light. The creature is blue/white colored, is able to fly and use water powers and seems to be very ancient yet young in behavior. Playful, curious and easily scared the creature seems to be unable to leave the Shrine unless a Vanguinar lifts the curse upon this poor creature.

It is said the creature as foresight powers and can give those that it finds honorable the gift of hope and prosper.

The Png files require the Dark Injection and the CamBenColor Pack

Retrieved from "https://spore.fandom.com/wiki/Planet:Nold%C3%A1gorel?oldid=747504"
Community content is available under CC-BY-SA unless otherwise noted.