Nex is the forested and temperate homeworld of the Trucinex. The planet is famous for being home to the final massive battle of the Trucinex War, where the allied forces of the Capricorn Sector Alliance ended the Trucinex threat to galactic peace. Now, the planet resides under Imperial rule under the Praetor Nenabie.

Nex is the home of the Trucinex species and the planet on which they evolved. As the Trucinex advanced into space, Nex became the center of their vast empire which conquered those who they claimed as heretics of the One God. However, the Trucinex choose the wrong enemy when they attacked the Capricorn Sector Alliance, sparking a large war, known as the Trucinex War.

As the war progressed, empires like Rambo Nation and the Delpha Coalition of Planets joined with the CSA against the Trucinex.

As the war dragged on, a strange virus began infecting Trucinex, transforming them into Viralnex. Though the virus almost overcame Nex, it was eventually defeated just in time for the final battle of the war. A massive allied force, of the CSA, Rambo, DCP and even the Xhodocto pounced on Nex and a massive battle occured. However, in the end the Trucinex were defeated and their corrupted leader, the Nex Prophet was killed.

In the aftermath of the war, the planet began to recover under the protection of the United Republic of Cyrannus and though the Trucinex themselves split, Nex remained in the Republic's fold. Luckily, the planet was not attacked during the Intergalactic War, or even the Great Cyrannus War. However, when the Galactic Empire of Cyrannus was formed, the planet came under Imperial control. Nenabie, a respectful and powerful man was made the praetor of the Nex sector and led his people through the transition from the Republic to the Empire.

When Apollo, former president of the Republic arrived at Nex with his fleet of loyalists, he was warmly greeted by Nenabie, who invited him to his palace. It was then that Nenabie was contacted by Mortikran, and told him that he had captured Apollo. Apollo, however managed to escape and although the Remnant engaged the Imperials for the first time over the planet's surface, they would be forced to flee. As a punishment for the failure to hold Apollo, the Emperor ordered a larger Imperial occupation force to inhabit the system, something Nenabie loathed. Later that same year, Nex was the site of an assassination attempt against Nenabie, by the cunning Agnassana, who sent her assassin, 88 to kill him in order to gain more power in the Outer Rim. Unfortunately for her however, Tyrómairon knew of this plot, and sent his own assassin to kill 88, something he succeeded in doing.

Later in the Dark Times, machinations orchestrated by the dreaded Xeranbha resulted in the near destruction of Nex. The Viralnex were reborn and soon ravaged the planet under the command of the mad scientist Orthonex. By the time the crisis ended, Nex was heavily damaged, Nenabie was dead and millions killed. 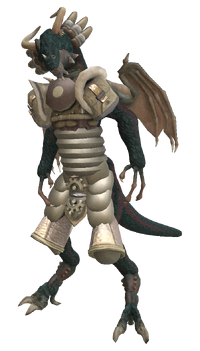 The Trucinex are a species of bipedal dragon like creatures that evolved on the watery world of Nex, in the Unknown Regions of Cyrannus Galaxy. The Trucinex were successful hunters in prehistoric times and their vast intelligence contributed hugely to their culture when they became sentient and used their power over flight to quickly spread across Nex, becoming a formidable force.

The Trucinex, as a species are quite immune to many diseases, however no immunity presented itself when they were corrupted into mindless monsters known as the Viralnex, by the so called Purity Virus.

Trucinia is one of the larger cities found on Nex. It is located in a valley with her capital building constructed at a large hill. this way the building became the center of the city and most houses and building were build around it. Due to this central position it became the most prominent building in the entire city.

The city itself is pretty old and already excits for over 1500 years (probably constructed around 1500 BNE). Though over time the city changed as first the city only had smaller buildings and houses. In more modern times as sky scrapers were build and designed, they now mark the city and give the city her present look. The sky scrapers are now found all over the city are relitivaly the newest buildings. As such Trucinia was given her status as a city instead of a town.

Over the years as the Trucinex Empire grew and prospered Trucinia became an important location as the city was protected by 3 massive shield generations, protecting the many Trucinex inhabiting the city. It also recieved a decent economic growth and became an important import city from the rest of Nex. During the Trucinex War the City came under attack during the Second Battle of Nex. The battle was led by Captain Rambas II and the USS Hood. After an intense fight the city eventually fell into Allied hands as the General present at Trucinia was killed and the shield generators were destroyed by a stealth team. However, the following orbital bombardment ruined part of the city, much to the dismay of various commander. Later on during the siege of Nex the Trucinex got hold again of the city, but due to the intervention of Apollo himself the city was once again secured into allied times.

When Nex became divided in 5 sections, the city of Trucinia was placed under Rambo control. Together the Rambo and Trucinex rebuilded the city and repaired all damage done to the city. In turn the Rambo gained the favor of the Trucinex people of the city. Upon the joining of the Trucinex into the URC the city mostly remained inhabited with only Trucinex. Years later the city fell under Imperial rule upon the forming of the Galactic Empire of Cyrannus.

Trucinico is the largest and most important Trucinex city on Nex, holding the seat of their government.

The city, floated above a massive underwater cliff deep within Lake Nexe, the city provides unique scenery and architecture not found elsewhere at Nex. Early in Trucinico's history, the city was just one of Nex's many city-states. Soon after, the city, along with the others scattered around the planet, was engulfed in a long and difficult civil war. It was not until the rule of Nex Prophet IV that the conflict ended and Nex was united under the Nex Prophet who lived there to recently, with Trucinico as the planetary capital.

Upon the status of capital city Trucinico expanded greatly, gaining a lot of wealth and influance. Soon after, sky scrapers were build and became the most prominent sight at Trucinico, though in result the city became highly populated. Over time all goverment officials had a luxerious appartment in Trucinico, and the Nex Prophet gained supreme rule over Nex, with Trucinico as the prime capital of the Trucinex Empire! Upon the Empire going to war Trucinico became the main militairy command center and many ships were launched from the city and her air fields. Upon the change of tide, the city was inforced with shieldgenerators, like the ones used in Trucinia. However with the arrival of the allied fleet and their siege of Nex Trucinico suffered the most of all of Nex, suffering various orbital bombardments and militairy troops fighting among the streets. Many buildings became damaged and eventually the Empire capitulated.

When Nex became divided into 5 parts, Nex fell under influance of the URC, though first relations were troublesome between the URC and the Trucinex. Yet over time relations improved and Trucinico became a major intergalactic city upon the Trucinex joining the URC. The city was fully rebuild and prospered and upon the forming of the Galacitc Empire of Cyrannus, her wealth still increased!

Nenabie and Apollo on Nex during the Dark Times.
Add a photo to this gallery

“A loyal Imperial planet. Its history doesn't do it justice.”

“A magnificent planet, with lush woods and plains. Sadly it was ruled by a dangerous individuals who managed to great harm.”

“A beautiful planet populated by a proud and dedicated people. Hrmph, this galaxy's people should treasure this jewel, not shun it for its history.”

Retrieved from "https://spore.fandom.com/wiki/Planet:Nex?oldid=696372"
Community content is available under CC-BY-SA unless otherwise noted.