New Cyrannian Republic
“A nice, peaceful colony. New Capricaerón may be too warm for my taste, but it certainly has a lot of history.”

New Capricaerón was the first colony established in the Quadrant Galaxies several years ago by the United Republic of Cyrannus during the early stages of the Second Galactic War. New Capricaerón is a hot, humid world consisting of vast tropical zones that stretch from pole to pole, interrupted occasionally by warm shallow seas. The settlements on New Capricaerón are generally small, respecting the vast amount of native life on the planet. The planet is known for being an adventurer's paradise, with citizens from around Quadrant 82 often visiting the planet.

New Capricaerón wasn't attacked by the Imperial Alliance during the Second Galactic War, though it was briefly occupied by the Confederacy of Allied Systems during the Great Cyrannus War, though it was later liberated by the Cyrandia Alliance. New Capricaerón remained loyal to democracy when the Galactic Empire of Cyrannus was formed and became one of the key planets in the Republic in Exile. When the New Republic was formed, New Capricaerón gladly became one of its first members, benefiting from the renewed trade between other planets of the Quadrant, especially those in the Rambo Capital Sector, which is located relatively close by.

New Capricaerón was initially founded in 10 BNE/03 BQF a year after contact was made between the Capricorn Sector Alliance and Rambo Nation. The first Cyrannian extragalactic colony in modern times, New Capricaerón was colonised as a symbol of peaceful cooperation between the Libertus and the Rambo Serindia, with both races enjoying dual membership of the growing colony. Surprisingly, despite its importance, it was not attacked during the Second Galactic War against the Imperial Alliance, allowing it to grow while other colonies feared an attack could come at any time.

Rise of the Empire[]

When the Great Cyrannus War began, the Confederacy of Allied Systems quickly besieged and conquered New Capricaerón in the hopes of damaging the moral of both the Republic and Rambo Nation. However, their rule over the colony was quickly overthrown by the people of New Capricaerón themselves, who launched a massive rebellion in the capital of New Delphi. Though the city was severely damaged in the course of the battle, much of it was repaired by the Republic when they liberated the planet.

When the Galactic Empire of Cyrannus was formed, New Capricaerón became a member of the Republic in Exile, refusing to collaborate with the new Imperial regime. However, Senator Ramthrace was forced to remain on Orbispira, where he plotted with fellow senators such as Mer Mirea and Raen Magalen to overthrow the Empire. However, their efforts eventually proved meaningless when Apollo and Apaltar managed to form the New Cyrannian Republic peacefully.

As a willing new member of the New Cyrannian Republic, New Capricaerón along with Apatalore became the leaders of New Republic space in the Quadrants, cooperating closely with nearby Rambo colonies to ensure stability and prosperity in the region. In 04 NE, New Capricaerón was the scene of a transfer between the crew of the Falcon and Commodore Thonaloc of the Phoebus-class Star Destroyer CRS Valour leading to the handover of Xora, a former URC captain who was freed from slavery at Sanderhal.

As a colony built primarily by Libertus and Rambo Serindia, those two races make up the bulk of the inhabitants of New Capricaerón. Due to the traditionally strong relationship between the colony and Rambo Nation, citizens of the planet often claim that they are joint citizens between the Republic and the Nation, despite the legal fact that the Rambo have no official input into the running of the colony. Nevertheless, member species of Rambo Nation are very common sights on the planet (like all Quadrantia colonies of the NCR), who enjoy very good relations with the Cyrannian citizens, regardless of the current tensions between the Republic and Rambo governments.

“It's warm enough for the saurians on this planet, but it's almost too warm for us!”

New Delphi, named after a city on Capricaerón, is the capital of the planet and the seat of Senator Ramthrace, who represents the colony in the New Republic Senate despite his dislike for the warm and humid climate in the city. Situated on the banks of a large river, New Delphi also borders tall mountains and a great rainforest full of massive creatures native to the colony. Though one of the most peaceful planets in the Quadrants, New Capricaerón' capital saw much devastation during the Great Cyrannus War, where guerilla fighters fought tooth and nail to prevent the Confederacy gaining control over their beloved colony. By the time the New Republic was formed, this was a distant memory in the minds of the people of the city who enjoy their newfound freedom under the New Republic.

“A great planet for adventurers. I might bring Ramashe, Laoi, Kara and Gorf here for a vacation if we find the time.”

“A close neighbour to Apatalore and a strong world in the New Republic.” 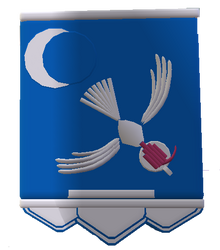 The Sigil of the Rambo House of Ramthrace