Nassau is an independent star port within the Finduila Sector in the Endless Space. This hot and tropical planet lies in the centre of the Zone de Libre and is considered a neutral port. Many from the surrounding planets use the planet to resupply and refuel, and make use of the local saloon and gambling machines.

The might Legatus Finduilica respects the neutrality of the planet, even though it often harbours criminals, thugs and dissidents. They know that attacking this neutral planet might cause even more disbalance in the sector. As such the Legatus makes use of the planet as well similair to the rest, showing their respect and interesst for the well being of the Zone though have a hard time keeping it clean of criminals, smugglers and slavers without being seen as an occupation force.

Nassau was established as a former colony of the Kingdom of the Netherlands and named for the original port of Nassau at Earth. Like its counterpart, the planet is often affiliated with criminals, thugs and pirates and is considered a neutral and free starport.

In february 21 AQF, the half-elf girl Yvenne Thalyssaera was aroused by a human mercenary while in the saloon though was saved in time by the antromorphic wolf, Komamuka Sajin. A few weeks later, Yvenne managed to steal the Gozanti-class cruiser LF-389 when she seduced the visiting Imperial officer Timothy Winthazen. Later on in february the planet was invaded by Legatus forces who either drove or captured remaining dissident forces and declared martial law on the outlaw planet.

The occupation of Nassau was met with dissaproval by many, as Nassau was considered a free haven of politics.

Port Nassau is the main starport at Nassau, featuring Carribean style houses and a large human fortress that protects the port against threats on water and space. The fortress is the main landing zone for vessels and houses the warehouses.

The small village below features the various luxerous houses/motels and less luxerous wooden cabins for those that wish to hide from public sight for a while. The local saloon with its gambling machines is integrated within the stone hill, and is open 24 hours a day! The saloon features a single bar, various gambling machines and tables where visitors can enjoy local beverages and food.

The planet is favored by many, to either relax on the beaches, enjoy the alcohol and gambling machines or conduct in some shady deals and trade beyond the inspecting sights of the major powers in Finduila. 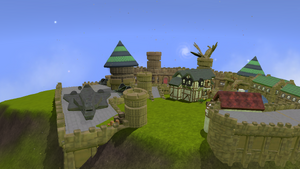 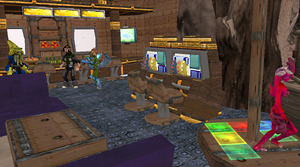 Retrieved from "https://spore.fandom.com/wiki/Planet:Nassau?oldid=746000"
Community content is available under CC-BY-SA unless otherwise noted.