The Syndicate
Nal Amroth is a swamp planet located in the Unclaimed Territories of Quadrant 82, one of the five Quadrant Galaxies. Nearby planets include Terra Prime, Ramalivua and the Lizardian territories. For years the planet was a remote planet, now noticed by those travelling the Unclaimed Territories. However the planet houses ancient secrets, once visited and colonized by the noble and mysterious Yodian, abandoned for years until 07 AQF, when the Syndicate settled at the planet and took it as their new criminal bastion.

Nal Amroth was a swamp planet, where only wildlife evolved and was left without sentient life for years, this all changed after the mysterious race known as the Yodian began exploring space as early of 14.000 BQF, once stumbling upon the swamp planet they identified and named Nal Amroth. The Yodian observed the native inhabitants, who they identified as Scions, creatures they believed were creatures in service of the Atlantica. They constructed a keep at the planet, a fortress acting as a trading and outpost, a perfect observation place where the Yodian could observe the Scions of Nal Amroth in safety. Since 3530 BQF the Yodian disappeared and scattered, abandoning their keep due to the threat of the dreaded and horrifying Quadrantia Grox.

The native Nal Amrothians believed the Yodians were the Gods and though remaining Scions, they gained a better understanding of speech and writing.

For thousands of years Nal Amroth remained out of conflicts due to nothing being there of interest, this all changed when the Syndicate set their eyes upons Nal Amroth, due to her remote and central location within the Unclaimed Territories and close to the trade there, the Syndicate had found their perfect new headquarters. The criminals settled themselves in the partly ruins of the Yodian Keep, enforcing the keep and their rule over the planet, their new headquarters became their primarily base of operations.

Build in ancient times long past, the keep was built by the noble and humble Yodian. The brown fortress is thousands of years old, various houses and walls still stand, at least those not yet claimed by the swamp. The remaining houses are often used by the members of the Syndicate for sleeping quarters, and can be hired for payment. The center of the keep features an arena, formerly used as a market, while the Syndicate uses it as their gladiator arena so all the gathered and attracted criminals can watch people fighting against people and animals for sport, earning the Syndicate a lot of extra and easy money when they win the bet.

The fortress is easily defended, though one side of the walls claimed by the swamp, her integrity is severly diminished, though the swamp and the and present hostile creatures provide a natural defense. The main building lies upon the hill, a small building providing room for the Board of Masters, decorated with the flags of the Syndicate. The various watch towers provide the Syndicate with an overview for defense, though some towers also hide hidden transmission arrays for communication and network access not easily traced back to Nal Amroth.

To enter the city, one can walk the stone bridge, where as the entrance is decorated with statues resembling slugs carrying heavy stones.

Entrance to the keep

The Nal Amrothian Village was built by the Yodian for the native Nal Amrothian, a race they recognized and promising and capable of civilization. Aiding the creatures in building stone houses upon broken trees, they prevented the Nal Amrothian a way of living without fearing the rising floods of the swamp, and the Nal Amrothian now lived save from rampaging Swineroth, lurking Nalamagators and annoying and stealing Naltradon.

The Nal Amrothian maintain their houses, though don’t know how to build new ones, as such those destroyed cannot be rebuild and is a great loss for their vulnerable society. 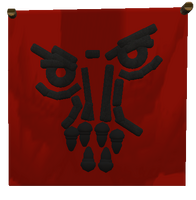 The wildlife found within the swamps of Nal Amroth are all Scions.

The Nal Amrothian are a small bat like species, known for their shyness for others and their avoidence of sentient species. Found to be smart and wise for non-sentient live, there fragile and vulnrable species live in the swamp houses once build for them by the Yodian, whom they honor.

Nalamagator are alligator like Scions native to the swamps of Nal Amroth, these deadly and agressive marine Scions lurk in the waters, waiting for their prey to come by. They have a powerful bite and are swift under water, using their tails for swimming. 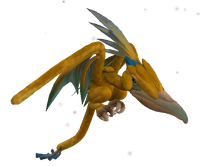 Naltradon are small bird like Scions, using both grass and air powers. The Naltradon are quite agile and swift, often found annoying due to their high screech singing and their pecking and stealing of food. Often found in swarms, they can be agressive and hostile as well. 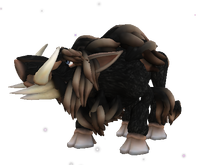 The Swineroth are swine like creatures found at Nal Amroth, lving in the swamps in search of food they are often the prey of the Nalamagator, they are often used as caddle and befriended by the Nal Amrotian Scions, though can be qutie agressive and strong when agitated or when having young.

They are quite agil, even though they have quite a sturdy build.