Kreeta is a hot tropical vulcanic planet located in the unclaimed territories, south-east of Sepheria, the homeworld of the Sepherian. The planet is easily overlooked as the native Teekra are not space faring, though it was once the side of a battle during the Rambo Resistance and the Galactic Empire of Cyrannus during the Dark Times.

The Teekra came into existence and sentient around 7800 BQF, the roden like species soon settled themselves in the natural valleys that gave shelter against the weather and hostile creatures of Kreeta. The Teekra soon build state of the art buildings, with lots of decoration in bright yellow and blue colors, a signal of their own enlighten, or at least that is what they believe. Over the planet various cities and villages were erected, with their own major or governor. Within their history, there has been no war or conflict among the rather peacefully Teekra, a remarkable feat.

Most cities have their own library as well, as the Teekra love wisdom and knowledge above the comforts of home.

During the fifth month of 06 AQF commander Mortikran of the Galactic Empire of Cyrannus invaded the planet to destroy the Rambo Resistance base located at the planet. The native Teekra witnessed the burning of starts and falling ships, though none of their cities was caught in the cross fire, a miracle.

After Mortikran was done destroying the Resistance, the Empire left the planet.

Most of the Teekra cities and holdings are built within the many natural valleys found at Kreeta. The valleys provide the right ground for harvesting and protects the natives and wildlife against the sometimes strong wind currents that are raging over the planet and give a natural protection against the wildlife. The cities are known for their libraries, apartment build in bright yellow stones and bright blue roofs.

Each cities has its own elected governor or mayor to govern the daily affairs. Each Teekra is allowed to visit any settlement, though some holdings prefer travel papers before allowing you to enter it.

The Teekra are natives of the planet Kreeat and are small rodent like species. The Teekra themselves are small sand crawling creatures that developed a nice architecture and library where they house their wisdom and chronicle their history. The Teekra are by nature, curious, gentle and a kind species, always aiding those that require need, even if they are not from their own species or from outer space. Though their species doesn't count more than 50.000 individuals, they are spread over the planet near water resources, which are spare. The Teekra prefer small cities and villages, which allows them to live in harmony and peace.

The Teekra have large bone structures at their backs to keep themselves cool in summers, and large claw like hands to dig in the sand in search of food. 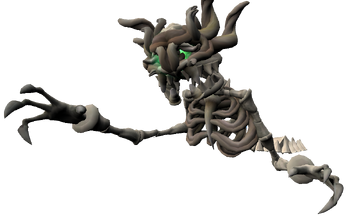 The Kreleton are fierce and terrifying creatures found in the valleys and forests on the lush world of Kreeta. These skeleton creatures have haunting green eyes, known to hypnotise victims before "draining" the life energy of their victims. The native Teekra know to fear these creatures and avoid them. As such none of them leave their cities after twilight and before sun set.

The Kreleton can summon forth powerful bone attacks and ghost abilities.