“Oh, Talmyr can be a fine place...at times. The winters can drop down to something ungodly and much of the wildlife there is sparsely spread and what wildlife there is is generally dangerous. Okay, so it's not a fine place, I can't do anything about it. Just stay in the walls of the cities and I think...mostly...we'll be alright there.”

Talmyr, also known as Dalmira, The Talmiric Province and the Far Northwest is a large yet sparsely populated region of northwestern Koldenwelt. Talmyr is one of Koldenwelt's distant and mysterious lands; filled with creatures both large and imbued with dark magic. Perhaps one of Koldenwelt's most dangerous regions altogether, Talmyr is wide and geographically diverse, containing multiple cultures that have retained their identity since ancient times.

Talmyr is one of many names given to the region, although Talmyr in itself is the most commonly given name. In ancient times, the Natelevarí Elves, one of Talmyr's first cultures had originally named their lands Natelmira, and the Taeleni Elves in modernity name this land Taelmira. The Dalmiri Humans in turn also name this land Talmyr and sometimes alternate it with Dalmira, and the Talgrim Dwarf culture tend to name the land Talgrammir. In Koldenwelt's most ancient times, Talmyr's wide plains were inhabited by the Utturu, monstrously large elephant homnids that ruled over the land and waged war against the Natelevarí Elves. The Utturu were eventually destroyed by the Natelevarí Elves and the Earthsea League over 20,000 years ago. The Orayu remain in Talmyr as one of its oldest surviving cultures, having existed during the earliest times of written history.

In some point in Talmyr's history, Kaicaiusarin, the Simulacrum of Fear was imprisoned underneath the island of Azhnatmukand in the centre of the Dalmiric Bay. This gave rise to the dark energies that permeate the very soil of Talmyr, and sired multiple dark races through corruption, one of which was the Wendigo. Many creatures pre-existing had began to mutate and evolve into darker, greater versions of their former selves, and some of these races continue to plague Talmyr. The dark energies surrounding Talmyr was also a point of interest of the Linnwyrms, who now reside on Talmyr's northern coasts and seas. The Natelevarí Elves were eventually conquered and assimilated by the Orichalcum Elf Imperium, which left Talmyr mostly ungoverned and had allowed multiple other species to arise in power. Some Natelevarí Elves were left behind, and what remained of them eventually became the Taeleni Elves.

There are some instances of Proto-Dalmiric cultures existing in the far north of Talmyr's coasts which may have been the first settlers that later became the wider demographic known as the Dalmiric Men. Most of these ancient cities date back to the late seventh millennium BNA in history, although historical record only began when the diaspora of old human cultures migrating north from the Tropical Lands (following the dissolution of the Orichalcum Elf Imperium at the end of the fifth millennium BNA). As the Proto-Dalmiric cultures and southern cultures settled in Talmyr, cross-species breeding eventually created the modern Dalmiric Men. What became the Talgrim Dwarf culture following the migration of Dweorg from the south in Talmyr settled in approximately 4940 BNA. The three Deiwos cultures; the newfound Dalmiric Kingdom, Talgrim Dwarves and the pre-existing Taeleni Dominion existed in relative stability (the Dalmiric Kingdom and Taeleni Dominion less so) until the beginning of the third millennium BNA.

By 3985 BNA, Talmyr was terrorised by an immensely powerful necromancer known as Ahdramilús; his power amplified to the degree where the region known as the Lightless Plains was created. In 3942 BNA, the Dalmiric city of Azhnatmukand was created (over the island of which Kaicaiusarin was imprisoned) in order to shelter much of the Dalmiric people against Ahdramilús' attacks. Ahdramilús' power had grown until 2041 BNA, when the Legion of Shiarchon had invaded Talmyr to end Ahdramilús as a global threat. Between 2041 BNA and 646 BNA, Talmyr was mostly regarded as stable, although between 646 BNA and 635 BNA, a massive civil war erupted across the Dalmiric Kingdom.

After 635 BNA and until 32 NA, Talmyr was relatively peaceful. In 32 NA however, Talmyr was Talmyr was conquered by the Legion of Shiarchon, which occupied the region until 33 NA when an even greater cataclysm occurred; an invasion by the Insomnolence, an ancient evil from the south had freed Kaicaiusarin of her prison; destroying the city and island of Azhnatmukand and plunging Talmyr into darkness. Kaicaiusarin was eventually removed from Talmyr however after a join effort from Zran Kar and Nalashtannylor not long after, and Talmyr was liberated from its darkness. Much of Talmyr however is currently in turmoil as a territorial conflict within the Dalmiric Kingdom has caused much of eastern Talmyr to become a war zone.

Talmyr's extent on Koldenwelt is often at discussion - whilst some believe that the Talmyr region is the area that only the Dalmiric Kingdom control, the Dalmiric Kingdom themselves assert that the entire northwestern region was their ancient definition that they called Tálmyr in itself. Talmyr is one of the coldest regions of Koldenwelt, exhibiting multiple arctic biomes such as boreal forests, tundras, cold steppes (in the south), and polar climate in the extreme north. A majority of the centre of Talmyr is considered a cold steppe whilst the boreal forests populate mainly the west of the region. The further north Talmyr goes, it eventually becomes a tundra region and then polar as it reaches the coasts.

The arctic climate of Talmyr varies in weather during the seasons. Much of the year is dry, though the winter period often sees snowfall. Thus, temperature in the more hospitable region of Talmyr ranges between the extremes of -30ºC in the winter and 12ºC at its peak in summer. The polar regions of Talmyr are rarely ventured into apart from the thinly populated tribal cultures, and sees temperatures lower than -52ºC at times.

Azhnatmukand, The Dalmiric Mountain City was the largest and most populated city in the Talmyr region, and was considered the cultural capital of the Dalmiric Kingdom. The main feature of the city, that is the giant fortress built upon the mountain peak of the island was built close to 3900 BNA under the orders of the Thirteen Kings to protect themselves and the Kingdom from the threat of Ahdramilús the Immutable. Following his death, the fortress became a large settlement and a city had been built around its proximity. The walls were known for their imposing height, standing at over five hundred feet at their highest and over sixty feet thick. It was often believed and boasted by the Dalmiri that no force on Koldenwelt can break these walls down, though the belief was later shattered by the invasion of the Legion of Shiarchon, and then the city's destruction by Kaicaiusarin.

A bay of approximately two thousand miles of coast, the Bay of the Orayu in itself is known to be one of the most north western dominions on Koldenwelt altogether. Due to the subarctic and tundra climates that exist in north western Talmyr, the bay has sparse inhabitation of wildlife and civilian life and there are no roads that lead to the settlements on the bay's coast, leaving it one of the most isolated regions on Koldenwelt's surface. A majority of the Orayu Kingdom's territory is within the bay's underwater terrain, leaving access to their underwater cities impossible to all but those who can breathe underwater. The southern end of the bay is adjacent to a mountain range of which has several active volcanoes.

Generally colder than most of Talmyr due to the lack of forest life, the Lightless Plains is a massive plain of permafrost with a sparse presence of dead trees that have stood lifelessly for over four thousand years. Though not thrown into perpetual night like the Duskwoods, a very thick fog surrounds the Lightless Plains that obscures the sunlight into a grey haze that dimly lights the ground. It is unknown whether any other settlements other than the Soul Market exist, though a few Dalmiric mages have come to assume that there are.

Talgrimhold is Talmyr's tallest mountain, as well as the undercity of the Talgrim Dwarves. Talgrimhold was hollowed in the city itself built during the fourth millennium BNA, and several generations of the dwarven culture have lived safely within its extremely thick walls. Due to its environment, Talgrimhold is rarely visited by outsiders although the Talgrim Dwarves have no reservations of outsiders in their territories. The city went largely unnoticed by the Shiarchon during the siege of Talmyr.

The Dalmiri, otherwise known as Dalmiric Men are the race of men that inhabit the majority of eastern Talmyr. Longer lived and hardier than most men, Dalmiric Men often endure harsh winters in Talmyr and are privy to hunting dangerous wildlife in Talmyr's forests. The Dalmiric Men have settled in Talmyr for over four thousand years and constitute the main populace of the Dalmiric Kingdom, of which is Talmyr's most prominent power. Though very self-reliant and independent in their crafts, the Dalmiric people have consistently been brought between shifting centres of power of greater men, and have lived through many wars.

The Siqis'ari, or Nightlanders are an indigenous race of near-men inhabiting Talmyr's northern coasts. Practitioners of ancient and questionably dark magic, the Nightlanders are somewhat detached from both man end elf, and their customs are equally ancient and questionably dark. Nightlanders, despite being one of Talmyr's native races, are not allowed to coexist within the Dalmiric Kingdom with other races as their presence is often thought of as disturbing and potentially problematic. 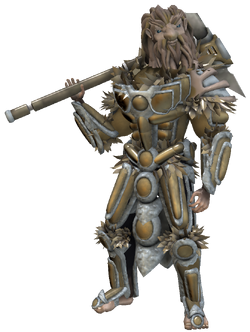 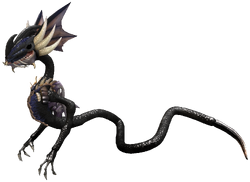 Linnwyrms are Greater Kelodhres who live at the coldest regions of Talmyr, as well as in the world's oceans. A race of vile, dark beings who hate the world, the Linnwyrms are fabled for their terrible power, their avarice and their curses. Pledging allegiance to no one but themselves, these terrifying monsters are among the most hostile of all dragonkind, believing all other dragons are unworthy of sharing the world with beings as great as them. 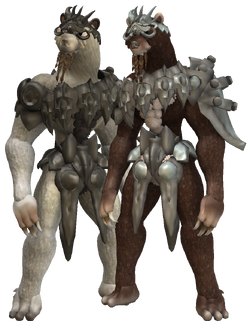 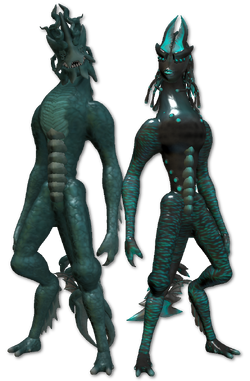 The Orayu are the most prominent inhabitants of the underwater realm of the Orayu Kingdom, upon Talmyr's most northwestern reaches. One of Koldenwelt's most ancient surviving cultures, the Orayu are also one of Koldenwelt's most isolated and enigmatic. The Orayu are distrustful of outsiders, and those who often swim over their waters are dragged down to the depths without a trace. However, the Orayu are not overtly aggressive as individuals and some interaction between them and the Taeleni Dominion has been recorded. The Orayu are very powerful entities magically, and it is often considered unwise to ire them, especially when near the coasts. 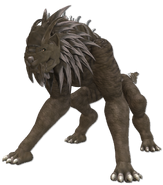 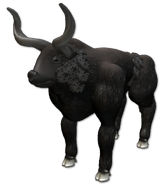 Auroch
Through the region 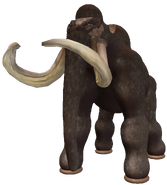 Mammoths
Through the region 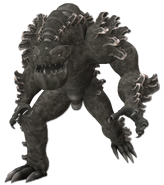 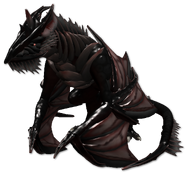 “I do have to wonder what in the twelve hells they were thinking of when they put a Simulacrum under an island.”