Various
“Perhaps one of the most archaic regions of the world. The Sunset archipelago feels like it endured the passage of time much better than the rest of Koldenwelt, with each of its islands inhabited by a wide array of unusual beings. Each a great extension of life by itself.”

The Sunset Isles are an archipelago composed of numerous islands located at the far west of Koldenwelt, considered to be the westernmost point of the known world.

Extremely few records exist of the Sunset Isles before 15,000 BNA, implying the region remained uninhabited by sapient nations for most of Koldenwelt's history. The oldest records of civilization come from the Athsulisstai, who resisted war against an Orichalcum Elf invasion at around 14,000 BNA, though the isles are believed to have been inhabited by great beasts since the Prehistorical Age; the Ancestral Dragons of the Slumbering Island, who are believed to have existed since the age of immortals, are widely agreed to have later given birth to a number of draconic races, including the Steelrust Dragons of the Silver Steppe, the Deep Sea Dragons of the southern ocean and the Pus Dragons of the Western Forests.

The coming of the Old Age marked the birth of many more nations across the isles. At the southern Slumbering Lands, the ancestors of the modern Vulcaraptors had created a great dominion which was eventually collapsed by the birth of the Fire Colossus Vulcardentron, while the Dimetraniorn established their own kingdom at around 4,000 BNA. The Athsulisstai founded their Kelodhrosi Commonwealth at around 3,000 BNA and the Phfiion Empire are believed to have appeared some time after that. The Old and New Ages also marked the arrival of many outsiders to the Isles, including the Kamate clan of the Khargrim Greatholds and the trolls of the Realm of Rhaz'Gan.

The archipelago of the Sunset Isles is located at the far west of Koldenwelt and is divided in five great islands, with a great number of far smaller ones spread across it. It borders the western shores of the Silver Steppe and the Highmoors. It is one of the most varied parts of Koldenwelt in terms of physical characteristics, as each island possesses a wide array of different geography, though the great islands are all known to possess some extent of plateaus and at least one mountain.

The climate of the Sunset Isles is predominantly temperate to the north and tropical to the south, with all of the islands possessing significant forest ranges. The change in temperature between the summer and the winter is considered moderate compared to most regions of the world.

The Meridian Island is the second largest island of the Sunset Isles and is one of the densest and most populated islands. The homeland of the Athsulisstai and the central island of the Kelodhrosi Commonwealth, history on the Meridian Island dates back over ten thousand years, and is home to over four million inhabitants on Koldenwelt. The island is among the most safely guarded locations in the world, with a reputable history of never being successfully invaded.

The Slumbering Island is the name given to the largest island of the Sunset Isles, located at the far west. A land mainly composed of lush green forests and plains, it is also home to a mountain range and a volcanic desert at its south which serves as a significant contrast to the rest of the location. The island is widely famed to serve as the home of the animals known as dinosaurs. Left untouched by the world's superpowers through history, the Slumbering Lands have been left mostly untouched by civilized nations though some civilizations have turned their eyes to it due to its vast abundance of natural resources. 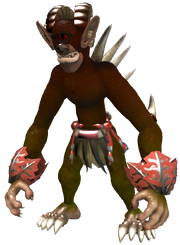 Grokorocks are a race of brutal, aggressive giants found at the Slumbering Lands. Towering nearly fifteen meters tall when adults, these rare cyclopes spend their time alone, claiming portions of land as their own and generally demanding tribute from those who venture into them at the threat of death. The torso of Grokorocks continues to grow as they get older while the legs do not, eventually forcing these giants to assume a gorilla-like stance to be able to walk. Because of the threat they pose, the civilized nations of the Slumbering Lands often make effort to wipe them out. 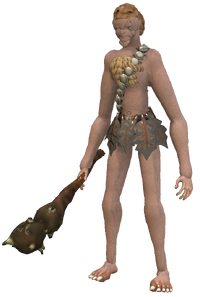 Troglodytes are savage, man-like creatures who inhabit the underground caverns of the Slumbering Lands. A primitive race, they only possess knowledge of the most basic tools and speak through grunts. Their cave-centered existence made them known by the name of "cave men" at the east, a name which has sometimes been used as an insult to humans in general. Troglodytes are marginally stronger than other humans in physical terms and are also quite numerous, with individual cavern complexes housing potentially hundreds of them, which makes them a potential threat to adventurers or settlers. 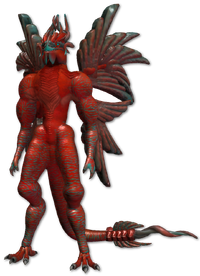 The Athsulisstai are one of the founding races of the Kelodhrosi Commonwealth, and are the original inhabitants of the Meridian Island and therefore are the socio-politically dominant culture. An ancient culture that has been present on the Meridian Island since the times of the Orichalcum Elves, millennia of history against them and into the modern age has instilled a highly stoic nature in the Athsulisstai, who often recite their ancient motto; Koldenwelt belongs to no one. They refrain from conflict, though they are not against war if their way of life is threatened. 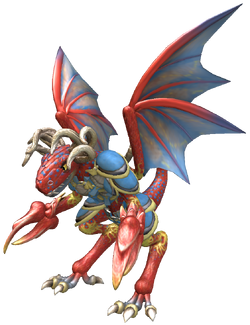 The Nephrodrakes are a young species of humanoid dragons native of the northern coasts of the Meridian Island who have pledged their allegiance to the Kelodhrosi Commonwealth circa 1,000 BNA. A draconic race with great affinity to the sea, they are distinct among other Kelodhres by their lobster-like pincers, which grant them powerful grip but are less dexterous for using tools than normal dragon claws. The Nephrodrakes are generally welcoming to outsiders, but will fight fiercely if provoked and are known to use their size and pincers to intimidate potential opponents. 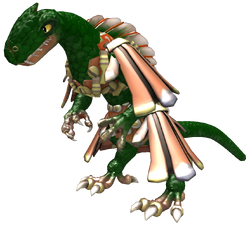 The Dimetraniorn are one of the older races recorded in the Slumbering Lands. A species of humanoid dimetrodon hailing from the northern swamps of the island, they have established a kingdom which dates from about 4,000 years, which has expanded its influence through the coast. A peaceful race, the Dimetraniorn are perhaps the most welcoming of the Slumbering Lands's races regarding outsiders, with many of them preferring to stay on their good side in order to enter the island through their harbors. They have domesticated a number of the dinosaurs who call the northern regions home, making use of them as livestock and war beasts. 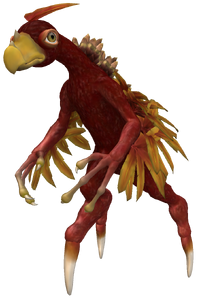 The Phfiions are the founders and most prominent race of the Phfiion Empire. The Phfiions are tripedal, upright avian creatures with a vague aesthetic resemblance to Phoenixes. The Phfiions are a highly technological species, and are very skilled at creating mechanical devices. They also have a reasonable affinity with The Source, and have reasonable magical capability. The Phfiions are known to be self-serving, but they are not callous and have an honourable reputation for their prevailing sense of compassion. They're mostly known throughout Koldenwelt as cunning and wealthy merchants. 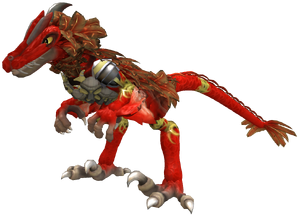 The Vulcaraptors are a race of intelligent and calculating dromaeosaurids who hail from the surroundings of Vulcardentron's lair. Considered one of the most dangerous races of the Slumbering Lands by the more civilized species of the island, the Vulcaraptors are potent predators whose culture revolve around demonstrations of power, and they are known to join up into large packs and go on hunts for other intelligent races for the purpose of devouring them. Standing as large as an orc and with enough strength to shred one to pieces with their claws and teeth, the Vulcaraptors are also well known for their affinity with fire magic, with even their newborn hatchlings being capable of breathing jets of flame from their jaws. 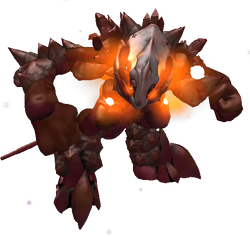 The Talari were the original inhabitants of the southern Thala Island, and were conquered an enslaved by the early Phfiion Empire. They were eventually freed from slavery as an military tactic, and later gained full equality with Phfiions. They are animate rock creatures with a raptor-like appearance, spiritual outlook on life and a natural affinity for The Source. Due to numerous cullings in the Phfiion Civil War and the War for the Eye, and due to a slower reproductive rate, the Talari are somewhat more rare than the Phfiions, and are not as well known around Koldenwelt. 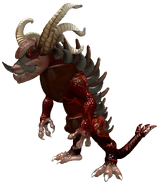