Caxildiz
Merovar
“Sprak is our home. It has been blessed by Lord Karps' magnificent glory. You are well to respect that if you wish to stay here, outsider.”

Sprak is an island located south of the Tropical Lands and north of the Archipelago of Koldenwelt.

Sprak Island was, thousands of years ago, part of the ocean floor. The region was part of old Sea Giant civilization, and Infernos Mons was notably used by them as a treasury to keep the legendary Exacutus Vulcanus imprisoned after it was possessed by a dark spirit. The area which would become the island had prosperous Sea Giant cities, being one of their heavens of prosperity.

However, during the war against Caligaduro Provectus and Vargash, the Sea Giant cities around the region were completely devastated. One of the survivors of the region, the Guardian Giant Harkin, sealed himself inside Infernos Mons and then sealed the volcano itself to keep Caligaduro's forces from both turning him into a thrall and from getting their hands on the Exacutus Vulcanus. The damage on the region was so intense that no traces of the Sea Giants' cities have remained except for extremely scarce ruins.

At the great battle between the Old Colossi and Vargash during the Adamantine Age, the region was raised off the ocean floor and became an island by the Tritonomarth. Legends say the titanic Water Colossus tackled Vargash so hard, the ocean around it was torn apart and the island was raised off the seas.

Following the end of the war against Caligaduro Provectus, life started to appear in the risen island. Tribes of several different species fought for domination across the island, but their war would end when the Guardian Giant Karps arrived at the island about 8,700 years ago. Using his tremendous powers, Karps took control over the island's inhabitants and named it Sprak, after himself. The tyrannical Guardian Giant would submit the island's inhabitants to treat him as their god and destroy those who opposed him. The most notable of these tribes would be the Caxildiz, who would follow Karps willingly.

Sprak is a tropical region composed mostly of plateaus. Most of the inner regions of the island are filled with jungles where wild animals rule, with the exception of the area around Infernos Mons, where the terrain becomes far more rocky. Sprak has large extensions of beaches across nearly all of its surroundings, though some regions have large boulders instead.

The climate of Sprak is tropical, with a mean temperature is 19ºC for all year long. Raining is very common and often intensifies whenever Infernos Mons releases smoke. Sprak possesses an extensive cave system which can be entered through Infernos Mons, leading to several miles underground. Very few of this underground maze has been mapped as of now.

Infernos Mons is a volcano located at the center of Sprak Island. Shaped in the form of a volcanic cone, Infernos Mons is around 4,012 meters tall. The volcano is very geologically active, its last eruption being recorded to have happened in 123 BNA. Whenever Infernos Mons erupts, Karps uses his powers to stop the lava from completely destroying the island.

Infernos Mons possesses an extremely extensive cave system, created by the Sea Giants who once used it as a treasury. At the depths of it, lives the Guardian Giant Harkin and the cursed lava axe Exacutus Vulcanus. The caves are home to a variety of creatures, such as Grozidius, Fogolarths and Fire Smeevers.

Khrokar Island is the name given to the fossilized remains of the Tritonomarth after his death at the end of the war between the Old Colossi and Vargash. The island is composed mostly of jungles and incredibly huge spikes which appear to go nearly a kilometer in size.

Khrokar Island has no native sentients on its surface, but the sea around it is heavily populated by Khrokar. In addition, the New Water Colossus Tangilaruka can be found swimming near this island more often than anywhere else on Koldenwelt. Because of this, sailing is extremely dangerous. Nonetheless, Caxildiz and Merovar settlements have been created on the island in hope of expanding territory and looking for profit. 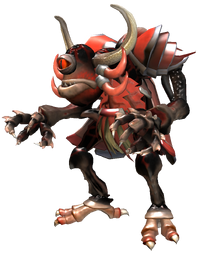 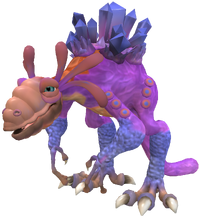 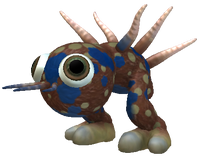 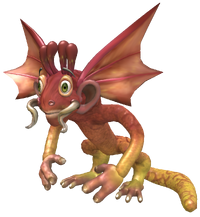 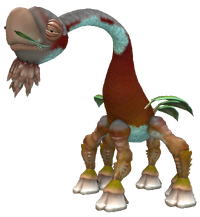 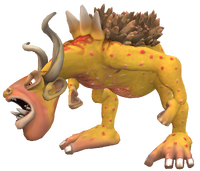 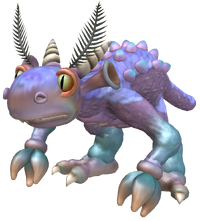 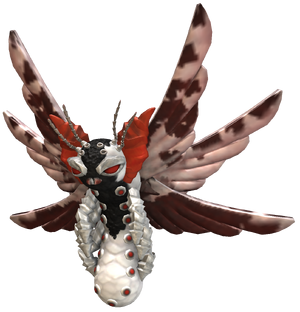 “All hail our home and Lord Karps!”

“This is MY domain. You must follow my rules under MY domain!”

“Beautiful beaches and jungles, as well as a large concentration of precious metals. This island surely is a great addition to the Dynasty.”

“Our work must be finished.”

“To think that, had the winds been a little different in this part of the ocean fifteen thousand years ago, our ancestors could have landed on this great isle rather than on those that we ended up calling home. Perhaps some of them did, but failed to survive its dangers.”