The Silver Lands are an extension of land which makes up the more central parts of Koldenwelt's western continent, known for its great quantity of precious ores.

The Deadlands, known also as the Grey Wastes is a region within the Silver Steppe that is governed by the Insomnolence. A largely mountainous area, the Deadlands are a series of deep valleys that appear to be in a labyrinthine fashion, most possibly out of the Insomnolence's architecture and excavation of the area whilst building their numbers. Whilst the coast on which it rests upon is accessible from other regions in the west, venturing to the same coastline on land is impossible as the Deadlands' valleys surround the area. Whilst not particularly large in surface area, the Deadlands take up a significant space on this coastline. Due to the presence of void magic in this area, the Deadlands, true to their name, is completely devoid of wildlife, and what flora remains from the first conquest of the Insomnolence have become petrified. 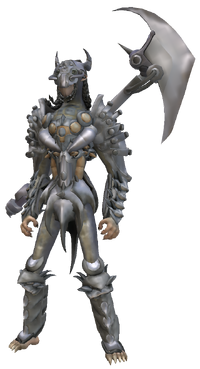 The I'quatas Orcs, or Qwatangar and sometimes Great Mountain Orcs are a tall militant race of orcish deiwes who live in the I'quatan Mountains of Koldenwelt. Though a race built on unification, I'quatas Orcs are nonetheless a race to solve their issues through the means of archetypal violence on the grounds of ancient doctrine. Though, in more modern practices and philosophies of the orcs, most have come to solve their problems through the means of speech rather than the use of their fists, somewhat breaking from the traditional orcish customs. However, I'quatas Orcs are mindful of the lesser physical abilities of humans and elves and more than often respect foreign customs, and tend to have stronger bonds with the dwarven races of the world due to their common earthly, hardy origins. 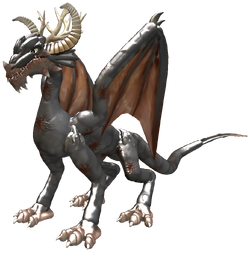 The Steelrust Dragons are a species of Greater Kelodhres who lives at the taller and colder regions of the Silver Steppe, more often sighted at the borders of the region of Talmyr. Proud and arrogant creatures, they are well known for possessing scales made of solid steel and for their great power over ice and wind, which they use to create powerful ice storms. Steelrust Dragons need to periodically molt due to their scales rusting over time, in which case they will leave their old rusted carapaces behind and wait for a new layer of steel scales to grow, a period where they are especially vulnerable to damage. 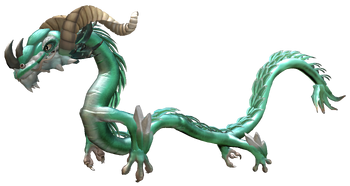 The Sky Drakes are one of the races of True Dragons of Koldenwelt, symbolizing the school of the wind of the Source. Out of the True Dragon races, they are among the most open to non-Kelodhros, and are also historically known to be one of the most acceptable to being used as mounts. Immortal civilizations have befriended and ridden Sky Drakes since the Orichalcum Age, though as of the current date, few are still able to do such a feat. The Sky Drakes are closely linked to their neighbours, the Water Drakes and the Lightning Drakes, who they share many characteristics with. 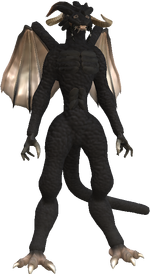 The Tuungar are a race of Kelodhros that inhabit the Silver Steppe of Koldenwelt and are the founding race of the Ulus of Khulan; an expansive empire consisting of a conglomeration of tribal warlords serving under the Khulan Dynasty. A militant and discplined people, the Tuungar take great pride in their history and martial capacity and are renowned for their combat prowess and large numbers, alongside having an innate connection to the magical school of venomancy and the Deathwyrms native to their region of the Silver Steppes. 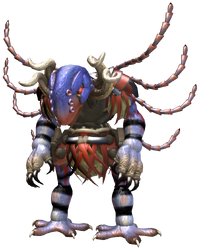 The Gros are a species of large, imposing reptilian beastmen native of the central reaches of the Silver Steppe. Until recently, they were a fragmented race of bickering tribes who fought one another constantly, until they were united under the banner of the individual named Gnorvi and founded Karnagtah's Legion, which now seeks the domination of the Silver Steppe and the subjugation of all that opposes them. A physically intimidating race, the Gros possess an extreme sense of superiority, which leads them to see all other species as inferiors who serve only to be enslaved and turned into work force for their empire. 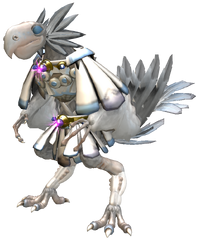 The Khuma are a race of humanoid birdfolk granted intelligence by the Colossus Sempiternum. They built the great floating city of Alkatar where they and the Colossus reside, with them naming it the Magocratic City-State of Alkatar. Wise and stern, the Khuma believe in the study of the arcane arts, which they seek to master and gain the favour of their goddess mistress. Biologically, they stand at the size of the average man, their feathers silvery in colouration and their power over arcane magic naturally formidable, though they are completely incapable of using elemental magic. 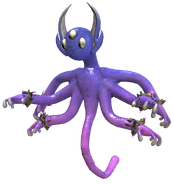 Sempiternum, New Colossus of the Arcane
Resides within the Magocracy of Alkatar.

Emryredin, New Colossus of Wind
Lives at the mountains of the east.