N/A
“What? You want me to get my boots stuck in mud and get bitten by every mosquito in the continent all while gnolls, goblins, monkeys and giant serpents all wait for a chance to take my head off my shoulders? I'm not setting a foot on that damned place.”


- Elven Adventurer on the Razewater Swamp

Razewater Swamp is a large expansion of wetland located at the northeastern corners of the Western Forests of Koldenwelt. A wild landscape, untouched by the more civilized races of the world, the swamp is known for its main three inhabitants; tribes of gnolls, goblinoids and monkey beastfolk who have fought each other for control over the region for generations. Because of its less-than-hospitable natives and dangerous wildlife, only the most daring and well-equipped dare enter the place.

There is little recorded history of Razewater Swamp due to the lack of true civilizations in the area. The Varkorian Goblins and the Munki have inhabited the region since as far as other races can remember, with both eventually spreading across the Western Forests with variable results. The gnolls who settled in the region are believed to be descendants of tribes who migrated north from the Tropical Lands at around 300 BNA, where they begun fighting the goblinoids and Munki over control of the swamp's more inhabitable areas - the tribes of gnolls currently make up the more hospitable parts of Razewater Swamp, though due to the world's general distrust towards gnolls, they rarely make contact with outsiders.

A great expanse of wetland spanning several kilometers, Razewater Swamp is primarily situated upon the spring of Razewater River, from where it then flows west. The swamp is very heavily forested, with some portions of the land having the sun completely blocked by the trees. During the more rainy parts of the year, the swamp tends to flood, covering much of it in water which makes traversing it on foot even more difficult.

Razewater Swamp is heavily inhabited by wildlife; hundreds of insects make their home in its pools, with swamps of mosquitos being the most infamous. The swamp is home to many species of fish, frogs, salamanders, small mammals like beavers and rabbits, and reptiles such as monitor lizards, snakes and crocodiles. The most dangerous creatures of the region are certainly the Marsh Hydras, carnivorous, seven-headed beasts who possess seven biting heads and a territorial disposition.

Because of its hostile natives and wildlife, few individuals from great civilizations come to Razewater Swamp, though it is known as a favored place among hunters of wild game. Among the mages of Koldenwelt, alchemists are the most keen to exploring the region, as Marsh Hydra parts - especially their hides and blood - are known to be extremely valuable ingredients among their ranks. 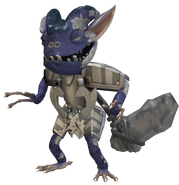 Munkis
The primate beastmen known as Munki hail from the Razewater Swamp, and are well known for their mischief and their history with the Lagosi. 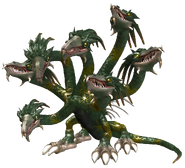 Marsh Hydras
Found in many wetlands across the world, Marsh Hydras are famed for their seven heads and their precious blood, primarily used for alchemical purposes.