Throne of Qliphoth
“There is little to be found within those lands beyond only death and metal. It is a place so toxic and vile that even the very rain itself wishes to kill you. Whatever forms of life that persist there has grown to be tougher, stronger, and far more dangerous than most creatures that lie eastward of the plateaus... Lions with teeth and fur strong enough to shatter steel, herds of beasts whose very breath permeates death, and insects capable of tearing a grown dwarf in half with their bare claws. While those beastfolk insist on calling it Qliphoth, it goes by another name with good reason throughout the rest of the south; the Black Westlands.”

Qliphoth, also known by the name of Black Westlands, is a large plateau region located at the far west of the Tropical Lands of Koldenwelt. A cursed wasteland, ridden with venomous plants and hostile beasts, it famously serves as the homeland of the Oevrumine people and seat of their unified nation, the Throne of Qliphoth. A place where only the strongest can survive, Qliphoth's current state is attributed to the birth of Xitannoth, one of the divine Colossi of the world, a thousand years before the beginning of the New Age.

Qliphoth was not always a pestilent wasteland. During ancient times, primitive tribes of Oevrumine minotaurs, Khalmartia lamias and gnolls called the region home, with it being far more resembling to the rest of the Tropical Lands. The ancient wars against demonkind did affect the region, however, with it suffering extensive damage from armies battling the servants of the Simulacra which led parts of the landscape to be infested with dark magics, which either mutated the wildlife or outright made the environment inhospitable. The races of Qlithoth, however, were hardy enough to survive and thrive on their homeland.

The end of the Adamantine Age marked the rise of the first Khalmartia Empire, who sought to unify and enslave the Oevrumine into regiments and legions to be used as their own army, in order to expand their influence and territory eastward into the rest of the tropics. However, the minotaurs, realizing their strength and capabilities, rebelled against the Khalmartia and crushed their empire, nearly terminating their people with the few survivors fleeing north to the Western Forests, where they would become vassals of the Sovereignty of Dryada. With the Khalmartia defeated, the Oevrumine became free to rule the old Qliphoth as they saw fit, forming their own sets of kingdoms across the land. However, their militaristic and aggressive culture eventually led them to break into in-fighting amongst one another, fragmenting their race and weakening their influence. Dwarves, descending from the ancient Dweorg, would also settle in the region, eventually growing distant from the Khargrim Greatholds.

At around 1,000 BNA, Mount Mynas, the volcano located at the center of Qliphoth, violently erupted as Xitannoth, the God of Pestilence, was birthed from the earth, the smoke from the volcano taking the form of the first Great Poison Dragons and spreading across the land, causing the very ground to become infused with the Colossus' sheer venomous aura. Unparalleled damage was dealt to Qliphoth as Xitannoth cursed the Oevrumine with a 'fertility plague', with healthy minotaur infants growing increasingly uncommon while the plants and animals which were not wiped out mutated, growing monstrous and dangerous in order to survive the now almost inhospitable wasteland.

Qliphoth is a plateau centered around the active volcano of Mount Mynas. Much of the land around the volcano is dry and dead, completely devoid of plant matter, though tropical jungles begin emerging into view as one travels to the outskirts of the region. Qliphoth's jungles are not like those of the rest of the Tropical Lands, as only the deadliest and strongest flora can survive and thrive; trees give poisonous fruit and are filled with jagged spikes and constricting vines, flowers spout paralyzing pollen and some plants are carnivorous and animated, evolved to kill and feed on the beasts which prowl the land.

Qliphoth is one of the coldest regions of the Tropical Lands, with an average temperature of 10°C to 12°C, this being attributed to Xitannoth's cursed birth. Despite its cold weather, rain is very common in the region, though it grows acidic as one approached Mount Mynas, to such a degree that architecture is warped and requires constant repair. Through its history, Qliphoth was also a frequent target of meteors, making it very rich in cold iron - which very likely influenced the Oevrumine's anti-magical nature.

The wild creatures which inhabit Qliphoth are among the fiercest of the Tropical Lands. By far the most known are the Poison Dragons and their smaller Venom Drake counterparts, who inhabit the entirely of the region, while other beasts include the catoblepas, a large poisonous cross of wildebeest and boar who is used as livestock by the Oevrumine, and the Qliphotian lions, distinct by their golden fur which is impervious to anything weaker than steel. The apex predators of Qliphoth, discounting the dragons, are the Myrmidons - monstrous, massive and incredibly strong insects, with claws large enough to rend an Oevrumine to pieces, their kind is respected and feared by the inhabitants of the land, and only the bravest and most powerful of warriors even consider the idea of fighting - or riding - them.

Oevrumine
Most known as Minotaurs, the Oevrumine rule over Qliphoth and are known for their great strength, martial culture and anti-magical properties. 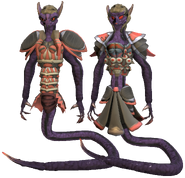 Khalmartia
A race of poisonous lamias, the Khalmartia were the first rulers of Qliphoth, until they were defeated by their Oevrumine slaves and nearly driven to extinction.

Gnolls
The hyena-like gnolls are widely believed to hail from Qliphoth, with many of them fleeing the region upon Mount Mynas' eruption and spreading across the continent. 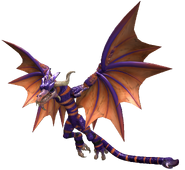 Poison Drakes
The True Dragons of poison and pestilence, the Poison Drakes were created by Xitannoth during his birth. Having not yet mastered speech, they are little more than wild beasts. 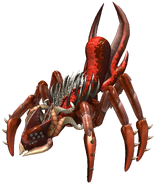 Myrmidons
Immense insectoid monsters, the Myrmidons are feared and respected by the people of Qliphoth. Their razor-sharp claws can tear through Oevrumine bone, and the largest of their kind rival Poison Drakes in bulk.

“I remember the people of Qliphoth during my years patrolling beyond the Imperium's influence. We were impressed by their strength and fortitude, and to be of such stubbornness to refuse our counsel was both one of disdain and interest. It is not the same land I remember; in fact, it is among the most changed places of the world.”

“I went through Qliphoth a few times. The people are strong and the creatures are even stronger. If you want to truly test your mettle, then take a blade and survive in that wasteland for a few weeks.”