N/A
“You go to Hyperion when you want to feel the thrill of hunt and combat to its core. Or if you're suicidal.”

Hyperion Island is an island located at the Tropical Lands of Koldenwelt, famed for its giant wildlife.

Originally a mundane piece of land in the southern ocean, Hyperion Island was blessed by Eostraeya at the beginning of the Old Age, when she planted the seed which would grow into the World Tree known as Laidar the One-Eyed. Many of her Seedlings of Life migrated from the Garden of the Gods into Hyperion where they settled and were altered by the magics of the mortal world, transforming into the fae race known as Mikmik over the centuries. The great power of Laidar the One-Eyed made the island bloom with life, with great landscapes filled with all kinds of flora and fauna being birthed from his magic, and a great number of Poison Drakes would settle in the island after being attracted to the World Tree's energies, becoming permanent residents.

During the New Age, the Mikmik opened Hyperion as a hunting hub for the rest of the world, with individuals from all sorts of races coming to the island for the purpose of hunting the great beasts which live in it. The Merkan would attempt to sacrifice the entirety of the island to Zhmagaralahtius using the demonic Petroatragal as their vanguard, but their efforts were foiled by the efforts of Filonan Aerember, Khadya and Saranhreia.

Hyperion is located at the Tropical Lands, at north of Khrokar Island and Sprak Island, being closer to the mainland than the former two. The weather on the island is mostly tropical though there are different areas and temperatures in different regions of the island. The island is geologically active and a large volcano named Mount Migeharverus dominates the west, with the area around it being a lava-filled wasteland known as Blagun. The south of the island, known as Faris, is unusually cold and actually snows and forms ice during most of the year, likely out of magical influence of the Mikmik.

The center of the island is named Theohelm and is composed mainly of very dense tropical vegetation and plateaus, as well as swamps. At the island's east are the grasslands of Vespasian, composed mostly of plains and rivers, and between the east and the north is the cave region of Diodoros, which extends to kilometers underground and houses gigantic formations of precious metals such as gold, silver and iron, as well as large concentrations of crystals.

The Hub of Olimarius is the city of the Blue Mikmik and the city where hunters looking for a time in the island must arrive to in order to access the rest of Hyperion. Located at the shores of Theohelm, it serves as the residence of the Blue Mikmik, as a trading center and a port. Due to the welcoming nature of the Blue Mikmik, other colours of fairies are allowed in the city as long as they behave accordingly. The warriors of the blue fairies and their Vorlora matriarchs are often enough to defend it from the giant beasts that call Hyperion home, but stories of Olimarius Hub being attacked by particularly rare and powerful creatures are not unheard of. 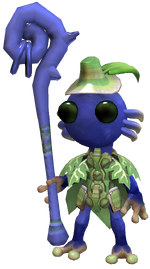 “Go on, chop-chop! Those tails won't get themselves!”

Louihar is the chieftain and current leader of the Blue Mikmik. Leading Olimarius Hub for 60 years, Louihar is an enthusiast who enjoys watching hunters gather tails for his people. Being a blue-coloured Mikmik, Louihar is quite nimble and possesses hydromantic powers, though he is clearly lazy and prefers to keep sending foreign hunters instead of his own people to fight the giant creatures of the island.

“Makes you wonder how a bunch of fairies managed to live there for so long, what with all the death and all.”

“I wonder if the women are nice and tall like the wildlife!”