The Everwinter Highlands are a mountainous region which makes up a significant portion of the southwest of Koldenwelt's Western Forests. Predominantly alpine in characteristics, the Highlands are largely mysterious and unexplored due to their cold temperature and terrain which is widely considered difficult to navigate.

The oldest recorded beings to inhabit the Everwinter Highlands were the Lightning Drakes, who were said to live upon the tallest peaks of the region ever since the ancient Lightning Colossus Relanvadur walked the earth. Other than them, the region was largely uninhabited for most of Koldenwelt's history by civilizations; the Orocathi Domain of the native Draonoggr were the first great nation to arise in the region, at around 7,500 BNA.

While not native to the area, other civilizations of the west such as the Sovereignty of Dryada have ventured into the Everwinter Highlands for the purpose of gathering resources, for the region was quickly found to be very rich in ore, gemstones and others. At around 1,000 BNA, the Colossus of Poison Xitannoth arrived to the region and dug his way inside one of the peaks, turning it into a lair for himself which was discovered by the band of the Goldhawks, led by elf ranger Daithelen Kevlamir, at 25 BNA.

The Everwinter Highlands range from the southwestern border of the Western Forests with the Tropical Lands to several thousand kilometers north. Unlike the rest of the region, which possesses a predominantly temperate climate, the Everwinter Highlands have a distinct alpine cold which is present through the entire year - the area being named for it, as to outsiders, the Highlands appear to be locked in a cold, harsh winter. The highest temperatures at summer do not go beyond 12ºC, while the actual winter season can go as cold as -15ºC.

Most of the highest peaks of the Everwinter Highlands are covered in frost while others are volcanoes, some which are active, though a number appear to be completely dormant - regardless, eruptions in the area are considered uncommon and do not tend to cause much turmoil outside of the Highlands, but the races living underground find great value in the heat provided by the magma. The area solidifies itself as part of the Western Forests for, despite the great altitudes, a significant amount of woodland is present through it, predominantly at the base of the mountains.

Animals found at the Everwinter Highlands include a number of rabbits and hares as well as alpacas and llamas, which have been domesticated by a number of civilizations in the continent. Mountain goats, yaks, ibexes and gelada monkeys can be found through the woods and cliffs of the taller parts of the Highlands, as well as predators such as cougars and snow leopards.

Lightning Drakes
The primordial True Dragons of electromancy, the Lightning Drakes have inhabited the Everwinter Highlands for most of Koldenwelt's history, from where they keep vigil over the Western Forests. 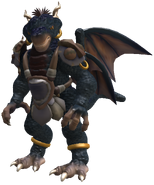 Mountain Draonoggr
The Draokorumnoggr are situated at subterranean cavern systems beneath the Everwinter Highlands, where they call the Orocathi Domain home.

The Everwinter Highlands in the world map