“The deepest and farthest corners of this world are home to presences both ancient and mysterious. In the case of the most northwestern reaches of this mortal plane, it is home to those who dwell in a vast and ancient underwater kingdom. Those who travel there lay their eyes upon the Orayu; perhaps the most peculiar of these dwellers.”

The Bay of the Orayu is the most north western reach of planet Koldenwelt, home and dominion to the race known as the Orayu.

Due to the sparse information collected on the Orayu, it is not known exactly for how long they have settled in neither the underwater reaches of the bay nor the coastlines around it. The earliest traces of the Orayu are in the existence of the Dawn Warden known as Maras, living six thousand years before the New Age's beginning. There have been attempts to date ancient findings on the Orayu culture, though since vast sums of Koldenweltian Orichalcum and Adamantine Age history has been recollected from the Orichalcum Elf Imperium, little has come of finding deeper levels of history before the Orichalcum Elves' documentations on Maras around 6000 BNA.

The first of the ancient Dalmiric Kingdom historical records between 6000 - 4000 BNA indicate that the Orayu and the area surrounding them are among the more ancient kingdoms in history, perhaps dating back to the times of Emperor Keleivel in the 28,000s BNA - Keleivel is known to have had reservations of conquering the north of Koldenwelt (though this may be more likely owed to the Septentrions instead of the Orayu). Maras' power over aetheromancy suggests that the Orayu were in communication with the Storm Drakes or even the Echdrarothrayu, which would firmly date their settlement in the bay at least 25,000 years ago.

A bay of approximately two thousand miles of coast, the Bay of the Orayu in itself is known to be one of the most north western dominions on Koldenwelt altogether. Due to the subarctic and tundra climates that exist in north western Talmyr, the bay has sparse inhabitation of wildlife and civilian life and there are no roads that lead to the settlements on the bay's coast, leaving it one of the most isolated regions on Koldenwelt's surface. A majority of the Orayu Kingdom's territory is within the bay's underwater terrain, leaving access to their underwater cities impossible to all but those who can breathe underwater. The southern end of the bay is adjacent to a mountain range of which has several active volcanoes,

Perhaps one of the oldest surviving Koldenweltian cities still remaining, Teuqualasvaluk is the capital of the Orayu Kingdom and is the largest underwater city of the Kingdom's territories. The seat of power in the kingdom, Teuqualasvaluk's waters above ground is exceptionally dangerous to tread - naval vehicles sailing over the central waters of the Bay of the Orayu have an ominous tendency to go missing. This is usually an assault of the Orayu's making, pulling these vessels underwater by creating tremendous whirlpools using hydromancy. For outsiders, Teuqualasvaluk is thus strictly forbidden.

Many believe that, if the theories of the Orayu living during the time of the Phoenixes are true, then Teuqualasvaluk is one of the oldest cities on Koldenwelt, being established nearly thirty thousand years ago. No outsider to the Orayu Kingdom has ever seen Teuqualasvaluk, though descriptions from Orayu have described it as a vast network of immense pyramids that stretch hundreds of feet high. 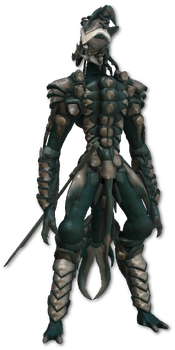 The native inhabitants of the Bay of the Orayu, the Orayu race is one of the more enigmatic races to inhabit Koldenwelt. With only a handful of individuals who have travelled east to the rest of the world, much of the Orayu's culture and their very biology remains unknown to Koldenweltians who take interest in them. A highly distinguishable species, Orayu are a very tall, almost gigantic fish-like kind that are very rarely seen anywhere west of the Dalmiric Kingdom. They are known for their advanced skill in crafts, such as their intricate and protective armour.

From only a small degree of examples, Orayu are known to be very powerful sorcerers, with enormous capabilities in hydromancy, cryomancy, geomancy, electromancy and even aetheromancy.

“It seems that much of the ancient north of the world appears to be very similar. Perhaps the work of the Echdrarothrayu.”

“The Orayu and their lands prove an enigma to us ever further, their great cities forbidden to the eyes of us outsiders. Mayhaps humanity shall yet see the works of the Ancient Ones with their own eyes, but I hold little hope for such in my short and heated blink of a lifetime.”