Ar-Klith Sky Empire
“In its long and glorious history Ar-Klith has been called by many names: the Angel Mountains by the kobolds of yore, the Land of Salvation by the Dragonlings that rule over it today, the Grey Spires by the race of Khar, the Forge of the World by the Deiwos nations. Such is the nature of this strange and ancient place: it always changes, shifting form like the candent iron it is so abundant with. Yet one name for Ar-Klith has always remained the same throughout all the eons, immutable: the Land of Wonders. Do not let the fire of furnaces and the roar of steam engines fool you and make you believe the mountains have been tamed. Ar-Klith's wild magic, as old as Koldenwelt itself, still lives on, and no force in the world, be it magic or machine, shall ever be able to conquer it.”

To the north from the desolate Abyssus, to the east from the Great Desert and to the south of the domains of men and elves lies Ar-Klith (from Eorthisc Arclifas, meaning Angel Mountains), one of the largest and most ancient mountain ridges on Koldenwelt. Currently home to the ingenious Klaxxa who migrated there thousands of years ago, it is known today as the heart of the world's industry, technology and science, bristling with alchemical laboratories, foundries churning out one mechanical wonder after another, and mighty forges whose smoke reaches to the alpine sky. In direct proximity to Koldenwelt's focal points of commerce and abundant with minerals and metals, Ar-Klith is one of the richest and most prosperous regions of Koldenwelt.

But there is much more to the ancient mountains than just factories and furnaces. While considered to be the dominant force in the region, the Klaxxa and their Sky Empire are hardly the only race that calls Ar-Klith home, nor were they the first one to do so; outside their illustrious cities of iron and stone, eldritch magic rules, more ancient than even the lordly kobolds, and strange, terrible things from beyond the mortal plane walk at night. Strangers who trespass through the Forge of the Koldenwelt should be wary, for the Sky Empire's prideful claim over it is tenuous at best; in truth, Ar-Klith has been, is and always will be its own master.

It is believed by Koldenwelti scholars that Ar-Klith's first inhabitants were the Ordnung (also known as Ae), a beastman species which had allegedly created numerous cromlechs and other monuments which are now found in the mountain ridge. Expanding through the misty mountain ridge, the Ordnung had eventually created a vast, if somewhat primitive, civilisation, built on iron discipline and totalitarian rule. Statues of Ordnung origin, depicting their god-kings, still remain to the present day, inspiring fear and awe to the modern generations just as they did millenia ago.

However, Ordnung weren't the only inhabitants of the ancient Ar-Klith Mountains, for many species, sentient or insentient, were enslaved to their dark will. Among those creatures were the ancient Klaxxa, who came to Ar-Klith from Korodis, fleeing from the demonic Shiarchon, only to be enslaved. What happened next is unknown, for Dragonlings aren't known for being good historians, but somehow, Klaxxa toppled their masters' rule, driving them near-extinct, and claimed the mountains for themselves.

For the following centuries, the Klaxxa were expanding their domain, exploring Ar-Klith's depths in search of precious metals and minerals. During the War for the Eye, Ar-Klith was attacked by the Shiarchon, who devastated the mountain ridge greatly, but in the aftermath, Klaxxa managed to rebuild their home and make it greater than ever.

Now, Ar-Klith is the capital of the grand Ar-Klith Sky Empire, inhabited by thousands of Klaxxa (and other creatures); every day, hundreds of zeppelins bring the rarest riches known to Koldenweltians to it, returning with wonders of technology created by Klaxxa craftsmen. However, the region is still far from peaceful, for many races of Ar-Klith discontent with Klaxxa rule still wage war against them. There are also rumours, told from miner to miner, that in the depths of the mountain ridge there are still Ordnung, who now want to reclaim their ancestral homeland...

Ar-Klith is a massive mountain ridge forming a ring. Outer Reaches, territories located around this "ring", are temperate and vegetated. There, Klaxxa farmers and peasants live, selling wood, crops and meat to their underground brethren. Deeper, in the Inner Reaches, landscape becomes charred and desolate. Such a deadly place is inhabited by warlike Kharindalё, who see it as a best place to weed out the weak, as well as Klaxxa miners. Underneath the Inner Reaches, there is a massive system of caves and tunnels called the Ar-Klith Deeps, the heart of Klaxxa civilization.

Ar-Klith climate is generally temperate yet somewhat desolate, as constant fumes from volcanoes make Ar-Klith hard to support large amounts of plantlife. Because of constant volcanic activity, Ar-Klith is also a quite hot places, and its inhabitants have adapted to this; while the temprrstures in it never reach the extremes of Abyssus, Ar-Klith can still make unadapted species like Men feel uncomfortable.

Arkenholdt is the largest Klaxxa settlement in the whole Koldenwelt. A bustling metropolis with baroque, innovative architecture, it is a centre of industry and technology, shrouded by black smog created by its many factories. Because of this smog, Arkenholdt is often called "the City of Smoke".

Arkenholdt has two large districts: the surface district, which houses the majority of the population, and the underground industrial district. While large, Arkenholdt is still relatively small compared to cities of other species such as Enthopea of the Tragnon Kingdom. The reason for this is the fact that Klaxxa society is somewhat decentralised, and while Arkenholdt is the greatest Klaxxa city, it is merely the first among peers. Neverthless, it is still a capital and a residence of the current Lord Protector, Arken-Lak.

Although relatively small, Klaxland is widely considered to be one of the most important places in the Ar-Klith Sky Empire, for two reasons. First, Klaxland was one of the settlements that were founded when Klaxxa migrated from Korodis, making it one of the oldest Klaxxa cities in Ar-Klith. Second, Klaxland served as the military center of the Ar-Klith Sky Empire during the War for the Eye, being a site of multiple battles against the Shiarchon. The greatest general of the Klaxxa people, Rekan-Lax, also came from there.

Klaxlandian Klaxxa are generally seen as cosmopolitan, proud and somewhat hot-blooded. They also enjoy simple, peaceful life much more than their tech-savvy brethren, and Klaxland is far less advanced than Arkenholdt. Kharindale and G'Shak visit this city fairly often.

Hal'zhakh is the capital of the Kharindale, a tribe of militarist elves who were exiled by their comrades millenia ago. Located atop a massive volcano, its environment is extremely deadly and can kill an unprepared trespasser with ease. Hal'zhakh's denizens, however, do not care, for they believe that their strength should always be put to a test, lest they grow weak and cowardly.

Hal'zhakh is composed of several districts each living on its own, ruled by noble clans vying for dominance. Citizen of Halzhaklazaa are taught to fight from childhood; becaude of this, they are widely considered to be the best fighters in the Ar-Klith Mountains. Klaxxa fear Halzhaklazaa and rarely ever visit it; those who do are often killed by Kharindale warriors who despise dragonlings for being weak. 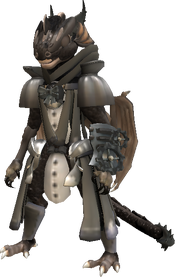 “May our empire prosper.”

The Klaxxa are a Kelodhros race from Abyssus, known for their affinity for technology. Small and frail with little magical affinity, the Klaxxa have neverthless managed to become the most prominent race of Ar-Klith through intelligence, inventiveness, and tenacity. Crafty, eccentric, sometimes even insane, the Klaxxa have built a mighty empire by harnessing the power of steam and gunpowder, its mighty cities connected by zeppelins and airships.

The Klaxxa's Kelodhros kin often look down at their smaller brethren (both metaphorically and literally), refusing to see them as equals or even relatives at all. But the Dragonlings don't care, for they have but one ultimate goal: new discoveries, new inventions, new machines.

Distant relatives of the Urindalё of the Northern Regions, the grey-skinned Kharindalё are quite unlike their elven kin. While other western Deiwos are peaceful, wise, and cultured, Kharindale are violent, merciless, and militaristic; all their life revolves around battle, from childhood (when they fight their siblings as a form of entertainment) to death (usually in combat). Kharindale mercenaries are considered to be among the finest warriors in Ar-Klith and beyond.

Although the Kharindale helped the Klaxxa during the War for the Eye against the diabolical Shiarchon, they still refuse to accept their rule over Ar-Klith, deeming the small Kelodhros unworthy of such a title. As such, the two races dislike each other greatly. 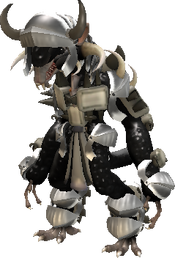 “We géanhwurfon ond we ábræcon. (We return, and we conquer.)”

The most enigmatic race of Ar-Klith, the lordly Ordnung were once a grand race which had reigned over the entire mountain chain. Extremely disciplined, deceitful and utterly merciless, their innumerable legions once conquered entire civilisations in the name of their god-king, Goldemar. Overzealous in their goal to maintain order in their realm, they exterminated anyone who would dare to question their will - Ordnung and non-Ordnung alike. Fortunately for the rest of the world, Ordnung rule was ultimately put to an end when their Klaxxa slaves rebelled against their masters, driving them near-extinct.

There are rumours, however, that some Ordnung have managed to survive the fall of their mighty empire by hiding in the deepest caverns underneath Ar-Klith, beyond the reach of Klaxxa miners. If so, the Klaxxa and indeed, all Koldenwelti species should prepare for the arrival of their true masters.

“Our true and only homeland. All hail Ar-Klith!”

“We shall return! Return!”

“We shall have the "crown of Koldenwelt" shattered and left broken!”

“There's nothing bt short dragons, short goblins and short Smeevers in there. Everyone is short!”

- Nosfer of the Nightshade Clan