Karzhamarhi-Nui, a large planet located within the capital region of the Ramboidea Realm of the former glorious and noble Rambo Nation. Located along the Ramsoria Run Trade route and near the fearsome Metruia Nebula. The green/blue colony is known for her peace, silence and wisdom and is the seat of House Ramelzen. The colony is also well known for her hospitality and tolerance for other species and cultures.

Karzhamarhi-Nui is a planet of variety in geography. From deserts to hot forests and rain woods to the icy colds of the mountains and polar lands it gives Karzhamarhi-Nui a perfect world to live in, with fertile lands and an interessting yet dangerous wildlife. Most of the cities are located in the main continent, located close to one another. Most cities are peaceful and are located near water, with its capital Ga-Laiquendi as its main seat of peace and serenity. Karzhamarhi-Nui can be said to be an utopian paradise with a warm climate and gentle and tolerant culture.

The blue rings surrounding the planet is filled with rocks and blocks of ice, often provinding cover for criminals whom wish to escape Ramboidae patrols and houses various mining facilities of the Creckel aligned Crecktain Mining Guild. Though it must be said, there is little criminality on Karzhamarhi-Nui compared to other planets as it is considered one of the safest planets within the Ramboidae Realm.

The planet was colonized in 2673 (125 BQF) in name of Rambo Nation by the Rambo Serindia. Over the years it became one of the more wealthier colonies, yet often escaped attention of cooperations and criminals due to her peaceful nature and close proximity to the Metruia Nebula. Peaceful settlements and cities were constructed, signaling the utopian dream of the Serindia and their striving for wisdom and peace.

During the Second Galactic War in 2798 (0 BQF) the colony was spared from conflict. During the Great Cyrannus War in 2802 (04 AQF) Karzhamarhi-Nui suffered a Confederate invasion by Lizaconda. For over a year the planet was occupied by the Confederates and suffered at least three major battles, including Third Battle of Karzamahri Nui|one involving sergeant Claire Rambo and the destruction of a Suiliagothrond Battlestation. The aid of the Cognatus Remnant proved instrumental in the liberation of the planet and the citizens celebrated their independance again and began rebuilding the intensive damage done by the battle. Cities lost during the occupation and battles included Arthrastral and Laioro. When Rambo Nation fell under the Protectrate of the Galactic Empire of Cyrannus, Karzhamarhi-Nui became one of the silent supporters of the Empire as the Imperials aided in the rebuilding of the planet. Public opinion and Imperial support wavered when House Ramelzen assumed leadership over the planet in 2812 (14 AQF). By 2820 (21 AQF) the planet thrived and prospered but all non-Serindia species were removed from the planet by Mandator Camron Dar and the execution of his Contingency Plan.

An attempt to liberate the planet was made by the Rambo Loyalist in early August 2820, however the Imperials defeated the Loyalist forces and managed to destroy an Acclamator-class. By September 2820, the Singularim Pact besieged the planet in an effort to defeat the Imperial/Legatus forces at the planet, with a focus point of battle at the North Pole. Lord Psantik himself fought during the battle, directing his fleet to intercept any reinforcements. As the Legatus fiercely protected its base, a full clash between Legatus walker and Singularim troops broke out at the forzen plains. After three days of battle, and the loss of the ICS Artemis the Singularim achieved a hard fought victory and the Legatus forces evacuated the system, Karzhamarhi-Nui was liberated.

Ga-Laiquendi, the capital city of Karzhamahri-Nui and the center of wisdom, peace and knowledge of the Ramboidae Realm. Located in a bay in the western lands, it blue waters provide the calm and warm climate, in summer reaching 28 celcius degrees or higher. Known for her white stone walls to protect the city, the many bridges across the city and pools make it famous and highly wanted for visit by tourists. Walking through the city is a magnificent sight, with houses which are only for the elite, Ga-Laiquendi is the richest city on Karzhamarhi-Nui.

Over time, and under rule of House Ramelzen the city continued to prosper and expand, it massive protective wall houses the port for the defensive fleet and is decorated with the sigil of House Ramelzen. The centrum of the city features a highly decorated and famous Serindia Bank and Vaults. At the outskirts of the city a ruined part, remnant of the Confederate occupation is closed for visit as a dragon now watches over the city from the ruins.

Watching over the city lies the seat of House Ramelzen, which can only be entered by using the docking port.

Besides the protection of the fleet, the city is guarded and protected by the Tirithian Guard. 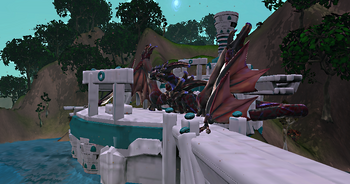 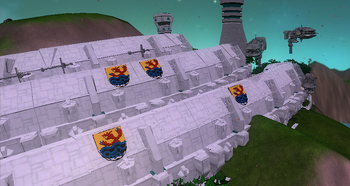 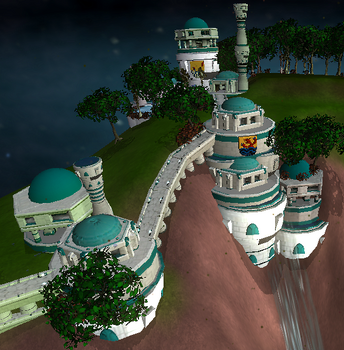 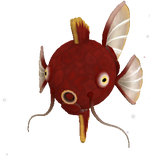 Fishkarps are fish like water type Scions with little to no abilities, they are known to use bubble when trained and can splash around, but further more they seem unalbe to use attacks. Most trainers who want a fishkarp take them for their swimming abilities and speeds they have, wich some use at a tackle. Though not very populair among trainers and summoners to have as a Scion, they are exquisitely fine on a plate with various ingredients like spice and vegtables. Though native to Rambo Prime the Fishkarp were introduced at Karzhamarhi-Nui and managed to thrive in the seas and oceans.

Karzamahri dogs are scale boned creatures. Though looking fierce and powerful, these creatures are actually kind friendly and gentle. Easily trained and kept as pets, the dogs are bred for people both at Karzamarhi-Nui and beyond. The dogs have strong senses, a keen nose and a fierce loyalty to it's master. Though by nature not aggressive, when mistreated the Karzamarhi dogs are known to attack and harm others. Their blue coloration glows in the dark, giving the creatures something mysterious. They have an average height of 80 cm to 1 meter. 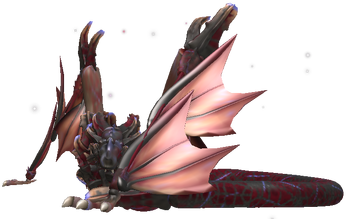 The Karzamarhi Dragons are a dangerous and large breed of creatures. Easily measering over 11 meters in size, these agressive and strong creatures can cause havoc upon cities or unaware tresspassers. However, the dragons are rather shy creatures, hunting only at nights in the desolate wastelands. Some are known to take home in ancient castles or caves, guarding their plunder of gold and other prizes. Left undisturbed, the dragons are a rare sight, though when disturbed the creatures can go rampage and threaten even cities!

The grey/red colered dragon/serpents can fly long distances in little time due to their strong and large wings. Though known as dragons, the Karzamarhi-Nui dragons cannot breathe fire, instead they use their wings to create strong wind currents or their strong roar to blow away they deem not worthy to shred to pieces with their sharp theeths.

Though not facing extinction, the dragons have difficulties breeding and people believe that only 50 are still in excistance at Karzamarhi-Nui. Sadly there are parties who hunt down these creatures illegally, capturing them to let them fight in arena's for sports. Some believe the dragons can phase between realities as well, though scientist claims those are just myths.

The Karzamarhi Rock Frogs are silly looking creatures, small in size they are often found near rocks, biting and eating from rocks. Though small, these creatures can become a reall annoyance in large numbers when they consider your home made of stones their rock on the menu. As such, the rock frogs are monitored though found all over Karzamarhi Nui. When in large numbers they often make a lot of sound to warn of attackers. They have an average size of 10 till 40 cm.

Many fear that due to intergalactic travel these creatures will appear at other places as well. 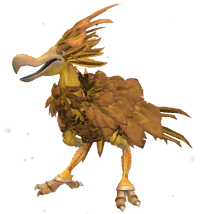 The Quadrantia Chocobo are mysterious creatures, believed to have hailed from an other reality. Upon Karzamarhi-Nui the Chocobo settled themselves at the grass plains, in flocks they move around the plains seeking food and water. Chocobo's are by nature gentle and sweet creatures, though when irritated or having youngs they are known to attack people and other creatures. With a lot of patience, people are known to be able to tame these majestic creatures, developing a close bond with them ensures you with a loyal and strong pet.

They have an average size of 2 till 2.5 meters. Due to intergalactic travel it is common to find trained ones at other planets as well, wild QChocobo only live at Karzamarhi-Nui.