Rambo Nation
Jatooine is a desert world located in the Quadrant Galaxies, within the borders of the Rambo Nation Outer Colonial Sector. Stronghold for the Ortella who call Rambo Nation their home, the planet is rich on minerals and is often seen as a trade port as well as a tourism spot for its unique and narrow streets, offering a medieval feel. Most famous however is the imposing Prière Église, also known as the Cathedral of Light.

Due to ancient and magical portals, various Amiaeria wound up at Jatooine as early of 1250 BQF. Stumbling upon the site, the Amiaeria began constructing their city and fortress around the mountain hills, located near the largest water source.

The native Zarbriaek, nomads by nature soon met the Amiaeria and began trading with them. For years the two species lived in harmony and peace, though caravans were often attacked by both parties and made relations tense.

When the Amiaeria space ships arrived at Jatooine around 250 BQF, most of the Amiaeria joined their kin and abandoned the planet. Ortella refugees arrived around this time as well and the leaving Amiaeria handed over the planet to the Ortella, who placed it under the rule of the noble House Stefani. Ever since, the Ortella and Zarbriaek have been on trading terms, the Ortella raised a massive cathedral and saw it as a place of Light.

Spared during the destructive Second Galactic War in 0 BQF, the Ortella approached Rambo Nation for protection. Under diplomatic efforts of Rambert Ramveral, Jatooine signed the Treaty of Fornaeria in 02 AQF. Since the joining into the Rambo Nation Society, the planet enjoys the protection of Rambo Command though also saw an increase of the black market, something that was already thriving on Jatooine before its joining and often a thorn in the eye for the Government of Rambo Nation. Most smuggling of illegal alcohol and drugs run through the black markets on Jatooine, something the local authorities have difficulties tracking and stopping.

In february 19 AQF, the planet became involved in the so called Jatooine Incident, an event in the Tertius Bellum. A failed diplomatic meeting with the Lizardian turned into a disaster after a coupe attempt by Marscalcus Kya.

Bastille Le Jatooine, otherwise known as Jatooine is the largest city found at the entire planet. Famous for the imposing Prière Église, the Cathedral of Light the fortress city is also known for its notorious black markets, the friendly Ortella inhabitants and the nomadic Zarbriaek. The lower city is constructed in a natural valley, where the narrow streets and building style give it a unique medieval feel. Following the outer walls of the city, the two mountain hills are housing the Prière Église and the upper fortification, seat of House Stefani. Outside the city, on the main road a Watch Post is located, inspecting all goods, commerce and persons entering the city. The post is manned by Ortella Guards, clad in the yellow and blue armor and loyal to House Stefani.

Various settlements, farms and ruins of houses can be found in the vicinity of the city as well, often the target of inspection by the guards as they can house criminals associated with the black market or the Syndicate. 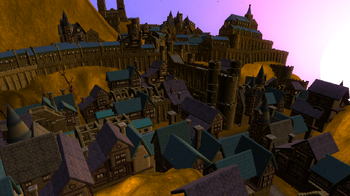 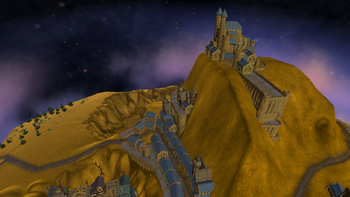 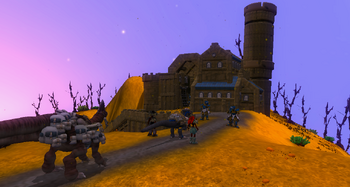 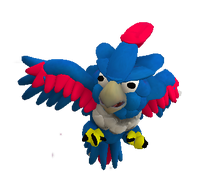 Archtalon are small blue/pink colored flying Scions found at Jatooine. Picky, annoying and often seen stealing food many within the city and beyond find these Scions a pest. They are difficult to train and tame. Their feathers however are a prized item and though House Stefani outlawed hunting on these agile and fast birds, on the black market their feathers bring up a great prize. 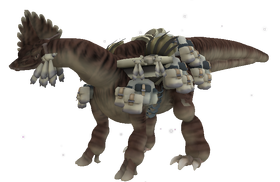 The Jatrosaurien are distant relatives of the Veldrosauriens found at Impaerusqiantia and the Iguanbrian of Umbrax. These herbivore grass eaters are friendly and gentle in nature, though can swing their tail with deadly consequences. The Jatrosaurien are the preffered mounts and used for caddle. The nomadic Zarbriaek treat the animals with great respect and take great care of them, as the animals transport commerce and goods into the deserts under their guidance. If a Jatrosaurien is treated badly, it leaves their handlers, as such the Zarbriaek take great care of them. 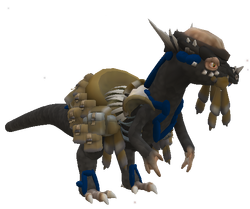 The Pachydos are small bipedal cross-breed of dinosaurs and Scions. Able to call upon the powers of rocks if they desire, they rather settle differances with their heads, inforced with bone. The natives of Jatooine use the creatures as mount, though know to treat the animals with dire respect less face their wrath of their heads. They are quick and agile, build to endure long walks throughout the enless deserts of Jatooine.

The Png files require the Dark Injection and CamBen Colorpack