SporeWiki
Register
Don't have an account?
Sign In
Advertisement
in: Articles under construction, Planets, Illustrated terrain, Planets with moons

“yeh I kno dat place. wait wat place? groodrub? neva heard of it. oh yeh i fink i rememba. dats our home planet? ya chattin rubbish. our home planet... is... uh... I forgot”

Groodrub is the origin of the Loron, although they don't remember it.

The planet became the home world for it's most intelligent beings, the Norol, or Da Loron Chikz. It had a very tough environment, and, since the Norol where arachnids they needed someone else. What they evolved was a unique way to create a creature's egg without needing a mate.So, thus they became very large. There were masses of threats from Epics and strong creatures on the planet, and the planet was full of creatures killing each other, with blood spilled everywhere.

Until the Loron were born.

Everything changed; no creature was tough enough to match a Loron and, in just 150 years, not even an epic was. The whole planet trembled at the Loron, whereas the Norol were creating a civilization, thanks to the Loron's help. They eventually grew stronger and stronger, with more and more threats removed. Everyone was scared of them. There were very few intelligent beings, as these were all made into Loron slaves.

After the Loron evolved, more Loron left Groodrub. So, for this, it became once again a planet full of horrific creatures.

The planet was, at one stage, now more or less abandoned. It is still seen by the Loron as a random planet that is theirs, but it produces a lot for them. They still have no idea of it's history at all. When you ask for them to find out they will just yell "SHUT THA HELL UP GEEK" then eat you. Or something like that. The source comes from Taldar databanks.

In 2776, planet was discovered on one day when Da Propa Big Boss Zr'Ahgloth was hungry. Out of hunger, he checked out Groodrub. When he found Groodrub, he found a lot of wildlife, and plants to make Pizza from. The world became a popular planet for the Loron.

The planet was later colonized by the Unified Nation of Ottzello, and was a planet moved from the old Ottzello Galaxy to the Ottzello Sector in the Borealis Galaxy (originally in the Milky Way Galaxy, the Sector was relocated to Borealis). It became a wildlife reserve, a Loron home, and a Ioketa home, in which the Ioketa would visit on their training pilgrimages due to its harsh climate.

Groodrub exists in the Groodrub System, which contains 12 planets. Of these planets, however, 4 are gas giants, 3 are water-only planets, 4 are uninhabitable due to being too cold or too hot, but Groodrub is habitable.

Da Sunn, the sun of Groodrub, is an enormous star about twice the size of Da Sunn.

Groodrub has a diameter of 22,750km, and is the fourth planet from Da Sunn. The gravity of Groodrub is fairly low so that the Loron could say upright with their head.

It is a planet with a harsh environment, with a massive amount of land making up 45% of the planet. It is, overal, 2 degrees Celsius higher than planet Earth, and has a tropical climate. It contains several deserts, of which UNO are currently trying to transform into more rainforest. The planet is full mostly of rainforest/jungles, although the colder areas are either forest or cold climates. There are a few volcanoes on the world, and earthquakes aren't uncommon. 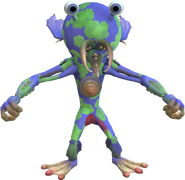 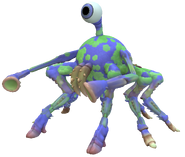 There are trillions of creatures on the planet and where species like the Loron appear as ants to the huge creatures that inhabit it, 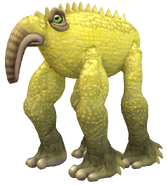 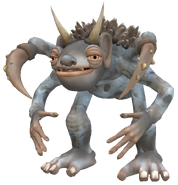 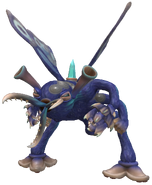 Kaiolger - A large armored predators often found in mountains and other tall places.

Moosyfroger - A tall and dangerous swamp dweller who pulls their victims into the water to devour them.
Community content is available under CC-BY-SA unless otherwise noted.
... more about "Groodrub"
RDF feed
Creator
Technobliterator +
Downloadable
yes +
Image
PlanetGroodrub.png +
Advertisement