“Concordia stands as a testament of the resolve of the Cyrandia Alliance. When Ramaprica fell to the vicious and barbaric Zillum, many of us had lost all hope that peace in the galaxy can be possible. We will rebuild and exceed the achievements of the past, with a weather eye on the horizon, one in which peace and diplomacy once again rules Cyrannus.”

- Senator Cadan Pailí during the initial colonisation of Concordia after the destruction of Ramaprica during the Great Cyrannus War.

Concordia is a planet in the Concord Sector of the Cyrannus Core Worlds first settled by Republic colonists fifteen years prior to the Great Cyrannus War. A temperate and cosmopolitan world, much of Concordia's surface consists of large cities embedded in large rainforests and separated by gleaming blue seas. While reasonable important in galactic politics since its colonisation, Concordia first came to the attention of the galaxy at large when the Cyrandia Alliance established its capital on the planet in 01 BNE when Ramaprica was destroyed by the Confederacy of Allied Systems.

After the war, the world fell under the grip of the Galactic Empire of Cyrannus, though slowly became a backwater world of little interest to the Imperial government, which considered the planet a neutral world. As such, it was chosen to host the Cyrandia Conference, during the New Cyrannian Republic was declared. Concordia would remain Imperial-affiliated for a further two years, when it fell victim to a vicious Cognatus attack carried out by the Blade of the Primercer. When the New Cyrandia Wars ended, Concordia was liberated by a joint Republic-Quadrantia task force. Such an act angered the Imperial Senate, exacerbating the Cyrannian Cold War.

Settled by colonists loyal to the United Republic of Cyrannus, Concordia quickly grew into a vibrant and cosmopolitan world the envy of its sector in the Core Worlds. Represented in the Galactic Senate of the Republic by Cadan Pailí, the planet grew quickly as an important trade center, but generally remained unimportant in galactic affairs. However, during the Great Cyrannus War, the planet was chosen to replace Ramaprica as the capital of the Cyrandia Alliance. It remained as such for the duration of the conflict, which ended with the fall of the Republic, the splintering of the Alliance and the rise of the Galactic Empire of Cyrannus.

Due to the connotations with the Cyrandia Alliance, regarded as traitors by the Imperial government, Concordia would be regarded as a backwater upon which extragalactic diplomats could be brought to discuss their nation's capitulation to the Empire. In 03 NE, the planet would play host to the Cyrandia Conference, where the Empire would permit the establishment of the New Cyrannian Republic by Proconsul Apollo.

Despite ostensibly being a neutral world, Concordia played host to an Imperial garrison during the New Cyrandia Wars in the event that the New Republic attempt to invade the planet. During the first year of the conflict, this garrison was overrun by the Cognatus Empire under the command of the dreaded Blade of the Primercer. Though the Imperials would continually attempt to reclaim the world, they would eventually abandon it when the conflict against the Cyrannian Imperial State became more desperate.

“A victory at Concordia would do much to provide stability to the region.”

When the New Cyrandia Wars ended, the New Cyrannian Republic finally turned their attention toward Concordia, which straddled the neutral zone between Republic and Imperial space. Senator Aneen Daerethal was the first to raise the issue of the Cognatus occupation to the Republic Senate, which agreed to pass a motion to claim the world from the Cognatus. Working together with the Unified Order of Cognalorilos and other members of the Lianna Initiative, a Republic flotilla led by Captain Onon Vebbar fought a pitched battle against the brutal Cognatus occupiers, driving them from the planet.

The months following the Concordian Liberation saw extensive reconstruction efforts by the Republic administration headed by Senator Sola Naberraé, who came to represent the planet in the Republic Senate. As the closest world to Imperial space, Concordia was provided with one of the largest Republic defense fleets in the galaxy, with the planet's government all too aware of the tension caused by the Republic liberating the planet rather than the Empire.

A vibrant, diverse and cosmopolitan planet, though Libertus constitute the largest majority on the planet, Concordia is home to species from across the Cyrandia Cluster. Indeed, due to the planet's history as the capital of the Cyrandia Alliance, Concordia is home to a large number of species native to the Quadrant Galaxies, most of whom migrated to the planet during the final year of the Great Cyrannus War. Though the planet suffered under the yoke of the Galactic Empire of Cyrannus and the Cognatus, under the New Republic, the people of Concordia prosper once more. The planet itself is also host to vast rainforests, home to a wide variety of animal life. 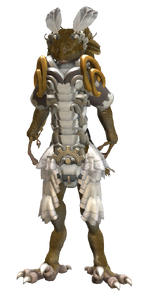 Sola Naberraé
Senator of ConcordiaSenator Sola Naberraé is a female Libertus famous for her role as the former President of the Cyrandia Alliance and her marriage to Willelmus Cretacea. Though one of the most powerful political figures of the Cyrannus Galaxy during the Great Cyrannus War, Naberrie managed to evade capture by the Galactic Empire of Cyrannus during the Dark Times and ultimately emerged yet again upon the creation of the New Cyrannian Republic in 03 NE. A force for peace, democracy and diplomacy, Naberrie is one of the most popular senators in the New Republic and is committed to bringing peace and prosperity to Concordia and the wider Republic. 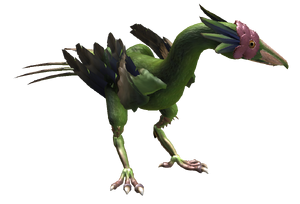 Lithoteryx
Bird
A species of large bird, the Lithoteryx often roost in coastal locations near a large body of water, utilising their sharp beaks to hunt for fish. The most common species of bird on the planet, Lithoteryx are closely related to maniraptoran theropods, which include sentient species such as the Libertus and the Fernei-Tuu, a fact seen in the presence of protofeathers and three clawed feet. 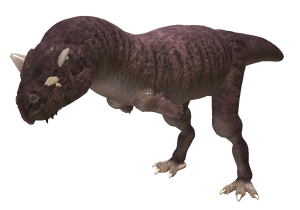 Sashrenosaurus
Theropod
The largest carnivore on the planet, Sashrenosaurus are feared even by the sentient natives of the planet despite the fact that instances of Sashrenosaurs attacking sentient beings have been consistantly low since the early years of the planet's colonisation. From this, scientists infer that these fourteen metre long predators prefer to avoid settlements. Sashrenosaurs have evolved with massive jaws to kill their prey, which has in turn resulted in tiny arms used only in mating rituals.

“The birthplace of the Cyrandia Alliance now falters under the flag of the Empire. It must be liberated.”

The Battle of the Concordian Nebula during the Neraida War

Retrieved from "https://spore.fandom.com/wiki/Planet:Concordia?oldid=811548"
Community content is available under CC-BY-SA unless otherwise noted.