City of the Ancients

Cognalorilos is a planet located in the Zelotes Sector of the Cyrannus Galaxy and the cradle world of the militaristic Cogsangui. Largely covered by vast, turbulent oceans and craggy arid continents, the harsh nature of their homeworld has largely informed the historical direction of the equally harsh natives. In the aftermath of the Battle of Cognalorilos during the New Cyrandia Wars, the planet has fallen firmly under the control of the Unified Order of Cognalorilos led by the Primarch Voro Acetenus. Nevertheless, the Sundering of the Cognatus continues, with the planet and much of Cognatus space being contested in a state of perpetual civil war between the Order and the Cognatus Empire under the leadership of the Archon Vos Adamae.

In ancient times, Cognalorilos was home to a notable presence of the enigmatic Oikoumene—a power which left much in the way of artifacts and installations scattered across the planet. Eventually, these remnants of the Oikoumene became treasured relics to the native Cogsangui, allowing them to quickly advance as a species into the vast void of space. Nevertheless, the planet remained dominated by often feuding clans and great houses, though these internecine conflicts rarely transitioned into full scale planetary or interstellar war. With the formation of the First Cognatus Empire, Cognalorilos became the center of government for the hegemony, a position it retained prior, during and after the Intergalactic War, when it fell under the sway of Voro Acetenus' Cognatus Remnant.

Voro Acetenus: "The day is ours, yes. The back of the Cognatus Empire has been broken and a new day has dawned for our people. And yet... Adamae escaped my blade. If he survives, he will assuredly continue to harass our efforts. And while the Galactic Empire may have aided us, they will not continue to be so accomadat-"
N'thavo Xellunaion: "Banish such thoughts from your mind, glorious leader. For too long we have been at war. Let us enjoy peace while we can and celebrate the liberation of our homeworld. As you say, a new era has dawned for our people. Let us reach for it!"
―Voro Acetenus and N'thavo Xellunaion discuss the future of Cognalorilos

With the rise of the Cognatus Empire during the Dark Times, Cognalorilos became the seat of an often harsh and zealous empire rivaling the power of the pre-Intergalactic War hegemony. While the planet would initially remain firmly under the control of the Cogsangui, this would change with the coming of the Oikoumene AI known as the Licent, which usurped control over the Cognatus to prepare for the arrival of the Primercer, an ancient Oikoumene leader who gained command over the fleets of the Cognatus, ruling Cognalorilos with an iron fist. However, his rule was not uncontested. The shiplord Thaur Vicliquam would spark a series of events which would ultimately lead to the formation of the Unified Order of Cognalorilos under the leadership of Primarch Voro Acetenus, who pledged to destroy the Primercer and defeat the 'dishonourable' Cognatus Empire.

During the final year of the New Cyrandia Wars, the Order would form a tenuous alliance with the Galactic Empire of Cyrannus—which likewise desired the destruction of the Primercer. Under the joint leadership of the Lord of Concordant Resolution, N'thavo Xellunaion, Primarch Acetenus and the Phaedric Lord Maethoruin, the Order and the Empire launched a massive invasion of Cognalorilos. During the subsequent Battle of Cognalorilos, the Cognatus Empire was resoundingly defeated, resulting in the apparent destruction of the Primercer and the disappearance of the Cognatus leader Vos Adamae.

Now firmly under the control of the Unified Order of Cognalorilos, what Xellunaion believed to be the beginning of an age of peace for the planet deteriorated into a full fledged civil war known as the Sundering of the Cognatus. Though the Cognatus Empire became seen as a terrorist organisation rather than a fully fledged empire as a result of their defeat, in addition to Acetenus' ad hoc position as leader of the Cogsangui, his control over Cognalorilos remains highly contested, by both religious fundamentalists loyal to the Archon Vos Adamae to secular authorities seeking to overturn the rule of a leader willing to ally with degenerates and pacifists.

During the Second Great Cyrannus War, the planet fell under attack by a makeshift alliance between the rebel Cognatus and the Great Star Dominion, which sought to destroy Apollo's New Republic Remnant. Although the Dominion was able to inflict heavy causalities, including killing Fleet Admiral Willelmus Cretacea, they were ultimately defeated and forced to retreat when the bulk of Acetenus' armada arrived.

Below the overarching Unified Order of Cognalorilos, which governs—or at least claims to govern—Cognalorilos and its clanworlds, the Cogsangui of Cognalorilos are divided into city states, which range in nature from mercantile states along the coasts of the world ocean to vast cosmopolitan centres of power, such as the Basilica, the planet's capital under the Cognatus Empire and now home to many of the alien embassies and consulates of the Cognatus Order's allies. Indeed, since the end of the Intergalactic War, Cognalorilos has enjoyed a cultural renaissance in which respect for species such as the Libertus and the Rambo Serindia replaced prior hatred, while modern structures and aesthetics often reflect the shift in the mood of the planet away from isolationism and toward membership in a larger galactic community.

Nevertheless, the great houses loyal to the ideals of the Cognatus Empire continue to preach religious fundamentalism and a return to Cognalorilos' prior state as a core world in a vast intergalactic theocracy.

With the rise of the Unified Order of Cognalorilos under the leadership of Voro Acetenus, much of the planet has become united like never before, with the Primarch organising the Council of World States—the legislative body of the Order representing the worlds and sectors loyal to the Primarch. Currently led by the Lord of Councillors, Ashel Tathok, the Council is based in the ancient City of the Ancients—a symbolic move designed to evoke the earliest traditions of the Cogsangui, in which their culture was defined by honour and not zealotry. 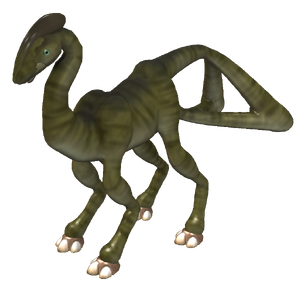 Menda
Ungulate
A species of ungulate ubiquitous throughout the planet, menda are culturally significant for the Cogsangui, who utilised the creatures as both a crucial food source and as a beast of burden, with many famous Cogsangui leaders in ancient times celebrated for their skills as menda riders.

City of the Ancients[]

The City of the Ancients, known in Hellrill'ae as the Th'khan Que'naesn, is an ancient settlement carved into the rocky cliffs near the edge of the Helrill Desert in the State of Acetenu. Though much of the city was covered in ruins from an earlier time in Cogsangui history, the Primarch Voro Acetenus decided to show his commitment to the old ways by decreeing that the capital of the planet would shift away from the Basilica to the City of the Ancients. Located deep within Acetenu territory, the city is regarded as safe from the conflicts which continue to ravage much of Cognalorilos. Indeed, the small population of the city are fiercely loyal to Acetenus, rebuilding the ancient city with eyes to the future but thoughts to the past.

A vast metropolis located in an inlet of the Jarnecr'on Ocean, the Basilica of Cognalorilos or Bero cous'in trac'en Cognatus, was long synonymous with the power and majesty of the First Cognatus Empire. Distinguished by bulbous structures, spires and religious sites, the Basilica reflects a period of Cogsangui history dominated by a fierce devotion to spread their religion to the stars. As such, the Basilica incorporates architecture from the other species loyal to the Cognatus, a fact reflected by the multiculturalism which sets the Basilica apart from other settlements on the planet. Though the city lies within territory dominated by Great Houses sympathetic to the Archon Vos Adamae, it is often the first port of entry for species from the galactic interior seeking to visit the capital of the Cognatus Order.

“This is our home. We will not let it slide back into the hands of cretins and barbarians!”

“I must admire the Cogsangui's efforts to keep their history intact. I can only wonder just how old those ancient cliff lairs must be.” 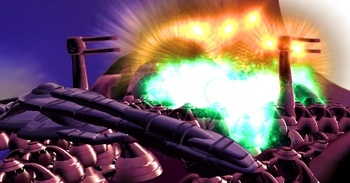 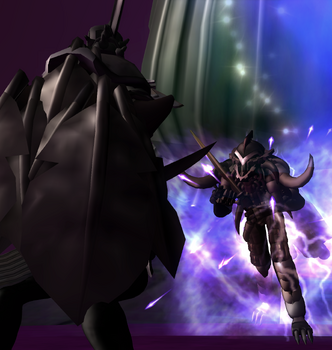 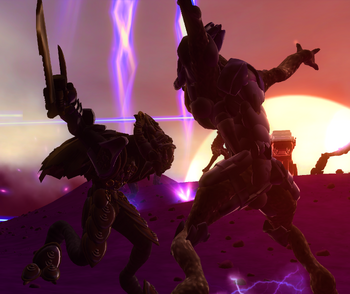