endless Space
*Space in Between

Legatus
Carnthedain, a shiny blue planet located in the area known as the Space in Between- a region of space best explained as a small area between the Quadrant Galaxies and the Cyrannus Galaxy and as such considered part of the Cyrandia Cluster. The Space in Between is heavily effected massive graviton anomalies surrounding the Quadrants. Carnthedain is a prominent planet located close to the wormholes leading to other galaxies and sectors and as such an important tactical location.

As a lush and green planet, Carnthedain is teeming with wildlife of different species and creatures and home to the mystical wood Aelfe/Elf race known as the Carnthuendi. The planet features lush forests and large tundras and various mountain ranges. In the north and south the polar lands of Carnthedain are located, but holds no life as the temperatures are too cold for the Carnthedanians to live on.

A peaceful planet for eons, its history is scarred by evil sorcerors and servants of darkness like Garlboz and Morgandaûr. With its discovery by the larger Cyrandia communities, Carnthedain fell prey to abusive powers and occupations by Legatus for the exploits of its natural resources.

In ancient past, the native Carnthuendi believed that the Atlantica blessed the planet and transformed it into a pradise. 180.000 years before 2798, the Carnthuendi Kingdom rose to full power and their society prospered an florished with their connection to the woods and their love for magic as the central keystones of their might and society. However, as their power grew, so did the corruption in few of them, resulting in the coming of the evil sorceror Morgandaûr in 2798 (0 BQF). The entity became known as the sorceror of Carnthedain and brought with him darkness and sickness to the planet, though the Carntheundi resisted his might and dark influence, and was seen responsible for Garlboz his fall to darkness as well.

In 2803 (05 AQF) Ramashe, empress of Rambo Nation was kidnapped and brought to Carnthedain by Morgandaûr, though was swiftly freed by the Carnthuendi that brought the attention of Rambo Nation to the planet and brought it under their protection. Shortly later, a small group of Carnthuendi was evacuatd from the planet to escape the sorceror's wrath though later returned after Claire Rambo managed to defeat the sorceror.

By 2820 (21 AQF), the planet fell under occupation of the Legatus and their Sector Fleet, exploiting the planet for its natural resources though some dissidents, like General Jar'Dris Ravencrow escaped and joined the Rambo Loyalist faction in hopes of driving the Legatus from Carnthedain. With the formation of the Sacratus, the remaining Carnthuendi returned to their occupied planet as they lost the support and military might of the Quadrantia powers and Serindia houses, causing a rift in their trust to Quadrantians.

Carnthedain features various locations, both inhabited while others feature the wonders of the local nature. Carnthuendi villages are easily recognised by decorated homes and surrounding floating lights.

The most easily recognisable location at Carnthedain is Ravencrow Castle, an ancient fortress raised by the legendary Jar'Dris Ravencrow and often seen as the bastion of Carnthuendi power. Its citizens often wear elaborate robes to indicate their status as well as their focus on study and the stars. The castle was constructed in the middle of a lake, with white stones and many towers the castle is easily defended by its two brdiges while its port can be sealed by various gates. Its central tower holds the court of Ravencrow and houses the actual living quarters of the Ravencrow family.

Deep within its dungeons the castle houses its prison and the tombes of the Ravencrow family.

The Carnthuendi of the Woods live at various locations with lots of nature, water and trees to indicate their harmony with nature. The largest Wood village lies near Ravencrow Castle, while smaller ones are scattered across Carthedain at both islands and mainland.

Village near the ocean and orientated with fishing

The Legatus Base of Carnthedain is manned by the 26th Regiment. The 26th stood under command of a Infantry major and deployed various assets of the Legatus Army, including Driver and Infantry troopers. Military equipment included LLAG's (3), ASP-V's (2), multiple LPSB's and LCAT's (3). The base featured various landing and docking ports for its assets, as well as two building housing its command center, the barracks and training rooms. It was equipped with a shield generator and various turrets for defense.

The industrial refining platforms were establisments dedicated to the refining of fuel. They could be found near the coastal areas of Carnthedain, refing fuel for the Legatus warmachine. It featured a tower structure and two cranes, including a small landing dock to transport the vital vials of refined fuel.

Local areas surrounding the platforms were often polluted, both air and sea. 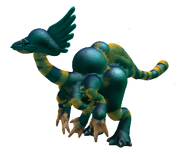 A Cardnuadon is a two legged and four armed creature, able to walk on two legs but also on all six. The creature is a humble and gentle herbivore, travelling in herds over the plains of Carnthedain in search of food. They are friendly with the Carntonathere and the Carnthuendi. Their eggs a a delicious meal for poachers. 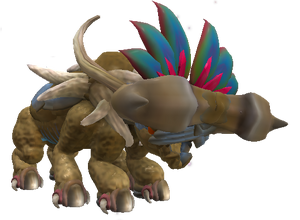 Carntanothere are massive, grazing creatures that roam the grassy plain of Carnthedain. Traveling in herds, it is fairly social, but also extremely territorial and hierarchical. Constant threat displays, both visible and audible, are very common during Carntanothere's day, when angerd, a Carntanothere will lower its head and charge at the percieved threat. The sheer momentum and ferocity of this display will send most running for cover. When wanting to avoid conflict, a Carntanothere will raise a large "fan" of brightly colored feathers on the top of its head, together with a loud roar.

A Carntanothere features six legs, an imposing hammerhead structure of solid bone. The creature has poor distance vision, but makes up for this with actue hearing and an excellent sense of smell. Its overlapping body plates and large, bony shoulder and back offer protection duirng battle with other Carntanothere or other being.

In the juvenile animal, the imposing hammerhead structure is formed of cartilage rather than bone. It can also bend to allow the animal to pass through the restricted spaces which an inexperienced young hammerhead might encounter. As it matures, the structure ossifies, and becomes solid bone. 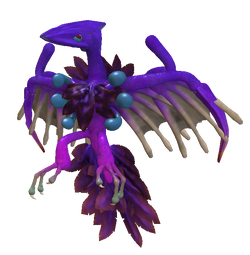 The Valaxion are bright purple colored bird like scions, flying the horizon for food and water. The Valaxion are noble and gentle beings, who posses a great sense of nobility and pride and are able to share a connection of understanding with the Carnthuendi. As a dual type Scion, the Valaxion posses strong wind type abilities, as well as being able to use psychic abilities.

The Valaxion are natives to the planet Carnthedain, where many of them have been hunted down by hunters and poachers, making their numbers dwindle. Legends at Carnthedain indicate, when in trouble a Valaxion can come to aid if they consider you worthy enough.