Cancerti is a planet located in the Calithilaen System of the Cyrannus Galaxy, counted among the Twelve Worlds of the Libertus. The most populous planet in the Four Systems, Cancerti shares an orbit with the traditionally agrarian world of Ariarona and is located in the now prosperous Heran Delta subsystem of Calithilaen. During the Intercolonial Wars, Cancerti was largely overcrowded and slums polluted even the capital city of Illumiana, while the democratic government of the planet was dismissed by most extraplanetary bodies as an oligarchy. With the unification of the Four Systems under the United Worlds of Calithilaen, the planet began to prosper, with gleaming skyscrapers replacing the slums.

Historically, Cancerti has been culturally linked to worlds such as Taurophon and Leonae, with the people of the planet garnering a reputation as a peaceful and open population, perhaps too eager to please the whims of more powerful worlds. This has been claimed to have accounted for Cancerti's history of being colonised by imperial powers such as Leonae and Virgon during its history, though few can dispute the importance of the world and the impact it had on the development of galactic democracy.

Like the other worlds in the Four Systems other than Capricaerón, Cancerti was populated with tribal Libertus in the distant past by Oikoumene intelligences working to ensure the continuity of the species. The largest terrestrial planet in the Calithilaen System, Cancerti quickly became home to tens of thousands of ethnic groups which spread to every continent of the globe. The most influential of these, the Caern, built a base of power around the traditional site upon which the Libertus first arrived on the planet, where the capital city of Illumiana now stands. Though many conflicts were waged between these ethnic groups, modern Cancertians are proud that their world was the first in the Twelve Worlds to unify under a constitutional democratic government.

Nevertheless, during the era of the Intercolonial Wars, the Cancertian government was regarded by worlds such as Capricaerón and Virgon as a corrupt oligarchy, known for supporting the often harsh regimes of poorer worlds such as Taurophon and its neighbour Ariarona. Indeed, during the Second Intercolonial War, Cancerti was one of the main providers of arms to Silas Homadoma's Taurophon government and was ultimately invaded by Capricaerón during the final stages of the conflict. Under the unified government of the Four Systems, Cancerti's slums were replaced by gleaming spires while the planet's overpopulation crisis was solved by the construction of massive arcologies and orbital megastructures.

During the opening attack of the Trucinex War, Cancerti was used as the base of operations of the Capricorn Sector Alliance against the invading Trucinex advance. Led by President Wilsa, the Alliance led a resistance against the Trucinex attackers, working to repel the invaders and make safe the Twelve Worlds. Several years later, Cancerti would fall under a more serious attack by the Imperial Alliance as retribution against United Republic of Cyrannus involvement in the Second Galactic War and the side of the Rambo. Besieged by the infamous Lizaconda of the Star Destroyer Liberty, the Imperial Alliance brutally suppressed the city of Delphinica before being defeated by a combined Rambo-Republic taskforce under the command of Willelmus Cretacea and Rambas II.

Like the other Twelve Worlds, Cancerti was viciously attacked by the First Cognatus Empire during the final battle of the Intergalactic War. Though the allies would fight to prevent the Cognatus from reaching low-orbit over the planet, they failed to prevent the Cognatus battlecruisers from glassing portions of the planet upon the destruction of the Republic defense fleet. Ultimately however, the Cognatus would be defeated over Capricaerón, with most of their forces retreating through a previously undiscovered wormhole. With the invaders defeated or vanished, the Republic worked closely with the government of the Four Systems to repair the planet's ecosystem and infrastructure.

By the time the Great Cyrannus War began, Cancerti had fully recovered. During the reign of the Galactic Empire of Cyrannus, the people of Cancerti largely accepted the Imperial regime for the first years of the Empire's rule, though had completely turned against it when the New Cyrannian Republic was established three years later. When the New Republic gained jurisdiction over the Twelve Worlds, the people of Cancerti rejoiced that their world was now a member of a democratic hyperpower, rather than a totalitarian state.

Cancertian society is amongst the most diverse in the Twelve Worlds, perhaps superceded in this regard only by Capricaerón. Indeed, this is to the point where Cancertian culture is actually an amalgamation of many hundreds of cultures spanning across the planet, influenced by a history that reaches back over three thousand years. While Cancerti was not without internecine conflict during the early modern and globalisation ages, pragmatism won the day over nationalistic grievances, resulting in the development of a cultural heritage which inculcated many dozens of often opposing ideologies, religions and philosophies. Today, Cancerti continues to be one of the most diverse worlds in the Core territories of Cyrannus, with the native Cancertians existing quite harmoniously with alien races and newly settled extragalactics.

With regard to fauna, Cancerti continues to recover from a mass extinction which wiped out most animal life on the planet over three million years prior to the Great Cyrannus War. As such, the land animals of Cancerti tend to be quite small in comparison to the other Twelve Worlds. Unlike worlds such as Capricaerón and Taurophon, where reptiles and saurians are dominant, Cancerti's ecological niches are filled by mammals on both land and in the oceans. The largest land animals, the two-metre long rabracen, are found throughout Cancerti's spawling subtropical forested zones while the massive sódecetus are amongst the largest marine predators in the Four Systems, reaching up to twenty five metres long.

Lexan Korr
United Worlds of Calithilaen
Lexan Korr is the current First Minister of Cancerti, representing the planetary parliament in the Senate of the United Worlds on Capricaerón. A consummate politician who has been known to put the interests of Cancerti over those of the other worlds in the Four Systems, she is nonetheless regarded as a centrist willing to cooperate with the other Worlds, provided that Cancerti also benefits. 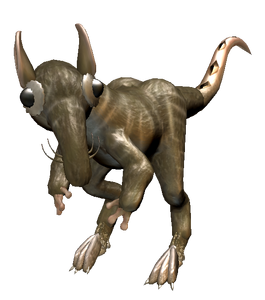 Lepticus
Leptictidan mammal
A common herbivore native to the dense subtropical forests of Cancerti, lepticus are a small species of bipedal mammal which moves by jumping across the forest floor. With disproportionately large feet and a large prehensile snout, the lepticus is one of the most recognisable examples of Cancertian fauna, though it is also vulnerable to both carnivores and territorial herbivores, with the speed of the lepticus being its only means of defense. Many Cancertians keep these small mammals as pets, while others find them to be unappealing pests. 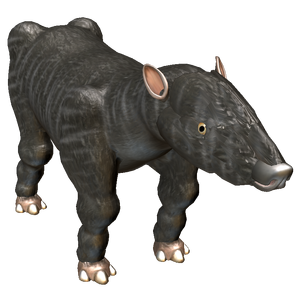 Rabracen
Ungulate
The largest terrestrial mammal on Cancerti, the rabracen is a primarily nocturnal mammal which can reach up to two metres in length. Foraging the forest floor for fruit and plant matter, rabracen tend to remain close to the water, utilising small ponds and lakes as watering holes, with the species tending to enjoy spending time in the water, particularly during the summer months. A solitary animal, rabracen were often hunted by primitive Libertus prior to the invention of the replicator.

Sódecetus
Whale
A species of hypercarnivorous whale, sódecetus are the undisputed apex predator of Cancertian seaways. A fully grown male can reach lengths of up to twenty five metres and unlike many other species of whale, they tend to be solitary animals, congregating in the warmer waters of Cancerti's equatorial region only to mate. Frequently engaging in surface activity such as breaching and and tail-splashing, sódecetus were regarded as the Queen of the Oceans by early maritime cultures, who learned to both fear and respect these marine hunters.

Illumiana is the capital city of Cancerti and one of the most important hubs of the Twelve Worlds. A bustling metropolis which sprawls across the island continent of Certórth, Illumiana was once one of the most deeply unpleasant places to live in the Four Systems, due to the poverty and overcrowding of Cancerti during the Intercolonial Wars. With the unification of the Twelve Worlds under the United Worlds of Calithilaen, Illumiana was largely ignored in favour of Delphinica, the second city on the planet and one more ameniable to the tastes of visiting dignitaries. By the establishment of the United Republic of Cyrannus, the city had become a gleaming beacon of progress, with towering spires and arcologies replacing the slums.

“The Battles of Cancerti. I remember them well. Where our resolve was tested against those who sought to do us harm. May the souls of those who died to defend her find peace amongst the stars.” 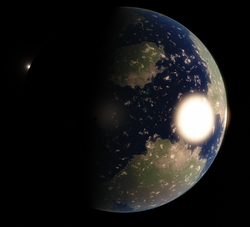 Retrieved from "https://spore.fandom.com/wiki/Planet:Cancerti?oldid=769020"
Community content is available under CC-BY-SA unless otherwise noted.