Loobo, other bacteria and protists

Mostly under the ice

Nivenian Empire
Caeruleo 6.9, the largest moon of the sixth planet in the Caeruleo system, is perhaps the most valuable object in the Caeruleo system to the Nivenian Empire, though perhaps they do not know it yet. Caeruleo 6.9 is special for two reasons: First, it produces enough purple spice to outstrip the production of twenty regular purple spice planets. Second, it is the homeworld of the Loobo.

Caeruleo 6.9 is not a legitimate moon of Caeruleo 6, as can be easily found out given the lack of carbon on the planet, and the abundance on Caeruleo 6. Rather, Caeruleo 6.9 was a rouge planet moving in roughly the same direction as the Nivenia system, and later the Caeruleo system, for hundreds of millions of years after its unpleasant ejection from its home system. Caeruleo 6.9 had a close encounter (>0.5 ly) with the Nivenia system six hundred and twenty million years ago, seeding it with its diverse microecosystem. Nivenia Prime was the planet that the microorganisms found the most hospitable, and Nivenian life began with developments such as eukaryosis and sexual reproduction as a result, which coupled with the intense radiation from its star allowed it to develop so quickly.

About seven hundred million years ago, the Loobo on Caeruleo 6.9 developed a mechanism for coping with the barren environment above the ice layer. The Loobo, a relatively minor lifeform at the time, developed the ability to crowd around uranium deposits and absorb neutron-activated carbon-14. Once the cell had ~0.05% of its mass in the form of carbon-14, it would create a small chunk of graphite inside itself.

In the event of being exposed to the vacuum of space, the cell's membrane would dry out, thicken, and form a cyst, while a smaller membrane would form around the graphite crystal of carbon-14. As the water inside the inner membrane would be very slightly warmer, it would have a higher rate of autoionization, and ions could be exchanged between the two membranes to form a sort of heat engine. Interestingly, both the cyst itself and the inner wall would become excellent thermal insulators, meaning that the outer layer might have a temperature of almost zero Celsius, while the inner layer might be as high as seventy. This process could sustain the cell for thousands of years, long enough for cryotectonic forces to pull the cell back into the subsurface ocean.

When a meteor hit the surface, however, any Loobo hibernating above the ice would be thrown out into interplanetary, or even interstellar space, and they could drift for thousands of years until they crash-landed onto a habitable planet.

When underwater, the Loobo harness geothermal energy by breaking down compounds ejected by hydrothermal vents. This process produces many byproducts, one of the largest of which is a chemical widely known as purple spice.

Caeruleo 6.9 is covered by a crust of ice two to four kilometers thick, with a two hundred and fifty kilometer ocean beneath. The planet's core heats the ocean, which is filled with nutrients, microorganisms, and bits of purple spice. 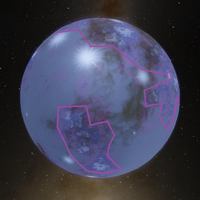 The purple spice deposits are higlighted in this image. They can be kilometers high.
Community content is available under CC-BY-SA unless otherwise noted.
... more about "Caeruleo 6.9"
RDF feed
Creator
SoftXrayEmmiter108 +
Downloadable
yes +
Image
Caeruleo 6 9.png +
Advertisement