Boronia is a water-moon located in the Argoroth-Secftor, a colony part of the Boronia Civilization, a nation of green amphibious humanoid beings.

Boronia was founded ages ago, long lost in the chronicles of the Boronia though it was one of the first colonies settled by them. The waters of the colony were used to provide most of the other planets of the Boronia with water and over time even beyond their own borders, as water was a spare resource in the Endless Space-sector known as the Argoroth Sector.

The moon holds a strong rivalry with Gorgorthrond, as slaver often manage to abduct female members of the Boronia. The planet's main and only street crosses the entire length of the planet, protected by a fleet of their cruisers that can operate both in space and underwater, a precaution against the ever present threat of a Mandabit harvest.

It is also known to hold diplomatic ties with the mysterious and dangerous T'varuuh. In july of 04 AQF, the planet came under attack by the dreaded Mandabit who harvested the planet, killing thousands, though some managed to escape under water or with aid of the Rambo Nation starship, the USS Elgorodaurl.

As the planet only features one street, running the entire length of the moon the main street is long, filled with houses, appartments, shops, restaurants, docking facilities, swimming docks and more. The street also holds various schools, shelters and malls. The houses are build quite solid, with white stones imported from elsewhere and featuring red roofs and black markings.

The Boronia Main Street runs from 0 up to over 4205 house numbers, with many restaurants the planet is a populair trade post for those travelling between the hostile sectors of the Argoroth Sector. 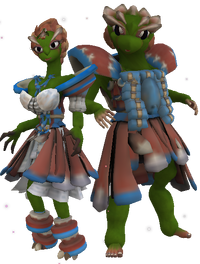 The Boronia are a green skinned amphibious humanoid species, capable of breathing air as well as under water. The Boronia feature typical humanoid features, being bipedal, two arms with hands and humanoid faces and organs.

The Boronia prefer water or rainy areas above hot and dry climates, though also dislike the cold of snow and can die when caught in freezing temperatures.

In a general rule, Boronia are often joyful, kind, gentle and enjoy joking and listening to stories, learning new cultures and enjoying both their own and alien arts. They dislike hard noises and prefer the calm sounds of nature and the seas. Boronia are also known to be devoted to their sacres believes and holy vows, a very religious people they refuse to accept or tolerate other believes, though will not enforce their own upon others. Females are often abducted for their looks by the raiders of Gorgorthrond, while the males have proven to be excellent slave miners and construction workers.

In battle, the Boronia have a zealot lust for vengeance and desire to defend their homes onboard their large, blue colored vehicles that can fire powerful yellow beams of energy, capable of ripping ships apart with a few shots. Their ships use somekind of vortexes to travel large distances of space. Their cruiser can both operate in space, air and under water. 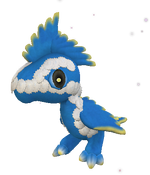 Blua are small bird like Scions found at Boronia, often found pests by the native inhabitants due to their annoyance and stubberness to stay away from food places, they are known to steal food from restaurants and customers who are still eating.

They can use wind, water and ice abilities to protect themselves against harm. Many Blua are also kept as pets by the native Boronia, as many find them adorable. 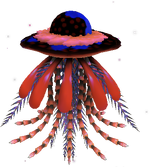 The Boronia Jellyfish are colorful Jellyfish, though their sting hurts and can cause skin irritation, the Jellyfish are far from deadly and can often be played with due to their curious nature. The Jellyfish use their tentacles as a way to propel themselves through the water and to catch small planton, though can also use them to defend themselves when fealing threatened. When taken out of the water, the Jellyfishes will dry out and die after a period of time.

Retrieved from "https://spore.fandom.com/wiki/Planet:Boronia?oldid=697477"
Community content is available under CC-BY-SA unless otherwise noted.