The planet Boreas was settled by the Elen'Nanethian in 2794 (04 BQF), shortly after first contact between Rambo Nation and the Capricorn Sector Alliance. Upon settling the planet was known as a winter planet, frozen and cold with thundras and not the most ideal climate for Libertus. After the First Galactic War ended in 2794, the young settlement in 2798 (0 BQF), the Ramboidae authorities granted the Capricyránae full membership within Rambo Nation with Boreas as their seat of power. Their representative would become senator Adar. Over time the Elen'Nanethian ventured onto other planets as well, but most consider Boreas as their home.

Upon the enforcement of the Nim-Glaré Concordat in 2803 (05 AQF) things changed for the Elen'Nanethian and Boreas. The planet became more isolated and the planet fell under the watch of the Galactic Empire of Cyrannus. With public opinion turning against the Libertus in general due to the cruel Imperials- plus the additional rise of power of Maketh Triggant Boreas faced a major change as Climate Control Centers were installed at the planet. This terraforming melted the snow and a more warmer climate was generated at the planet. In the following years under supervision of Triggant Estates Boreas was industrilized and a massive orbital ring was constructed.

After the fall of Rambo Nation in 2819 (21 AQF), many citizens feared reprisals or an invasion of the Rambo Loyalist and the Cyrandia Resistance and as such the general idea of forming their own state became more and more accepted. Shortly after the fall, Maketh Triggant was appointed as their new Mandator after the sudden dissapearance of senator Adar. Shortly after the battle of Pauvenris in 2820 Boreas became the capital of the newly risen Legatus.

The surroundings of the city are heavily patrolled by AT-AT walkers.

The Boreas Metropolis is a massive city covering at least a quarter of the planet Boreas. Once just a small settlement, the industrilization by Triggant Estates transformed the site into one massive metropolis with appartment buildings, houses, skyscrapers and arc bridges that cover the rivers. The capital tower houses the seat of the Rector provinciae and is used by him as his personal living area. In addition the capital building also holds the monthly Mandator meeting.

The metropolis is crowded yet foresees all the citizens require, from shopping malls to cinemas and hospitals. Notable features of the metropolis include the military base in the center of the city near the spiral capital building, its golden roof skyscrapers and its notable landing docks for small freighters and shuttles. The landing docks are a typical Triggant design.

Boreas Capital District, with its capital building and the military base

The Boreas Orbital Ring is a massive facility that encircles the entire planet. The ring is in fact one major military facility which both produces and repairs the naval vessels. It also houses a large contingent of walkers and quarters for the military forces. New Legatus military forces are trained at the Boreas ring as well. The ring features numerous hangars with either fighters or ground forces. Rumors have it that they rotate on a montly bases to prevent to reduce the possibility of enemy forces knowing where and when fighters are stored.

The Orbital Ring is defended with ion cannons and as such is a stronghold for the Legatus as well. 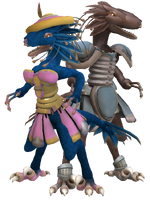 Wildlife on the planet were introduced on Boreas from planets within the Cyrannus Galaxy. The Astersaurolophus is a large hadrosaurid native to Capricaerón and introduced on Boreas during its settling. It is a common species on the planet and often ventures near the outskirts of the city. At eleven metres long, the Astersaurolophus is a large hadrosaur known for the elongated crest on its head, which allows this beloved herbivore to emit hauntingly beautiful cries.

The Vogazard are a race of intelligent lizard-like reptiles native to the tropical regions of Achiliquin and also introduced at Boreas. The general view of these beings is that they are loyal and peaceful creatures - they poeple often make the mistake of being ignorant of their highly territorial nature while protecting their nests from predators. Nevertheless, the Vogazard are common pets in ranches across at Boreas.