“This world is lovely. Just lovely. All the... rain. And the rocks! I quite like the rocks.”

Antemurale is a perpetually stormy planet in the Outer Rim famous for being the headquarters of the Imperial Military. Colonised millennia ago by the Rades of Andromeda in order to show their teachers how far they had come, Antemurale was terraformed from the once lifeless world into a lush rainforest world. The Rades defended the planet against invasion by installing a sophisticated techno-organic defence system, led by the AI called Netzach. This system connects the entirety of the planet's ecosystem, meaning that even wildlife and plantlife would fight to protect Antemurale if it was ever invaded. However, events in their home galaxy forced the Rades to abandon their fortress world, which soon became embroiled in constant storm. Nevertheless, the planet became home to a race of crimson skinned reptilian humanoids known as the Phaedra, who launched many assaults on the First Republic deep in prehistory, only to fade into obscurity.

However, the strategic location of Antemurale as well as its abundance in Rade technology made the planet a key target for many colonising powers. However, all would fail until the rise of the Galactic Empire of Cyrannus, which conquered the planet using the Oikoumene influences present in Imperial technology. Antemurale's location in the Outer Rim prompted the Imperials to establish the headquarters of the Imperial Military in the Imperial City on Antemurale, with its central tower known as the "Bastion" making use of hyperspace wormholes to instantly connect Antemurale to the capital world Orbispira. Despite the strong Imperial presence, Antemurale holds many secrets lurking in its dense jungles.

Antemurale was a lifeless rock when it was colonised by the ancient Rades, a race of precursors originating from the Andromeda Galaxy. The Rades sought to gain the approval of their teachers by showing them how far they had advanced, ultimately turning the planet into a veritable beacon of life and beauty envied by all within the planet's vicinity. In order to protect this precious planet, the Rades created an advanced artificial intelligence system known as "Netzach", which could control the planet's very ecosystem and use it against potential enemies. Though Antemurale prospered under the Rades, events in Andromeda forced them to withdraw, leaving Antemurale to develop independently.

This caused the planet to become enveloped in perpetual storms though this did not impede on colonisation, with the crimson Phaedra colosing the planet from their homeworld of Phaedron in the years to come. The Phaedra would construct a vast, militaristic empire that would often wage war against the First Republic. Despite this important role in the history of the galaxy, the Phaedric Empire would eventually fade into history, leaving Antemurale once again on the fringes of galactic events.

Mortgerro: "Lord Palivan of the Sphere of Intelligence believes such an attack is impossible. We should not waste resources on a hopeless cause."
Tyermaillin: "We do not need to hold the planet, we simply need to send our citizenry a message that even the heart of the Imperial military is not safe from us."
―Lord Mortgerro and Imperator Tyermaillin

Though the planet remained unknown to both the Confederacy of Allied Systems and the United Republic of Cyrannus, it was eventually settled by the Galactic Empire of Cyrannus during the opening months of the Dark Times. Due to the nature of the Empire's leader, Netzach allowed the Imperials to construct vast cities and fleets both on the planet's surface and above it, ultimately prompting the Emperor to develop Antemurale as the main hub of the Imperial Military. During the New Cyrandia Wars, despite claims that any attack made against the planet would amount to suicide, a Cyrannian Imperial State fleet under the command of Imperator Tyermaillin attacked a Space Station above the planet, sparking the Battle of Antemurale.

Though the Empire was victorious thanks to the arrival of a Rambo Nation fleet, the battle was embarrassing to the Empire, who failed to destroy the entirety of the State fleet. Infuriated by the failure of the Imperial forces to destroy the State fleet, Grand Mandator Taev Vosaetiur had the commander of the Antemurale Space Station executed to serve as an example to those who would fail the Empire. Throughout the remainder of the conflict, the planet remained untouched.

During the closing stages of the Cyrannian Cold War, Imperial Intelligence agent Caranye was redirected to Antemurale to root out and destroy a Resistance cell operating in the jungles. There, with the help of Voe Dirais and the Eternal Enigma, she discovered that these rebels were being manipulated by the Phaedric Lord Ruuvitharn. After destroying the rebels, Caranye returned to the Imperial bastion, where she discovered that the Empire knew of Ruuvitharn's betrayal, though she was ordered not to investigate.

On Antemurale, Imperial rule is paramount with the levels of propaganda and indoctrination to the Empire being amongst the most prevalent in Imperial space. From the towering Citadel at the heart of the Imperial City, the government of the planet works to ensure that any and all dissent is dealt with immediately, efficiently and painfully. Indeed, while no society is devoid of the potential for violent dissent, tightly controlled populations such as those in the cities of Antemurale are the most prone to violent uprisings. As such, the Imperial administration has taken every precaution to ensure that any attempt at violent or peaceful revolution is doomed to failure. Other than the occasional terrorist attack however, Antemurale's people are amongst the most loyal to the tenets of the Empire, a loyalty no doubt enhanced by the dark powers of the Phaedric Order which call the planet home.

The colonisation of Antemurale by the Empire during the early years of the Dark Times brought the Imperials into contact with the harsh jungle world, enveloped in eternal storm and inhabited by violent predators such as the alfrekah and the strigarachon, all of which desperately vied for the flesh of the colonists. Indeed, despite the high technology of the Empire, the wilds of Antemurale remain exactly that, with the Imperial administration quite happy to ignore the vast jungles beyond their imposing metropoli. 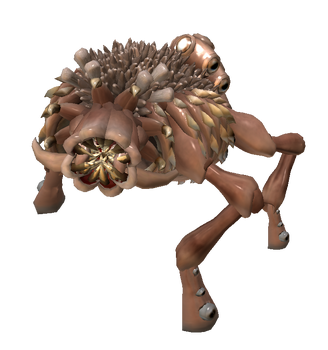 Alfrekah
Invertebrate
The Alfrekah are a species of loathsome predatory invertebrate which stalk the endless jungles of Antemurale. Though primarily nocturnal, the eternal cloud cover of Antemurale has resulted in the evolution of a heightened sense of smell to detect their prey, with the alfrekah evolving without the use of eyes. Though unintelligent, alfrekah often hunt in packs, utilising their strength to hunt down and kill other animals. Despite their nature as an apex predator in many Antemuralan regions, the alfrekah are hunted by the larger strigarachon in regions where the two species co-exist. 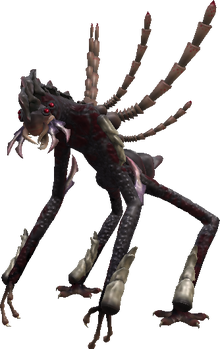 The Imperial City is the capital of Antemurale and is often considered to be the political centre of the Outer Rim, particularly after the so-called Vasubandian Rebellion. Massive skyscrapers dominate the skyline, giving it the appearance of a typical Imperial settlement despite its additional function as a nigh-impenetrable fortress protected with some of the Empire's most powerful ground defences and shield technologies. Viewed as the Eternal City by its inhabitants, the city rises from the jungles of Antemurale, looming over the city and its "proud and loyal" inhabitants, all of whom work toward the glory of the Emperor and his Empire. The primary structure in the city is the vast Citadel of the Empire, which houses the headquarters of the Imperial Military and the enigmatic Phaedric Order.

“Such power resides on this planet. Power I aim to exploit.”

“Fitting for the world of the Phaedra to house such a strong Imperial presence. My people would be pleased.”

“This place makes me feel queasy. Like I'm being watched by something...” 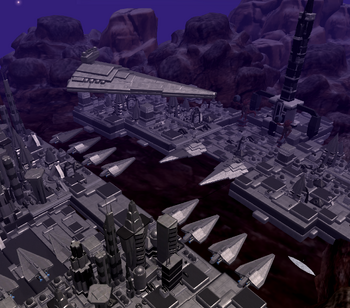 Retrieved from "https://spore.fandom.com/wiki/Planet:Antemurale?oldid=748986"
Community content is available under CC-BY-SA unless otherwise noted.