Alethena Metru is an ancient city dating back to 79.000 BQF and was a bastion of the famous and holy Atlantica. It stood as their bastion and was one of their greatest cities of its time. However when Artmyris betrayed the Atlantica the city was abandoned and the Atlantica left the place around 50.000 BQF. For millenia the planet was left alone, until its discovery by Rambo Nation.

Upon its subjugation by the Empire, the Imperials removed all modern buildings and presence and returned the site to its original composure. With the rise of the Dinotopian Republic, they turned the place into an archeological site and allowed tourists to visit the place albeit only with a guide.

The planet, then still located in Quadrant 21 was discovered by Rambo Nation during their exploration and they soon settled down. Soon a saloon, a Serindia bank and an Ivalaë hotel was build just outside the city. The planet was the side of a peace treaty with the Serlgmec and the Cogsangui who both expressed interesst in exploring the planet. During the Torments of Arcaniox-events the planet was relocated to Quadrant 82 and gradually was abandoned by the Ramboidae and by the fall of the Nation in 2819 (21 AQF) by the Galactic Empire of Cyrannus all modern traces of the Ramboidae were removed.

With the formation of the Dinotopian Republic in July 2820 the planet once again became a famous archeological site, though the Dinotopian goverment forbade settlers to settle down. Instead the planet was allowed to be visited with tourists under supervisions of guides. Those that were lucky or rich enough could spend a single night in the ancient city to experience the so called "Atlantican Experience".

Scientists believe the city provided all the luxary the citizens of Alethena Metru required to live in harmony with nature and each other. The ancient Atlantican building style can be found on various other planets throughout the Cyrandia Cluster as well that have Atlantican origins.

The planet is often seen as a prized possesion by the Dinotopians, often at the dismay of other Atlantican followers who believe the place should be free to visit as in the old days of Rambo Nation. 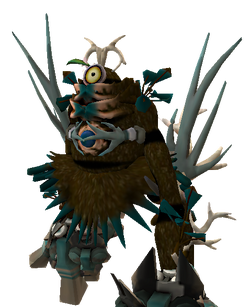 The Golviatan Scions are a tree/plant like grass scions and native to Alethena Metru. Large and dangerous, these creatures posses tremendous size and are about the size of a near Epic. Yet when they trust you, they can be very kind and will protect you with all its might.

Golviatan Thea is made using the fallen leaves of the creatures.

Retrieved from "https://spore.fandom.com/wiki/Planet:Alethena_Metru?oldid=811181"
Community content is available under CC-BY-SA unless otherwise noted.