Libraé: "I sensed that this world was new... but if what you say is true, it was simply lost. Impossible to be found until the proper moment."
Messenger: "Yes. Aldár has been one of the most important worlds for the Oikoumene since its formation. It houses the sanctuary of your forgotten leader, he who would restore light to the Oikoumene, he who would heal the rift caused by the Vectors of Chaos and Order."
―The First Elda Libraé and her Messenger during the Apotheosis

Aldár is a mysterious planet located on the fringes of the Unknown Regions of the Cyrannus Galaxy, far beyond any of the known civilisations of the galaxy—though ultimately significant to the fate of every single one. Aldár exists within an Oikoumene-forged bubble of space-time, seemingly impenetrable and unchartable until the "proper moment". Indeed, Aldár is of great importance to the enigmatic mystery of the Oikoumene, seemingly playing a role in the so-called Lost Aeons prior to the rise of the Vectors of Chaos and Order. During the Apotheosis, a series of events took place which ultimately led to the leader of the Oikoumene, Libraé, to discover the Lord of Light Apolithanatár deep beneath Aldár's surface. The consequences of this fateful meeting are, as yet, unknown.

Countless millennia later, an order of warriors and sages under the leadership of Master Du'utahrovin rediscovered Aldár, giving rise to the First Aldárae Order. This order would eventually fade into the dust, though during the Cyrannian Cold War, events seemingly foretold by the Annals of Valin'uvalyë, once again thrust Aldár to galactic importance—playing host to events which would forever change the course of the Cyrandia Cluster, giving rise to those who stand as a beacon of light to cut through the shroud of darkness cast by Tyrómairon, Morgandaûr and their hold over the cluster.

Indeed, in 14 NE, upon the return of Apolithanatár, the Aldárae Order was formally re-established in the great temple of Aldárae, with the wise masters of the orders negotiating a successful alliance and partnership between their restored order and the New Cyrannian Republic. As the end-point of one of the Republic's newest hyperlanes, dubbed the Aldárae Way, the planet became a centre of learning and knowledge to rival any in the Gigaquadrant.

“The inhabitants of this world... and indeed this world's history have been long forgotten by the Oikoumene. But not through the passage of time. Rather, it was removed from the collective memory of the Oikoumene, until such a time as this comes to pass.”

A world shrouded in mystery, the origins of Aldár are a source of contention amongst the scholars of the Aldárae Order, though it is apparent from the ancient records of the Oikoumene that it exists as a nexus of the Valin'uvalyën powers of Darkness and Light, with the Light of the Aldárae and that of Apolithanatár permeating much of the planet. When Apolithanatár first locked himself away prior to the rise of the Vectors of Chaos and Order, he blocked all memory of Aldár and the role it played in the origins of the Oikoumene from their collective memory, ensuring that the world would remain untouched until the proper moment.

During the second era of Apotheosis, the First Eldá of the Oikoumene, Libraé, was drawn to Aldár by her mysterious Messenger of Valin'uvalyë, who claimed that the world held the power to set the Oikoumene on the correct path once more, uncorrupted by the Vectors, who had brought warfare and strife to the once peaceful Oikoumene. There, she gazed in wonder at the raw beauty of the planet, before being transported to Apolithanatár's realm of self-imposed exile. What transpired beyond that fateful meeting is currently unknown, though it is clear that upon the final Apotheosis, Apolithanatár returned to Aldár, once again locking himself away, seeking to atone for his actions.

Untold millennia came and went on the hidden world, with the sole inhabitant being the mysterious being known as Du'utahrovin, hailing from a race created by the Oikoumene to serve as guardians and loyal friends. On the Peak of Ages, Du'utahrovin watched events unfold across the Gigaquadrant for millennia, having a crucial role in the formation of the First Aldárae Order, to fight against the dark influence of the Nagith and Phaedric Empires during the First Republic-era of Cyrannian history. However, while the First Aldárae Order would remain in the shadows in their fight, with the fall of the First Republic, it would fade into ruin, with only a few select individuals continuing the Aldárae legacy.

“We must reveal ourselves to the universe, to stand against the darkness as the guardians of the New Republic. As of this day, we delcare the Aldárae Order reborn!”

In the decades prior to the Great Cyrannus War, individuals such as Ryen, Alinor Nanuq and Aenaró felt the call of the Light, leading them to Aldár at the behest of Du'utahrovin. While the small group did not reform the Aldárae Order, they nonetheless spread throughout the Gigaquadrant in an effort to ward off the growing influence of Tyrómairon and his followers, upon their awakening during the Intergalactic War. With the fall of the United Republic of Cyrannus and the rise of the Empire in its place, Aldár remained in the shadows of the galaxy, with Du'utahrovin unable to explain how the world seemingly removed itself from the Empire's reach.

During the Cyrannian Cold War, Ryen returned to Aldár with the crew of the Auethnen Raptor and began training the young Kara Inviá and Aoirtae Valaeris as students of the Aldárae. For four years, Ryen trained the young women in the ruins of the Aldárae Temple, though ensured that the duo remained unaware of the existence of Du'utahrovin and the other Masters of the Aldárae until the proper moment. When the time came, Du'utahrovin called out to Aoirtae from the summit of the Peak of Ages, prompting her to journey to the mountain. On the way, she chanced upon Master Aenaró, who led her up the mountain to meet with Du'utahrovin.

The dragon lord presided over the completion of the young woman's training, involving an adventure in a dark cave, within which Aoirtae faced her worst fears, her deepest regrets and visions of events yet to come. When her training ended, the crew of the Auethnen Raptor travelled to Aecor, where they retrieved the mythical Zevian Skull, which promptly teleported them back to the Aldárae Temple, which was under attack by the Phaedric Order and Morgandaur. When they drove them off, Du'utahrovin told Aoirtae to grasp the Skull and return with Apolithanatár—the Oikoumene Lord of Starlight and the one being who could defeat Tyrómairon.

In her absence, Ryen and the other Aldárae Masters set about repairing the Aldárae Temple and restoring the vaunted Order. For two years, they recruited new members from across the Gigaquadrant, though made certain that the Empire remained ignorant of their ultimate intentions, despite knowledge of the planet now being known to their Phaedric foes. Soon after Aoirtae returned with Apolithantár, Ryen officially declared the Aldárae Order reborn, working with Senator Apollo of Capricaerón to forge an alliance between the Order and the New Republic. Now an associate member of the Republic, Aldár became a centre of learning and enlightenment rivalled by few in the cosmos.

The Aldárae Temple is the beating heart of the Aldárae Order, and of Aldár itself, built over the ruins once occupied by the mysterious first iteration of the Order during the era of the First Republic. This structure, which was occupied for several years by Ryen, Aoirtae Valaeris and Kara Inviá during their training, was largely destroyed during the Battle of Aldár, and rebuilt as a tranquil and meditative retreat—serving as both the bastion, and the home, of the Aldárae.

The new Temple was primarily built around the ancient ruins of the near-mystical Válrenaeum, which houses one of the Cyrannus Galaxy's most complete archive of information. Indeed, while the Válrenaeum's knowledge is incomplete, it remains a bountiful source of knowledge to the members of the Order, propelling Aldár into a premier Gigaquadrantic site of study. Beyond this great library are open corridors filled with members of the Order, be they knights bestowed with the power of Valin'uvalyë or scholars, imbued with wisdom about the cosmos and the esoteric lore of the Oikoumene.

The Temple was built using Aldáraei stone and timber from the nearby forests, shaping the training halls, offices, chambers and meeting rooms of the Order, setting the Temple apart from the modern Cyrannian-style of architecture, which is distinguished by an emphasis on opulence and grandeur. This simple styple serves as a symbol to the safety and tranquillity one can find in the Temple, which in turns serves as a beacon of serenity, knowledge and determination in the Empire's ultimate defeat. 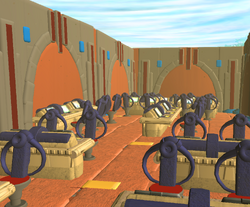 “Even with the entire galaxy going to hell, on Aldár, everything seems so peaceful, so... removed from it all. I only hope that it lasts.”

Retrieved from "https://spore.fandom.com/wiki/Planet:Ald%C3%A1r?oldid=790497"
Community content is available under CC-BY-SA unless otherwise noted.